Home › Imperialism › Economic Exploitation › The Question of the State

The Question of the State

No question has been more confused by capitalist scholars than that of the state, since no other question is as vital to the interests of the ruling classes. Capitalist ideologists picture the state as some kind of “supernatural force” standing above society that has existed since time immemorial. It supposedly has no class character and is merely a neutral “instrument of order,” an “arbiter” called upon to resolve disputes which may arise between people regardless of their class affiliation. Such a “theory” of state serves to justify the privileges of the bourgeoisie and the existence of exploitation and capitalism.

In contrast to bourgeois ideologists, Marxism has demonstrated that the state is not something introduced into society from the outside, but is a product of society’s internal development. The state was brought into being by changes in material production. The succession of one mode of production by another causes a change in the state system.

The state has not always existed. Primitive society which had no private property and no classes had no state either. Naturally, there were certain social functions, but they were performed by men chosen by all of society which had the right to dismiss these people at any time and to appoint others. In those distant times relations between people were regulated by public opi

The further development of the productive forces, as we have already observed, led to the disintegration of primitive society. Private property appeared, accompanied by classes—slaves and slave-owners. It became necessary to protect private property, the rule and security of its owners, and this brought the state into being. The birth of the state and its further development were accompanied by a fierce class struggle.

In an antagonistic class society the state is a political instrument, “a machine for maintaining the rule of one class over another.” The class dominating economically, i.e., possessing the means of production, acquires in the state a powerful instrument for the subjection of the oppressed and exploited. The state has a clearly defined class character. Being the principal component of the superstructure founded on the economic basis of society, the state takes every measure to strengthen and protect this basis.

What are the features of a state?

The main feature of a state is the existence of public (social) authority representing the interests of the class which dominates economically and not of the entire population. This authority rests on armed force—the army and the police.

In primitive society all the people were armed. But in a society divided into hostile classes, the armed forces are in the hands of the ruling class and are used to suppress the people, to subordinate them to a handful of exploiters. Representative bodies (parliaments), the huge bureaucratic administrative machine with a whole army of officials, intelligence agencies, the courts, procurator’s offices and prisons—all are used for the same purpose. All of them combined make up the political authority of the exploiting state.

While in primitive society people settled in consanguineous groups, in a state the population is grouped territorially, i.e., in districts, counties, states, regions, etc. Territorial settlement is a result of the development of production, the increasing division of labour and the growth of trade and commodity exchange.

Bourgeois ideologists and politicians are fond of talking about the progressive role of the bourgeois state. They claim that only this state has brought the people full freedom, that it is the highest type of democracy, genuine democracy. Today reformists are particularly vociferous in this respect. They portray the bourgeois state as a force standing above classes, equally restraining both labour and capital. The capitalist state, in their opinion, has ceased to be the organ of only one class, the capitalist class, and now serves all classes in society. There is, however, no evidence to support the statements of the reformists about the progressive, democratic nature of the contemporary bourgeois state.

The bourgeois state, whatever its form, is dictatorship of the capitalists, a machine for suppressing the working class and all working people which always employs coercion against its class enemies in varying degrees and forms. With the advent of imperialism the bourgeois state directly turns towards reaction and assumes the inglorious historical role of defending the economic basis of imperialism which long ago became a brake on historical progress. 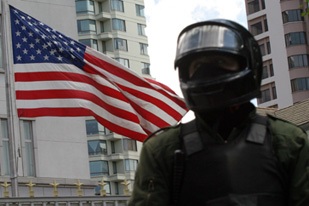 State-monopoly capitalism becomes widespread under imperialism. It combines the power of the monopolies with the power of the state into a single machine for enriching the monopolies, crushing the proletarian movement and the national liberation struggle, attempting to save the capitalist system and unleashing aggressive wars. The state becomes a committee for administering the affairs of the monopoly elite. In the interests of the latter the state constantly interferes in the process of capitalist production, applies various regulating measures and takes over individual branches of the economy in order to ensure the maximum profits to the monopolies.

The reactionary nature of the home and foreign policies pursued by the contemporary bourgeois state cannot be concealed either by oratory about freedom, democracy, human rights, references to bourgeois constitutions or declarations about the civilising mission of capitalism. The constitutions of many imperialist states are not wanting in articles proclaiming all sorts of freedoms and rights for all citizens universal suffrage, free elections, freedom of speech and of the press, and so on and so forth. In reality these freedoms often remain a dead letter for the overwhelming majority of citizens, for the working people. Only the bourgeoisie, which controls all the instruments
of economic and political domination, enjoys them to the full.

The “free” world of capitalism has millions of unemployed; in other words, bourgeois rule is unable to ensure the right to work for everyone.

However much the capitalists and their lackeys boast about the capitalist paradise, capitalism remains a system of oppression of an overwhelming majority of people by a handful of exploiters, a society where lack of rights, poverty and unemployment are the lot of millions of working people. The essence of “freedom” in the imperialist world is freedom to exploit the working class and all working people not only at home but also in other countries.

Under imperialism, the financial oligarchy increasingly resorts to the most reactionary methods of government—to outright terrorist dictatorship, to fascism; it relies on the army and the police as a last resort to protect it from the people’s wrath and hold up its inevitable doom.

Mankind has not forgotten the horrors of the fascist regimes of Hitler, Mussolini and their allies in Europe, the horrors of the Second World War unleashed by fascism. Dangerous signs of fascism, however, have reappeared in some capitalist countries. Complete subordination of the state to the giant monopolies, militarisation of the economy, expansion of the state machine, the frenzied drive against the working-class and the communist movement, persecution of peace supporters and members of other progressive organisations, racial discrimination and restriction of democratic freedoms—this is the content of the domestic policy pursued by contemporary imperialist states.

The foreign policy of contemporary imperialist states is also reactionary. Posing as champions of “liberation” of the colonial peoples, the imperialists are actually waging a vicious struggle against the national liberation movement and are imposing in new forms the very same colonialism which is so hated by the peoples. In order to gain control over countries which have formally won their independence, the imperialists inveigle them into their aggressive blocs, make use of economic “aid” to less developed countries and other means. They support reactionary regimes, engage in the arms race and have surrounded the Soviet Union and other socialist countries with
a ring of military bases.

The imperialist states, characteristically enough, pursue their reactionary domestic and foreign policies under the flag of struggle against the “communist menace” from the Soviet Union and the other socialist countries, despite the fact that neither the Soviet Union nor any other socialist country threatens anyone. On the contrary, the states of the socialist system are the most consistent fighters for peace throughout the world, for peaceful coexistence with the capitalist countries.

The working class cannot be indifferent to the form of bourgeois state that exists in its country. Despite the restricted nature of bourgeois democracy, it affords the working class more favourable conditions than open dictatorship for waging a successful struggle against the bourgeoisie, for the dictatorship of the proletariat and for socialism. That is why the working class in the capitalist countries, heading all the progressive forces, persistently combats the onslaught of the reactionaries, and fights for democracy and curtailing monopoly rule.