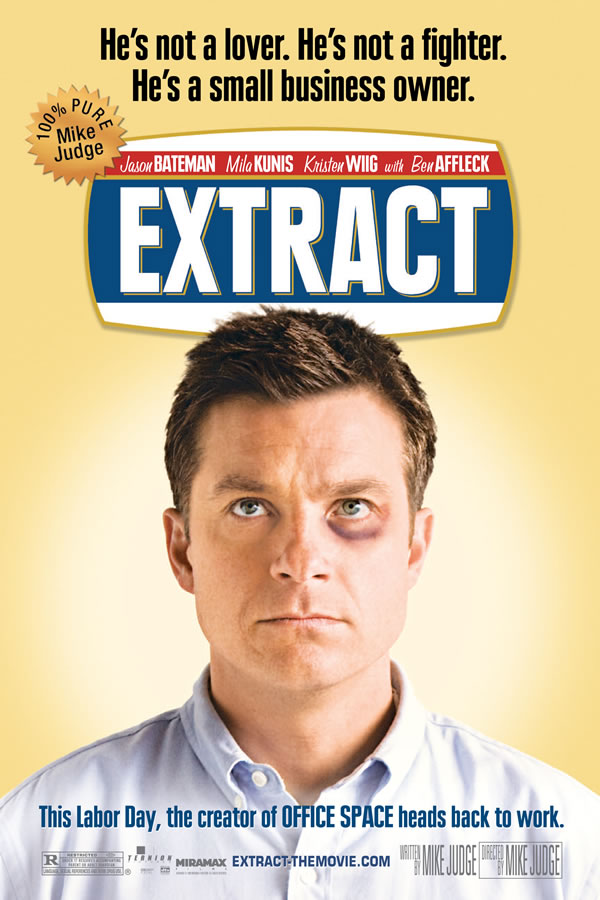 Extract, written and directed by Mike Judge, involves the personal and business struggles of a small business factory owner named Joel Reynolds (Jason Bateman) as he tries to sell his extract business to the General Mills corporation. There are many different conflicts and dynamics in this film, from larger political economy factors such as race, gender, and class to cultural dynamics, such as the importance of age and seniority. However, the overarching contradiction of the movie is the class struggle between the factory owner and his workers. Joel Reynolds is a “self-employed entrepreneur,” who in classical Marxist terminology can be understood as being “petty-bourgeois.”

Plot points include the Joel managing the fallout of having hired a male prostitute to seduce his wife, which he did in order to not feel guilty about having an affair of his own with an attractive female employee, and dealing with a pending lawsuit from an employee who lost his testicle to an accident on the work site.

Extract is more tripe from the mind of Mike Judge, who has a long and colorful history of creating reactionary entertainment. He brought us two apathetic adolescent males who don’t care about anything (Beavis and Butthead) in the early 1990’s, King of the Hill, a show that among other things supported George W. Bush’s presidency and advocated a foreign-sponsored coup in Cuba and Laos, The Goode Family, which seems to be Judge continuing his hackneyed stereotypes of progressives, and most famously Office Space, where the moral of the story seems to be that “stealing” from your corporate bourgeois exploiters “doesn’t pay”; instead you need to find a place in the status quo where you can be happy (being exploited), and not rock the boat.

This culminated also in Idiocracy, his wonderful romp into 19th Century Eugenics where he raises fears about “stupid people” outbreeding the “smart people,” which leads to a dytsopian future. In this scenario, IQ is based on biological determinism and not social factors (education, etc.). Take note that the “smart people” in the beginning are sweater-wearing and affluent, while the “dumb people” who are outbreeding them are working class and poverty stricken.

Considering Mike Judge’s long and distinguished history as an entertaining mouth-piece of backwards bile, Extract can be seen as his crowning achievement in this way.

Anti-Working Class Tone of the Movie

From the very beginning, we see workers viewed in a very negative light by the factory owner and his “second in command” Brian (J.K. Simmons). As the two talk about selling their factory to General Mills in the owner’s office overlooking the factory, they make comments such as “It’s like they are a bunch of children” and, in reference to an older woman employee, “Are we still thinking about replacing her with a machine?” 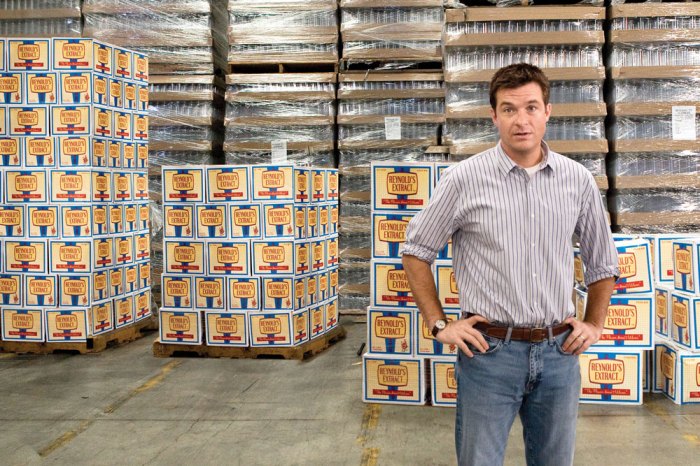 Brian’s dismissive and hostile attitude towards the workers is made apparent by his refusal to learn any of their names. Instead, he refers to them each as “Dinkus” (except for the fork lift operator, who he mockingly refers to as “boy genius”). The message here is that workers are ignorant, child-like means to Joel and Brian’s profit-driven ends that are to be treated with disdain. As such, their demands for increased pay or more time off are met with a feeling of incredulousness and are summarily denied.
The workers themselves are portrayed in a negative manner that follows suit with the petty-bourgeois outlook of Joel and Brian. They are shown not only as ignorant, but as petty and unprofessional. One instance that demonstrates this is the scene of the accident, where the old women workers (dissatisfied with the slow performance of their new colleague, a Latin American immigrant) cease doing their jobs in protest, leading to a back-up on the assembly line and a series of events (each displaying the incompetence of various employees, highlighted by Joel and Brian’s comments) that culminate in a worker being hit in the groin by a steam valve and needing to be medically evacuated.

Each worker in the factory is seen as having some kind of dysfunction which makes them less than ideal, from the old women on the assembly line who spend their work time talking to the forklift operator that is seen as being an incompetent “man child,” as well as the immigrant employees being seen as slow and lacking for their misunderstanding of English.

Workers Are Shown as Bumbling Fools in Mike Judge's Film

One character that particularly embodies the “blue collar worker” caricature offered by the petty-bourgeois management is the injured worker named “Step” (Clifton Collins). Step is portrayed as an ignorant, gullible, narcissistic “country boy” whose only means of making his point are to draw on tired, cliche “folksy” witticisms, which the managers mock him for. It is incredibly telling that even when Step declines to sue the company, his phrases “I wouldn’t want something for nothing” and “What’s right is right” are mocked by Brian, who would have much to lose if these attitudes weren’t taken by the employee who is declining to sue!

Elitist Outlook on Organizing
The anti-worker vibe of the film hits a high note when the workers attempt to organize to advocate for shares in stock in the company to be sold to General Mills. When Joel and Brian are having a meeting with a lawyer hired by Step to sue them (after the weak and ignorant Step is seduced into suing by a woman) the workers on the factory floor misinterpret the situation they see through the window as Joel making a deal with General Mills to sell the company. And so the workers, including the inept forklift operator and yet another blue collar stereotype, decide to “go on strike or do that walk-out thing” if Joel doesn’t give them shares in the company.

After hatching their plan in a fashion that is portrayed as ignorant and egoistic, the workers confront Joel in a manner that is seen as equally deficient, with the “legitimate authority” of the factory owner being seen as being questioned by ingrates and half-wits, and after being yelled at by the poor, stressed-out factory owner whose life is crumbling around him, timidly go back to work as if nothing had happened.

At one point, Extract literally uses the term “working class” as a pejorative term. This happens when Joel is describing the female worker (Mila Kunis) that he wishes to seduce as “working class-looking,” to which the guy listening to him replies “So she is a slut, huh?” Just as the labor time of working men and women of the factory is exploited, the bodies of working women themselves are also coveted for exploitation by their employers. This is rationalized because working women are somehow more “promiscuous” and “dirty” than the daughters and wives of the bourgeoisie.

Final Grade
Extract is, for lack of a better turn of phrase, a steaming pile of anti-worker garbage.

Managers and other petty-bourgeois are seen as the levelheaded and decent arbiters of authority no matter what they do, and workers are seen as being inferior no matter how hard they work or what sacrifices they make. Yet the owner of the factory has the nerve to say “I’m a working man, too” toward the end of the film in order to coerce the injured employee from not suing, and after bribing the worker with the position of floor manager, gives a speech in which he places his factory on a higher rung than a “big corporation” because he “knows your names and is just right up those stairs. You won’t get that in a big corporation.” The class perspective in this movie is anything but working class, and reinforces a petty-bourgeois “middle class” fetishism that puts workers on a level below pigs and dogs.

Needless to say, we at the American Party of Labor did not enjoy this film.