Confederate History Month: The Right’s Whitewashing of a Racist Regime 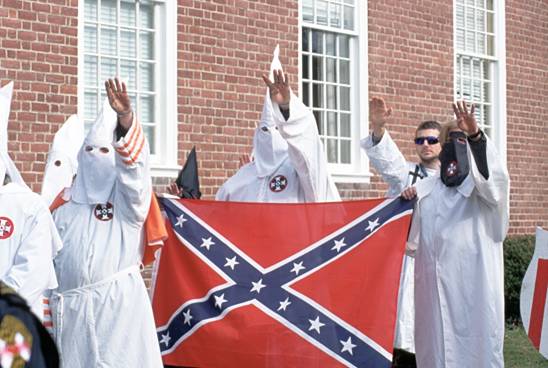 Governor Bob McDonnell of Virginia declared this April as Virginia’s “Confederate History Month.” Virginia is not the first state to practice this. The states of Alabama, Mississippi, Texas, Louisiana, Florida and Georgia all commemorate the Confederate States of America. The CSA, as Confederate Vice President Alexander H. Stephens describes, was a “new government . . . founded upon exactly the opposite idea [from that of the United States in 1776]; its foundations are laid, its corner-stone rests, upon the great truth that the Negro is not equal to the white man; that slavery subordination to the superior race is his natural and normal condition. This, our new government, is the first, in the history of the world, based upon this great physical, philosophical, and moral truth.” To many Black Americans the Confederacy is a gruesome reminder of slavery, rape, murder, humiliation and hypocrisy on an astronomical scale.

White southerners who honor their “Confederate heritage” try to separate slavery from the Confederacy, which amounts to the same as trying to separate Nazism from gas chambers. From the Ku Klux Klan’s early days in the Civil War to the reaction to the Civil Rights Movement, the Confederacy and the Confederate Flag has been used as a symbol for racism and oppression of Black people in the United States. Yet this is not a controversy. Despite the fact that both slavery and the Confederacy are viewed in a horrendous light, the Right in the South has continuously tried to whitewash history and cast the CSA as the “victim” in the Civil War, and not the millions of Black people it oppressed. It should go without saying that Neo-Confederacy is in the mainstream of Southern reactionary politics, including in the government itself, South Carolina Congressman Joe Wilson and Texas Congressman Ron Paul being two of them. Joe Wilson is a member of the Sons of Confederate Veterans, a group that calls for secession, slanders the Haitian Revolution and claims that Southern slavery was humane. Ron Paul, hero to annoying college Libertarians, is tainted with numerous racist statements of his own claiming only 5% of American Blacks had sensible politics. Ron Paul’s former chief of staff, Lew Rockwell, was a founding member of the League of the South which the Southern Poverty Law Center labels as a hate-group. Michael Hill, in an essay on the Leauge of the South, states that “[T]he Southern League supports a return to a political and social system based on kith and kin rather than an impersonal state wedded to the idea of the universal rights of man. At its core is a European population.”

The only history that should be celebrated in the South is the heroic actions of black and white abolitionists like Harriet Tubman, John Brown, Frederick Douglas and the numerous slave revolts which took place to fight against this unjust system. The only celebration should be the destruction of the Confederacy, the eradication of race-based state in the Americas, and the abolition of slavery.