In a world where people live their lives vicariously by manipulating cyborgs called “surrogates” from the comfort of their own homes, FBI agent Tom Greer (Bruce Willis) is put to the task of tracking down a killer wielding a weapon which has the capacity to both kill a surrogate and its operator, all the while unraveling a conspiracy that threatens the lives of every person who uses a surrogate.

The movie begins with The Prophet (Ving Rhames), leader of the “Human Coalition,” an organization for the abolition of surrogacy, delivering a speech over a montage depicting the evolution of the surrogate industry. The argument made throughout, by The Prophet as well as Canter (James Cromwell), the inventor of surrogacy, is that living through a machine deprives a person of their essential humanity. The main conspirator, before trying to wield a device that will kill everyone who uses a surrogate, argues to Agent Greer that he is doing this “so we can be human.” The villain, whose name will not be revealed in this review for the purpose of being spoiler free, states that these people who use surrogates are “already dead,” and further makes the claim. “You have to kill the addict to kill the addiction.”

The message here is that technology is responsible for alienating human beings from their essential humanity; that our dependence on technology has entombed us in a life of depravation. People no longer live but pretend to live. They spend their lives thinking that they are freer for their ability to use technology in the place of their own bodies, yet the reality is that humanity is trapped in their own homes, afraid to leave them because of the risk and uncertainty that comes from living one’s own life in ones own body. For comfort and convenience, people surrender what makes them human, and the result is a society that is essentially meaningless. There is a scene where Greer is pursuing a surrogate which has been high-jacked by the main antagonist, and as he is driving after them, he hits several people with his car. These people, who are not people but merely surrogates being operated by people from the comfort of their own homes, are no different than the clothing display mannequins in the clothing store he crashes into. Our technological society is therefore a lie, concealing the fact that we are really slaves to machines.

One thing that struck me during the film was the implication that most of the world’s population are using surrogates. In the introduction sequence they claim that 98% of the population are using such things. This truly is laugh-worthy. Most of the world doesn’t have access to a telephone. Most of the peoples of Africa, Asia, Latin America and the Caribbean would not be able to afford expensive robot bodies.

A Critique of Internet Society 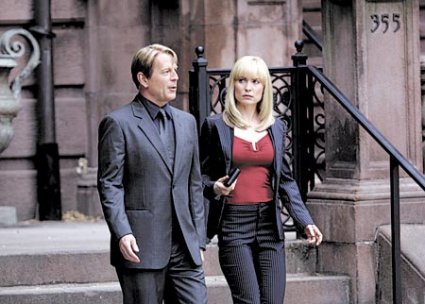 Anyone watching Surrogates who has spent any length of time interacting with others online is bound to pick up this film’s critique of internet society. One of the first events of the film involves the murder of Canter’s son, who is attacked using the anti-surrogate weapon while borrowing his father’s surrogate. He is attacked while in a back alley, kissing a beautiful blonde surrogate that he picked up at a night club. When the broken surrogates are traced back to their operators, who have had their brains liquefied as a result of the anti-surrogate weapon, their identities are revealed to be very different from those of their surrogates. The woman, it turns out, was a middle aged man pretending to be a woman. This critique of internet anonymity becomes an essential part of the plot when Greer’s partner’s surrogate (Radha Mitchell) is high-jacked by the antagonist. You can never really know who you’re dealing with on the internet, whether it is someone who isn’t honest about their true identity, and there is a risk that you could be talking to someone who has high-jacked someone else’s online accounts for their own purposes.

There was also an interesting theme which is critical of the awkwardness of communicating electronically. There are many moments where, in the middle of a conversation, a surrogate freezes while the operator takes a break to use the bathroom. There are also moments where users disconnect from their surrogate in order to express emotions that they didn’t want to express in public (such as crying, in the case of Canter upon hearing of the death of his son). This is much like communication via instant message, where a conversation consisting of relatively little dialogue can be stretched out over several hours thanks to people losing interest and doing other things. The sincerity in someone’s communication is lost when technology is the central means of communicating. Just as ones true emotions are masked by using a surrogate, they are concealed in our own online interactions, replaced by emotions and cheap jargon. Life has become a MMORPG, a game of people pretending to be something else, and technology allows people to live this insincere life.

Critiques of Beauty Standards and Consumerism

A central theme in surrogates is the theme of beauty. Surrogates are made to be flawless, a picture of what the operator aspires to be, and the result is a society of people who look like the sorts of models who grace the covers of clothing magazines. The result is that surrogates, especially when their operators have disconnected from them, look like dolls. This comes in contrast to the operators we see at home who are imperfect. Greer goes from looking like a younger and more handsome version of himself, as he operates his surrogate, to being a unshaven, balding and comparatively less attractive version of himself for the remainder of the film. Another part of the film where we see this theme of beauty in play is at the surrogate salon where his wife JJ (Rosamund Pike) works to make modifications to people’s surrogates. We see these surrogates having their faces removed and being altered to better suit the operator’s preference for their physical appearance. If this isn’t a metaphor for cosmetic surgery for the purpose of conforming to unrealistic beauty standards, I don’t know what is! To boot, this is tied directly into a critique of consumerism, being that the surrogates themselves are a commodity, and the means of attaining these unrealistic standards of beauty is by purchasing surrogates and upgrades for them. Just as people spend money online to buy clothes for customized avatars on the Playstation Network, they are spending money here on a doll that will be their avatar in real life.

Verdict: A Swing and a Miss 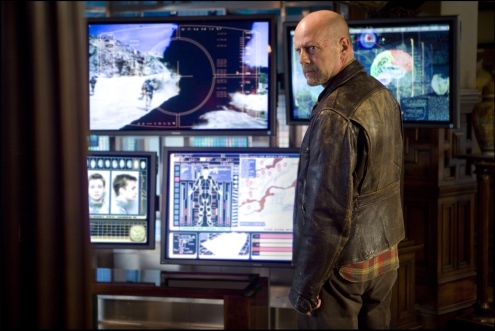 This movie has a fascinating premise, and could have done a lot more with it, yet too much emphasis was placed on the action and special effects rather than on the script, which generally consisted of weak dialogue and cliche. In addition, complaints are raised about modern society being a force for alienation, yet there is no attempt to analyze why, or offer a solution other than “smashing the machines” like the Luddites of old. There is no criticism of capitalism, which thrives by exploiting and alienating workers and ultimately drives people towards escapism via commodity fetishism and disconnecting from reality. There is only a petty-bourgeois thumbing of the nose at society, and because of the shallow nature of this message, I can’t say that the criticisms provided here are important or ground-breaking. This is typical Hollywood blockbuster fluff that tries to be edgy and unique, yet misses the point, and so I do not recommend sitting through it for any other purpose than special effects and seeing Bruce Willis wearing a blond toupee.

Like Loading...
‹ Review of “V For Vendetta” (Movie)
The Waning of Trade Unions: Labor Law and its Subversion ›