On Sept. 24th, agents of the United States Federal Bureau of Investigation (FBI) raided the homes of several anti-war activists in Minneapolis and Chicago as well as North Carolina and Michigan at approximately 8:00 am central time. These raids are being conducted as part of an FBI sting operation carried out by the “Joint Terrorism Task Force” to harass arrest and detain peace activists across the country. This has resulted in federal search warrants being issued and SWAT teams being called upon to raid civilian homes. The FBI also distributed several  subpoenas ordering the activists to testify before a federal grand jury on charges of “supporting terrorism” in October. Thus far, those raided have refused to speak to the FBI about their political views or organizing activities. The FBI is threatening to investigate them all on terrorism charges.

The most prominent victims of these investigations are Mick Kelly, a Minneapolis anti-war activist who announced his plans to protest the Democratic National Convention in 2010, and Jessica Sundin, one of the organizing leaders of the 10,000-strong 2008 march against the Republican National Convention. Both have denied being involved in any illegal activities. Raids were also carried out against Tracy Molm (Students for a Democratic Society in Minnesota) and Meredith Aby (Twin-Cities Anti-War Committee). Other names have not been disclosed. Among the activists and organizations targeted were the Twin-Cities Anti-War Committee, the Palestine Solidarity Group, Students for a Democratic Society, the Colombia Action Network and Freedom Road Socialist Organization. Many of the raided activists also helped to organize the successful anti-war protests at the Minneapolis RNC in 2008.

Supporters gathered at a press conference at 4:00 pm in front of one of the raided homes to protest and denounce the events of the morning, organized by the Anti-War Committee, Students for a Democratic Society and the Welfare Rights Committee. An article from Indymedia recalls one of the raids:

“Outside Hard Times Cafe, three unmarked black SUVs (one with an Illinois license plate) sat in the parking area as of 10am, when a lawyer observed 8 FBI agents sitting in the residence examining materials. Otherwise the scene was calm. Agents had broken in the door there at 7am Friday morning, breaking an aquarium in the process. The Federal search warrants appear to be focusing on seizing electronic devices, international travel, and allegeing “co-conspirators.”  They do not authorize arrests. The search warrant for 1823 Riverside, the residence of activist Mick Kelly, sought information “regarding ability to pay for his own travel” to Palestine and Columbia from 2000 to today.  The warrant hyped potential documents indicating any contacts/facilitation with FARC, PFLP, and Hezbollah – what it called “FTOs” or  “foreign terrorist organizations”.  It mentioned seeking information on the alleged  “facilitation of other individuals in the US to travel to Colombia, Palestine and any other foreign location in support of foreign terrorist organizations including but not limited to FARC, PFLP and Hezbollah”. An FBI spokesman Steve Warfield confirmed that six Minneapolis homes were raided this morning.

The warant also sought information on “Kelly’s travel to and from and presence in MN, and other foreign countries [sic] to which Kelly has taveleled as part of his work in FRSO [Freedom Road Socialist Organization”, as well as materials related to his finances and the finances of FRSO, and all computer and electronic devices” (1). 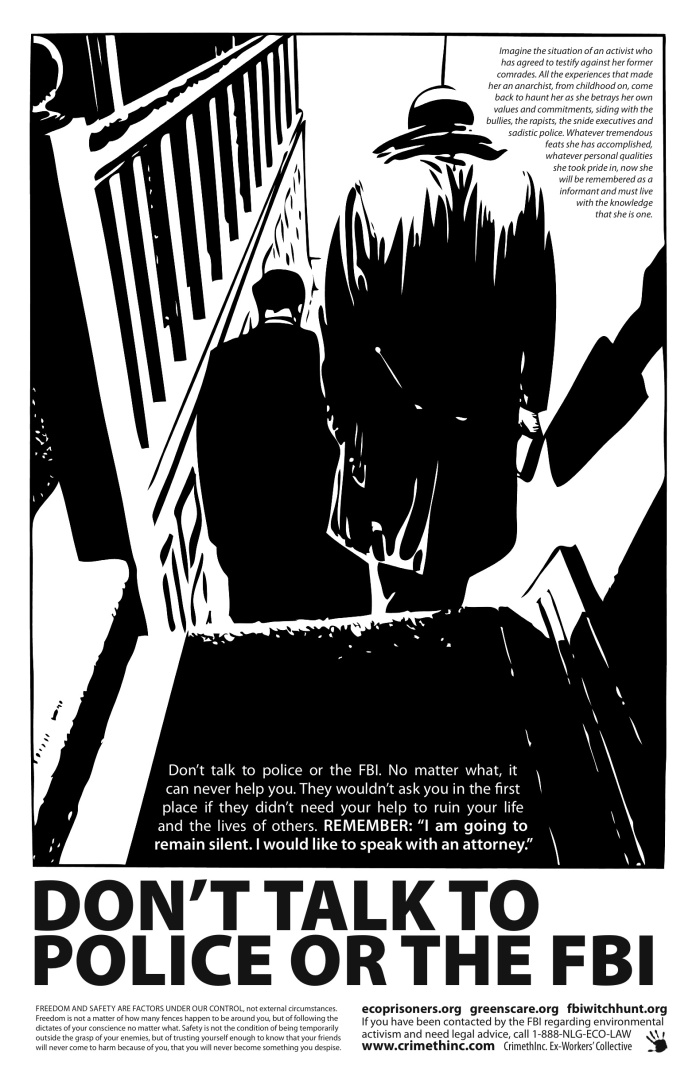 All people should condemn the US government’s crackdown on anti-war activists and the FBI’s raids and intimidation of dissenters. In these times of crisis and fierce class struggle we should work in solidarity to fight persecution by law enforcement and intelligence services in the service of the war machine in the White House. A bulletin by ANSWER contains valuable tips the APL also recommends on emulating the behavior of the activists in the face of repression:

“ANSWER encourages all anti-war activists to follow the example of the targeted activists if you are confronted by the FBI or other police agencies. It is important for all activists and organizers to know your civil rights. People have the right to remain silent and to consult with an attorney. Even if the FBI shows up at someone’s home or office with a warrant, you are not required to engage in conversation. It is better to say to FBI or other law enforcement agents, ‘Let me have your contact information and my attorney will call you.’ People will gain nothing by engaging in discussions with FBI officers” (2).

To all fellow travelers – know your Miranda Rights and read the Smith Act. The American Party of Labor stands against this injustice and encourages you to organize and attend any actions in your city to fight against government harassment and imprisonment. We should all vow to carry this struggle through to the end.

The APL recommends these books for activists:

“If An Agent Knocks” – Booklet on how to handle police encounters.