On the Ninth Anniversary of the Afghanistan War

Today, the war and military occupation in Afghanistan continues onwards for its tenth year, marking the ninth anniversary of the invasion on October 7th, 2001. The so-called “Global War on Terror” has escalated into a full-scale invasion and occupation of Afghanistan and Iraq as well as the bombing and terrorization of Somalia, Pakistan, Yemen and other countries. Since then, the financial costs of the Afghanistan War have trampled that of the Iraq War. In February 2010, the monthly cost for Afghanistan was $6.7 billion, while the Iraq War was $5.5 billion. Costs aside, let us take a look at where the Afghan War has taken the Afghan population nine years down the line.  “Operation Enduring Freedom” (OEF) has brought nothing but destruction, a military dictatorship, legalized rape and the re-opening of Afghanistan’s poppy and opium fields to fuel the global drug trade.

In addition, NATO airstrikes and ground operations have not ceased for a moment. Even pro-US Afghan President Hamid Karzai is calling on the US to withdraw. The death tolls for both the Iraq and Afghanistan Wars have independently claimed thousands of lives. Some civilian death estimates for Afghanistan say between 11,443 and 14,240 deaths have been recorded total as “direct deaths,” with 6982 since 2007. Some estimates go as high as over a million dead in Iraq alone. The recent escalation of the war in Afghanistan by the US imperialists is the beginning of President Barack Obama’s plan to send 30,000 more troops in the coming months before a supposed gradual drawdown of troops (much like the recent Iraq “drawdown” no doubt) in 2011. The CIA remains poised and ready to borrow armed bomber drones from the US military in order to expand their covert assassination campaign, which has been known to violate the borders of Pakistan in North Waziristan and commit political assassinations.

A global public opinion survey involving 47 nations conducted in 2007 found that only 2 out of the 47 countries possessed a majority that supported the continued US/NATO occupation of Afghanistan. These two were Israel (59%) and Kenya (60%) (1). More breaking news included that “The Taliban issued a statement marking the invasion anniversary, claiming 75 percent of Afghanistan was now under its control. ‘The strongholds of jihad and resistance against the invading Americans and their allies are as strong as ever,’ it said. ‘The invading Americans spent hundreds of billions of dollars in order to continue this illegitimate war, lost thousands of soldiers — with tens of thousands of them being injured — and faced heavy losses in terms of military hardware.’ The Taliban urged the U.S. and its allies to immediately leave the country” (2). A report by the Open Society Foundations, a think-tank, said that “Afghans are increasingly angry and resentful about the international presence in Afghanistan and do not believe insurgents are responsible for most attacks and civilian deaths” (2).

Just to give our readers an idea of just how bad the drug trade in Afghanistan has gotten since the US occupation, on Wednesday a “joint patrol […] seized a vehicle with 1,700 pounds (760 kilograms) of heroin, 550 pounds (250 kilograms) of hashish, 220 pounds (100 kilograms) of wet opium, five anti-personal mines, and bomb-making materials in Kandahar […]” (2).

As Afghanistan was getting ravaged with bombs, the U.S. government enlisted the help of the Northern Alliance led by warlord Rashid Dostum to do their bidding on the ground. In a U.S. orchestrated operation, the Northern Alliance captured the Taliban stronghold of Mazar-i-Sharif. Thousands of Taliban fighters were taken prisoner in the nearby town of Kunduz. Kunduz fell in November of that year, and in December, New York Times correspondent Carlotta Gall reported, “dozens…of prisoners asphyxiated in shipping containers used to transport them to [the] prison in Shibarghan, a journey that took two or three days” (3). The NA needed to transport thousands of “potentially dangerous men” and as such they were stuffed into sealed containers that often line the roads of Afghanistan and are used to transport prisoners. This figure of “dozens” comes from the prison commander who admitted that 43 had died during the journey, most from combat injuries. However, inquiry with inmates held in Shibarghan lead Gall to believe that the actual number of deaths may be much higher. 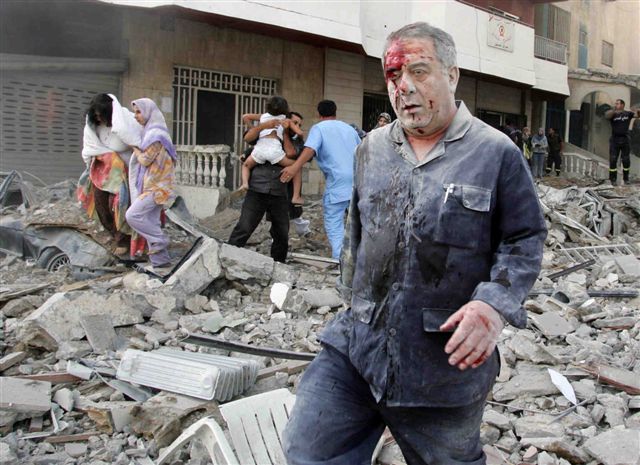 The following May, Gall offered a follow-up report, offering the news, “A tangle of abandoned clothes, half-covered in sand, lies just off the desert track. Pieces of white bone are strewn among the mess and the smell of decaying bodies drifts over the site” (4). She then went on to offer some background information on what she had discovered: The desert outside Shibarghan “hides what are suspected to be large-scale killings committed five months ago by Afghan allies of the US” (3).

As for a more recent event, rogue members of a platoon from the fifth Stryker Combat Brigade, second infantry division were charged with killing civilians for sport and for dismembering and photographing corpses. According to the army’s own charge documents, an Afghan man approached the platoon in the small village of La Mohammed Kalay. One soldier, falling back on the excuse that they were under attack, threw a fragmentary grenade and ordered others to open fire. This unprovoked attack, taking place on January 15th, was the beginning of a wide-reaching shooting spree against civilians. The subsequent investigation has pressured the belief that the military ignored warnings of the rouge soldiers and what they were doing.

One of the soldiers facing charges, Spc. Adam Winfield, wrote home to his parents after he was notified of the killings done by his fellow soldiers, “I’m not sure what to do about something that happened out here, but I need to be secretive about this” (5). He wrote this on a Facebook message to his parents, dated January 15th, 2009. About a month later, he was able to present his family with the details. Soldiers in his unit were on patrol and killed, “some innocent guy about my age, just farming” (5). He then added that those who had committed the murder suggested that he “get one of his own.” The soldier’s father, Christopher Winfield, went to contact the Army through a hotline in order to prompt an investigation. However, his efforts were all for none. Months later, two more Afghan civilians were killed.

Spc. Winfield later told his parents that he had “proof that they [the soldiers in his unit] are planning another one in the form of an AK-47 they want to drop on a guy” (6). He added that he felt a strong concern for his personal safety if he made the decision to report the killings to the authorities. “Should I do the right thing and put myself in danger for it? Or just shut up and deal with it,” adding, “There are no more good men left here. It eats away at my conscience every day” (7). Winfield had good reason to worry. Another soldier in the same unit, Pfc. Justin Stoner, who told superiors about hashish-smoking among soldiers, was savagely beaten by several members of the platoon. Staff Sgt. Gibbs and another soldier further intimidated Stoner by displaying on the floor a set of severed fingers, telling Stoner that “if I don’t want to end up like that guy…shut the hell up” (6). This led Stoner to tell investigators about the murders of the three Afghan civilians.

Spec. Jeremy N. Morlock, 22, and a member of the 5th Stryker Combat Brigade admitted to taking place in the killings, which took place in the Kandahar province between January and May 2009. He attempted to shift the blame entirely on Gibbs, claiming that he was the one that planted the idea with their unit to kill innocent Afghans. “Gibbs had pure hatred for all Afghanis and constantly referred to them as savages,” Morlock said in one statement, details of which were first reported by the Associated Press (8).

Morlock, Gibbs and three other U.S. soldiers have been charged with murder in the deaths of the three Afghan civilians. In some of the most gruesome allegations against American military personnel since the 2003 invasion of Iraq, they and other soldiers from their platoon also face charges of using hashish, dismembering and photographing corpses, and possessing human bones. Morlock’s defense attorney sought to toss out his client’s statements by arguing that he was on heavy medication at the time of his discussion with Army investigators in May of that year.