Home › International › Afghanistan › Review of “The Shock Doctrine: The Rise of Disaster Capitalism”

Review of “The Shock Doctrine: The Rise of Disaster Capitalism” 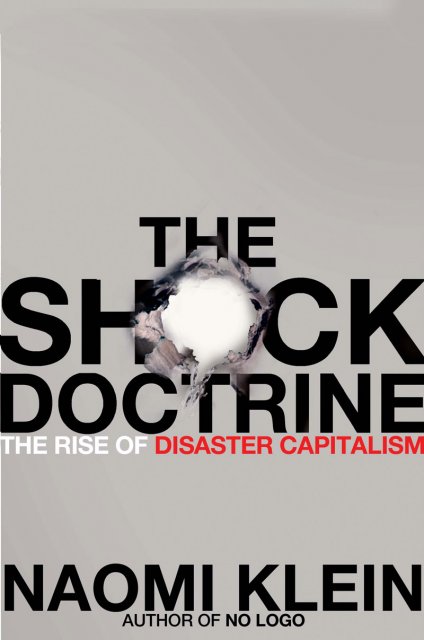 The Theory of “Shock Therapy”

Every once in a while, a book comes along that sets the liberals on fire. The Shock Doctrine: the Rise of Disaster Capitalism by Naomi Klein is one such book. This volume has been hawked by such national liberal pundits as Ed Schultz, Keith Olbermann and Rachel Maddow. There has been such a buzz over this book in the past two years that it behooves us to write a review of it. Overall, the writing style is quite friendly to those of us who are not political scientists. It is, so to speak, an easy read. The historical research that went into the book is respectable (for the most part). Naomi Klein’s title refers to the “shocking” ways in which unregulated free markets have been applied to many countries throughout the world, and how “disaster capitalism,” or capitalism that is a disaster for working people, has been put in power.

From the coup in Chile to the invasions of Iraq and Afghanistan and the “shock therapies” used in Poland, the former Soviet Union and Eastern Europe and even the US and UK, this book lays out quite completely the pattern used by the Friedmanite capitalists of the Chicago School from their rise in the 1970s to their mastery over the IMF and World Bank in the 1990s and their control of WTO and GATT today. Overall, the pattern is the same between these different occurences in different countries at different times. It is a form of imperialism, which as we know is the necessary expansion of capitalism to capture more resources and more markets. Unless capitalism constantly expands it is subject to collapse. Klein is correct about this. That said, there are severe flaws with the ideology expressed in the book.

The Friedmanite model of capitalism requires three things: social spending cuts (or even better the absence of a social support system), deregulation and extensive tax cuts for business ventures and the wealthy. In the instance of Chile and the Latin American countries (Chile, Argentina, Brazil and Bolivia) the start was a coup of the more independent-minded capitalist governments that pursued the European social-democratic style. The first to be subjected was Chile, which had elected Allende, and it was deemed prudent by the Nixon Administration to support a coup by Pinochet and to radically alter the Chilean state. According to Klein, the only way to successfully pull this off was through extreme psychological and cultural shocks to knock down the resistance of the Chilean people to these so-called reforms.

Klein mentions many of the “shocks” of the Chilean coup, such as tanks seizing government buildings, military police arrests, disappearances, murders and torture—all of which was developed by the CIA under the MKULTRA program and resulted in the creation of the “KUBARK” manual.* Pinochet, being a general who had no schooling in economics, needed economic experts. These were provided by Chicago School of Economics graduates, both Americans and Chileans. Even before the coup, they devised an economic plan called “the Brick” which called for the destruction of the Chilean social programs, massive tax cuts, deregulation and the removal of protective tariffs. The results of these political shocks, economic shocks and later shocks to individuals through torture as Klein’s “shock” metaphor goes, were economic disasters for the Chilean workers and massive profits for the capitalists in America and the Chilean bourgeoisie.

The “Shock Doctrine” at Home

Next in line were Argentina, Brazil and Bolivia. Over the course of time, these methods were refined and redefined for use in so-called democratic countries like the US and UK. According to Klein, “Thatcher-ism,” as it was called in the UK, was pulled off by starting a war with Argentina over an archipelago in the South Atlantic called the Falkland Islands. Thatcher was able to use the war to whip up patriotic sentiment to enable her to bust unions and radically revise the social structure of the UK in the name of an “Ownership Society.” People thought that was a phrase coined by George W. Bush—the former President isn’t that smart, quite frankly.

In the United States, high rates of interest imposed by the Federal Reserve (also known as the Fed) were putting economic pressure on America. It was during this time that Ronald Reagan began his campaign of union-busting, starting with the air traffic controllers.

During the 1980s expansion of the Freidmanite “shock treatments” in the developing world were imposed by the IMF and the World Bank. They demanded privatization, social austerity and deregulation as conditions to give loans, which were usually take out to pay debt incurred from previous loans for economic development. The end result of course, was a disaster for the working people of Africa and Asia.

In the 1990s, the “shock doctrine” was expanded to Eastern Europe in the wake of the collapse of the Warsaw Pact states. The prime examples—Poland and Russia—were exposed to so-called shock therapy almost immediately. In 1990, the Solidarity group were used by the West to call for privatization, deregulation and asset sales from the Polish state-operated infrastructure. Naomi Klein does her best to whitewash Solidarity, using frivolously high numbers for their membership and neglecting to mention their ties to the West, instead portraying them as victims. Russia followed much the same pattern as Poland, although at an accelerated rate. This netted huge profits for Western capitalists and worsening conditions for the Russian and Polish workers.

Friedman-ism also worked its way into the People’s Republic of China, which was already undergoing the construction of a capitalist society under Deng Xiaoping. Deng’s policies of course had the result of growing inequity in China, and also an increase in unemployment, as capitalism, in order to maximize profit, requires the presence of surplus labor to drive down wages. There were also severe cuts to the social programs in the PRC at the time.

This leads us to Klein’s next subject – the use of pressures for deregulation by the West to cause capital flight in the so-called “Asian Tigers,” namely South Korea, Taiwan, Thailand and Malaysia. These societies had extremely high tariffs, huge public infrastructure in state-capitalist companies as well as in social goods like education. By pushing for the deregulation of their capital controls, the Asia Crises was engineered by the WTO and the IMF.

All of this leads to the final frontier for capitalist penetration, namely, the economies of the Middle East and the People’s Democratic Republic of Korea. In the Middle East these states, usually with large oil reserves, did not have loans to pay off and were mistrustful of foreign influence. To the superpowers, the only solution was invasion and occupation by an outside force. What better outside force than America, which spends more on its military than anyone else? There was only one problem—the American people did not want to start a war. In short, a “shock” to the system in the United States was necessary and the bourgeoisie was more than willing to allow the plans of Osama Bin Laden to go through, since it would open up opportunities for the military-industrial complex and the creation of a new market – “Homeland Security Solutions.” Needless to say, Bin Laden was more than willing to oblige, and the outsourcing of everything from cooking and military construction to companies like Halliburton went through unabated.

As we mentioned, there are deep flaws to this book. Naomi Klein seems to believe that a form of capitalism can be devised which is not a “disaster” for working people when capitalism by its very nature is contradictory to the interests of all those who lack capital. Throughout the book, the author repeatedly hammers home her view that Keynesian capitalist economics is some how better for working people. Such a view is patently untrue. Regulated capitalism, which is the basis of Keynesian economics, as we know, only places rules and regulations on a system imposed by and supported by the very people who have the means to destroy, subvert and work against those very regulations. Keynesian economics is at best a temporary solution to a crisis in capitalism which will be replaced eventually by the most abusive forms of capitalism precisely when the capitalists think they can get away with it.

Indeed, despite the bourgeois liberal-leaning of Naomi Klein, and despite her whitewashing of social democracy and Keynesian economics, she has managed to show that that the current War on Terror is nothing more than the latest manifestation of imperialism, which must ultimately culminate in one of two outcomes: capitalist dictatorship or socialism.

*Remember this folks, because it will become apparent by the time of War on Terror that the torture methods and rendition methods used in Guantanamo and Abu Ghraib were not just some soldiers making errors but rather methods developed at the highest levels of the intelligence services of the United States.