Home › International › Afghanistan › Review of “Severe Clear (This is War)”

Review of “Severe Clear (This is War)” 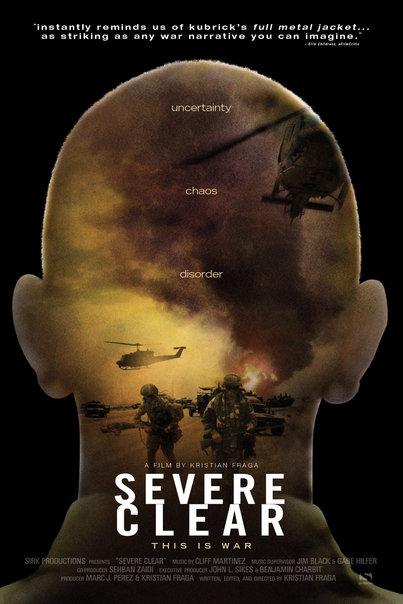 Severe Clear, or This is War, is a documentary made from footage shot by First Lieutenant Mike Scotti on his own personal camera as he is deployed in Iraq as part of the invasion force sent in to capture the city of Baghdad. The story follows him and his platoon from Lieutenant Scotti’s living quarters to his being sent back to the United States after the capture and occupation of the Iraqi capital. The documentary contains scenes from the every day life of the soldiers as they advance through the country and of frenetic combat during the march to Baghdad and in the capture of the city itself.

In the daily lives of the soldiers, beginning with them being ferried to the Middle East via warship, the troops themselves appear to act in ways similar to adolescent boys. They swear, rough-house, drink, tell raunchy stories and otherwise behave in a manner that reminds the viewer of something between a high school locker room and a college frathouse. One scene has a soldier wearing a chain around his neck as a leash, being led around by another soldier, acting as if he were a rabid dog. Other scenes show the soldiers engaging in actions that can only be described as homoerotic. This happens while the soldiers jest in a homophobic manner, saying “you guys are so gay.”

As he narrates such scenes, Lieutenant Scotti argues that the press does “PR work” rather than actually capturing the “real life” of soldiers. Ironically, however, the result of Scotti’s filming and narration does its own “PR work” by re-articulating the age-old propaganda paradigm as a country’s soldiers being “their boys.”

When one is encouraged to view their military as consisting of rough-housing and juvenile man-children, who are also patriotic and selfless soldiers whose sole aim is protecting their parents and loved ones from dangers abroad, one is compelled to support their efforts no matter what situation they are in. From the laughing bugle boys and playful soldiers in Triumph of the Will to the marines in Severe Clear, pro-imperialist propaganda efforts have tried to emphasize “boyhood” as a virtue of their armed forces. This serves to put soldiers on a level above criticism, being that to criticize them is to criticize the children of a nation who only have their nation’s best interests at heart.

A frequently repeated line of commentary from Scotti’s narration is that the soldier’s purpose is to kill other soldiers. “Our job is to kill — pure and simple,” he says, and in his commentary he asserts that the hardest part about being a soldier isn’t actual combat, but the waiting in between bouts of fighting. As Scotti’s artillery unit is called in to launch ordinance at an enemy position for the first time, soldiers make jovial comments such as “it’s like training with live targets!” and “this is the coolest fucking thing ever!” As well, when Scotti encounters the dead bodies left behind from the efforts of him and his fellow marines, he claims that “all I see is a job well done.”

While Scotti and his fellows lament over the occasional civilian who stumbles into their line of fire, the attitude towards those perceived to be the “enemy” can be summed up in the phrase “fuck ‘em,” which is frequently used in reference to the butchered corpses and flaming vehicles that the marines leave in their wake.

At the same time, even when the presence of WMDs is uncertain and the whole purpose for the occupation is in doubt, Scotti insists that “it doesn’t matter.” Even when the capture and occupation of Baghdad has the Iraqi people resisting US forces, Scotti narrates “Do they really want us here? Do they really want democracy? It doesn’t matter.” He then goes on to harp more on about a soldier’s “duty” and how they have “a job to do.” This was a particularly revealing quote in that it wipes away all of the excuses and pretenses surrounding their activity.

US imperialism was never bringing the Iraqi people “freedom” or “democracy” in the first place and, as such, the soldier’s actions are not bogged down by this pretense. Even though “revenge” is a major theme and motivation early on, with Scotti carrying around a picture of a victim of the September 11th World Trade Center attacks, the notion that he feels it “doesn’t matter” whether there was any reason to invade Iraq or not. They were there to kill, to carry out the orders they were given faithfully and to enjoy combat.

The Soldier is Never Wrong

One important aspect of this documentary is that it seeks to place any conceivable blame on those other than the soldiers. The idea is that a soldier is merely “doing his job” and “looking out for his buddies.” If there is any wrong-doing in the chaos of battle, the blame can be left at the doorstep of “politicians.” When civilians are killed in the crossfire, including one particularly gruesome account of a father and his young daughter being blown apart by 50 caliber rounds when they ran a checkpoint, Scotti provides the excuse that “we weren’t trained to be police.”

Such excuses and the assertion that U.S. soldiers are only “doing their job the best they know how” speaks to a Nuremberg-esque dodging of any fault in carrying out the orders that they are given. To Scotti, soldiers are above guilt or blame because they don’t make the larger decisions in the war effort. It is almost as if this rhetoric would seem to dehumanize the soldiers themselves in the same way they must dehumanize the enemy, in that they merely see themselves as tools for the purposes of carrying out the orders they are given.

This situation translates into Scotti’s biggest criticisms revolving around the inadequacy of the supplies soldiers are given, including the lack of body-armor and other necessities that would help facilitate the carrying out of their mission. There is no real criticism of the war effort itself, of the geopolitics of an imperialist invasion of a country with no involvement in the 9/11 attacks and certainly no criticism whatsoever of his fellow soldiers. Soldiers are never wrong, only their commanding officers and the politicians are culpable.

This film is a propaganda film to its very core. It does not try to make its point by providing an idealized image of combat; instead it tries to espouse sympathy for invading forces by showing a “gritty” first-person perspective that shows soldiers photographing corpses, vomiting, drinking, cursing and any number of things that would seem counter to the fetishized “citizen soldier” perception that the military hawks in their recruitment efforts. These boyish, patriotic ruffians are to represent a “real face” of war that, while not being idealistic, does have an appeal. Military service is made out to be a unique, exotic experience that, while posing challenges, provides young men with brotherly bonds and an unparalleled adrenaline rush.

In addition, there is a disturbing “reality show” quality to this documentary. The footage is genuine, capturing scenes of both the mundane and of camera-jolting combat, yet the circumstances of the filming and editing of this documentary ensure that a good deal of the experience is lost. For one, the knowledge that they are being filmed by one of their fellow soldiers has a bearing on how a solder behaves. For two, this footage that inevitably contained then-classified information about the war effort would have had to be handled by military authority at some point.

Would any of these soldiers, say, utter a racial epitaph in reference to his enemy if he knew this footage may end up being made public? Would any number of compromising actions be allowed to be recorded in the first place and, if they were, what are the chances they wouldn’t be edited out? For those who have seen the testimonies at the Winter Soldier Investigation of 2008 it would seem that a good deal of the sort of things that veterans have reported, such as casual racism and trigger-happy attitudes towards civilians, do not rear their head in this documentary. Is that because they were edited out, were concealed under the pressure of a camera lens, or was it the case that none of these things happened among this particular group of soldiers? Many questions arise to the surface which leave the credibility of this kind of documentary in question as well.

This film isn’t particularly enlightening, entertaining or useful. It demonstrates a propaganda effort that, while operating under the pretense of being “real” only uses its gritty content to reinforce the “support the troops” rhetoric. There is no concrete criticism provided for the invasion, occupation and violence that has been committed against the Iraqi people and no criticism for the soldiers themselves who volunteered to invade someone else’s country and kill their people. The most this film does is speak in retrospect about the regretability of the Iraq War, yet never ceases to drone on about “honor” and “duty” as if these words could wash away the blood of imperialist war from the hands of those made to be its perpetrators. The story of the soldiers themselves, their triumphs and hardships in the context of this invasion and occupation, is prioritized over the story of the Iraqi people, which makes this documentary all too typical.