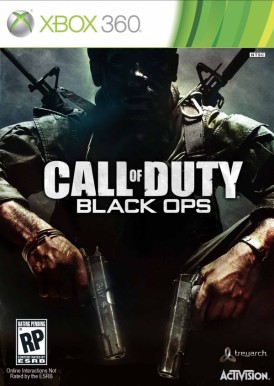 Call of Duty: Black Ops (2010) is yet another first-person shooter fetishizing imperialist war and allowing children to be their own one-man death-squads in a virtual world. America’s youth will be tossing grenades, firing automatic weapons, slitting throats and even occasionally committing torture on another battlefield waged across the living rooms of America and, when they tire of this, will be embarking on a cheesy add-on quest to defend the White House from hordes of zombies with John F. Kennedy and Richard Nixon as their companions.

With a single-player campaign mode that rips off more Vietnam War films than one can count (with notable references to Apocalypse Now!, The Deer Hunter and even themes from The Manchurian Candidate) and a frenetic multiplayer mode that has players killing one another for money to be spent on in-game weapons-upgrades, Black Ops has everything that adolescent American wants. Yet, while this game will satiate this boyish bloodlust for a few weeks, this will inevitably be remembered as merely “another Call of Duty game.” The significance of this review is not to analyze necessarily what this game is, but what it represents in terms of capitalism’s fetishization of violence and the implications of this fetish in our understanding of American imperialism.

Call of Duty: From World War to Whatever Sells

The Call of Duty series wasn’t always the degenerate cliché of online butchery combined with a lame excuse of a story trying desperately to hold itself together that it is now. Rather, it had its beginnings as a World War II shooter that drew on historical accounts, interviews of veterans and a more-or-less earnest attempt to create an immersive WWII experience. To its credit, Call of Duty was one of the first shooters of this kind to allow the player to play as a Soviet soldier fighting against the Nazis on the Eastern Front and, while the first game was bogged down in the Enemy at the Gates portrayal of the Red Army being disorganized and having as much to fear from their own officers as the enemy they were fighting, later installments were less chauvinist in their portrayal of the Soviet resistance to fascism. Call of Duty: World At War even allowed the player to play the part of a Soviet soldier whose journey takes him from the victory at Stalingrad to the capturing of the Reichstag.

The franchise began to deviate away from its focus on WWII with the release of Call of Duty Modern Warfare, which sought to apply Call of Duty 2‘s gameplay to a fictional contemporary war between the US and Russia, with a side campaign in the middle east. Here the emphasis was less on story and more on creating a gameplay experience that was more easily adapted to Call of Duty’s successful online mode. Rather than having players fighting one another online using WWII era weapons and being dressed either as Allies or Nazis, they would now be able to do battle with modern weapons complete with scopes, laser sights, under-the-barrel grenade launchers and being outfitted either as Marine Force Recon, the British SAS or a Russian Spetznaz instead.

The result was that Modern Warfare was wildly successful, leading to its own independent sequel, Modern Warfare 2. With the overarching plot having been resolved in those games, the makers of Call of Duty tried to get the same utility of having modern weapons for their online gameplay while not retelling the same stories they had been thus far. Their solution came in the form of Call of Duty: Black Ops, combining a “cowboys and Indians” Cold War narrative with gratuitous violence and action-movie plagiarism.

The “plot” of Black Ops’ single-player campaign, revolving around the Soviet Union plotting to release chemical weapons against the United States, has the player doing imperialism’s dirty work, from attempting to assassinate Fidel Castro during the Bay of Pigs to participating in the Tet offensive and slaughtering hordes of Cuban, Russian and Vietnamese along the way. As well, every effort is made to make the Cubans, Russians and Vietnamese appear to be savage and brutal. At one point the character must escape from a labor camp in the USSR and is forced to play Russian Roulette while being beaten and shouted at.

The attempt to tap into latent American anti-communism is obvious, resulting in characters talking about how they need to stop “the communists” as if they are a collective horde of unwashed barbarians beating at the doors of American empire (all while ignoring the United State’s role all throughout the Cold War). Anyone who makes any effort to understand the geopolitics of the Cold War era would find this national-chauvinist perception both typical and laughable, yet it is obvious that the Black Ops production team wasn’t looking for the sort of historical accuracy they sought out in earlier titles. Rather, the “enemy” simply makes for a convenient adversary to be slaughtered in droves. Some on the left have focused their criticism chiefly on the anti-communism of Black Ops, yet the more important message of this game is less specifically anti-communist than pro-imperialist.

One Irony Worth Noting

There are many inconsistencies, ironies and other aspects of this game which would make the class-conscious player grimace, laugh out loud or otherwise be incapable of taking the game seriously. One such irony is the focus of this games plot around a former Nazi scientist who is working with the Soviets to release chemical weapons against American cities. This is ironic, being that the greatest ally to former Nazis after the war was the United States, who collaborated with former members of the Third Reich to construct think tanks for the purposes of undermining the Soviet Union in the early Cold War.

One characteristic of Call of Duty’s degeneration has been an increase in the brutality with which the character is made to kill their enemies. For instance, the first games had the option of hitting one’s opponents with the butt of their rifle or pistol if the enemy got too close. In Modern Warfare and other later installments the rifle butt was replaced with a combat knife for slashing the enemy. Additionally, Call of Duty Modern Warfare 2 and Black Ops have an increase in “special” melee kills in which certain opponents can be killed in a non-standard melee attack. These “special” kills are often excessively brutal, involving sawing through an enemy’s neck with a knife or even hacking into their spine with a hatchet later on. If one combines this with an increase in the power of weapons to dismember enemies and burn opponents alive while they writhe and scream, the experience becomes a visceral orgy of blood and death on par with the Postal games.

As if this weren’t enough, there is also a part of the game wherein the player must torture a man by inserting glass into their mouth and punching them in the jaw until they surrender the desired information. While this scene isn’t very prolonged, the idea that this would make it into a game released after the United States’ role in directly torturing detainees (as well as outsourcing torture to private contractors and rightist groups) has become public knowledge demonstrates an extremely reactionary sentiment towards the use of sadistic measures for advancing the cause of imperialism. The idea that adolescent children, who represent the chief demographic for games like this one, would have first-hand experience within the virtual realm of committing acts of torture in the name of imperialism is alarming to say the least.

The Murder behind the Mundane

The most alarming aspect of Black Ops’ brutality is that it demonstrates just how desensitized America’s youth are to such violence. Typical first-person shooters have become mundane, necessitating higher levels of violence, gore and brutality to keep adolescents entertained. To keep hawking their wares, game makers need to take it to the next level because they have exceeded in numbing their consumers to the reality of war through repetition. To merely kill within the virtual world is not enough; one needs to be able to break their enemies apart into little pieces and watch with sadistic glee as armies become limp, bloody piles at their feet.

The child develops the perfect mentality for a soldier fighting imperialism’s battles, able to slaughter men, women and children without a second thought for the humanity of those they destroy. It’s no wonder that games have consciously been used as recruitment tools by the United States military, or that the CIA itself has been responsible for contributing funding and expertise in games that involve the enemies of US hegemony.

In the United States, there is often a glaring double-standard with how violent media is perceived. Whenever a school shooting or other tragedy involving youth violence in suburbia occurs, the focus immediately turns to the music they listen to or the video games they play. However, when American soldiers open fire on civilians from a helicopter and shred journalists with 50 caliber rounds, no one stops to consider how violent media may have brought them to where they are. What could make it so that a soldier can murder men, women and children without batting an eye? What force, what socialization, can work to desensitize the agents of imperialism to the atrocities they visit on other human beings?

The answer is that capitalist media, from music to film, from its documentation of its history to the video games that end up on store shelves, seeks to fetishize violence and dull the senses of its consumers to the horrors of imperialist war. The same efforts are undertaken whenever an empire seeks to undertake wars for the purposes of expanding their dominion. Call of Duty: Black Ops is an exemplary example of such media.