Who’s Killing the Journalists of Honduras? 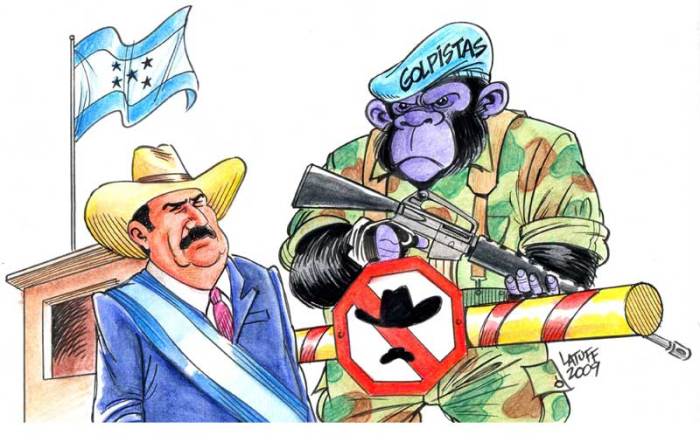 Editor’s Note: June 28, 2011 is the two-year anniversary of the coup in Honduras.

The small town of San Marco, near Honduras’ western border with El Salvador and Guatemala, has no distinguishing factors that set it apart from the other tiny villages and hamlets that dot the rural region of Ocotepeque. Its dusty streets and pretty white church give off an air of sleepy, country tranquility. But to journalist José Alemán, in late March of 2010, the town’s streets were anything but idyllic as he tried to evade gunmen sent to kill him.

It was Friday March 26, 2010, around six a.m., when Alemán left the room he had rented in the town. While riding his bike, a blue automobile appeared and attempted to cut him off. Alemán skirted his way by the truck and dodged uneasily down another street, only to have the automobile reappear and edge closer to him. Spinning his bike around, Alemán fled from the scene to the relative safety of the main park in San Marco Ocotepeque where he was to meet a friend for breakfast.

Throwing his bike in the bed of his friend’s truck, the two headed out for breakfast. While at a nearby gas station another of Alemán’s friends showed up with some news.

“They’re looking for you,” said the friend.

“Some men, they’re looking for you to kill you.”

Still shocked by the news, only minutes later Alemán received a call from a neighbor informing her that the men in the blue vehicle had stopped by his room, looking for him and saying that they were going to catch “this dog.”

“I never believed that this was true because I’ve lived here for 10 years and have never had a problem,” Alemán told The Latin America News Dispatch. Fearing for his life, Alemán headed to the local police station, but after hours of waiting without any news, he left for the relative safety of a hotel room nearby.

The following day, against advisement from his friends, Alemán headed to work at the Radio América studios. Shortly after reporting on a shootout between police and a group of unidentified assailants, the station’s phone rang. Picking up, he heard a mocking voice say “keep talking, keep talking.”

That Sunday, while the devout Christian Alemán was out, gunmen entered his home, ransacked the place and peppered it with bullets. Hearing the news, Alemán quickly packed up and fled into hiding. “Thank God I’m a Christian and it wasn’t His will that I die in my room that day,” he added.

Alemán was fortunate to escape the attempt on his life, given that he works as a journalist in Honduras. Since 2008, ten journalists have been murdered in the country and many more wounded, including the March 2011 attack on radio station director Franklin Meléndez. Honduras, which was labeled by Reporter’s Without Borders as the most dangerous country in the world for journalists in 2010, has also seen the killing of 60 lawyers, 155 women, and 59 gays, lesbians or transgender people since 2008, giving the country the ominous title of holding the highest murder rate in the Western Hemisphere, according to The Miami Herald. 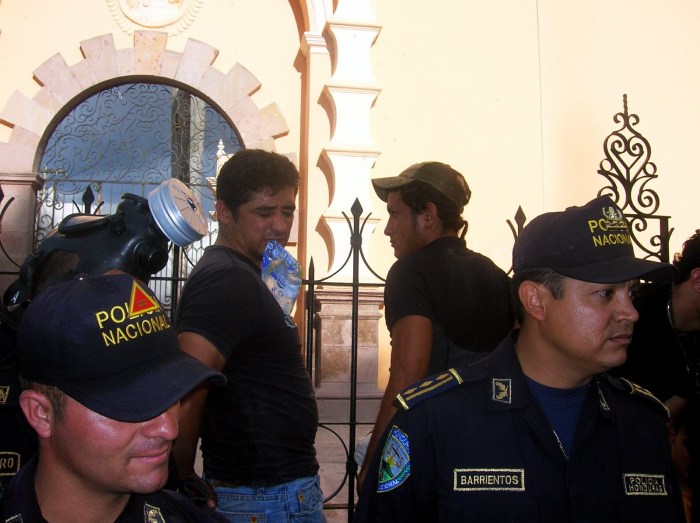 The murders began on the evening of March 3, 2010 when Joseph Ochoa, a journalist for the Canal 51 TV station, was killed in Tegucigalpa during an attack allegedly aimed at fellow journalist Karol Cabrera. On March 11, David Meza Montesinos, a radio journalist who reported receiving threats for a story on drug trafficking, was shot dead by gunmen in an ambush close to his home in the Atlantic coast city of La Ceiba. Three days later Nahúm Palacios, news editor of Televisora de-Aguán-Canal 5, was shot in his car in Tocoa, Honduras. Then on March 26, 2010 Bayardo Mairena and Manuel Juárez, both radio journalists, had their car shot up and then gunmen “finished them off with shots fired at close-range,” according to Reporters Without Borders. 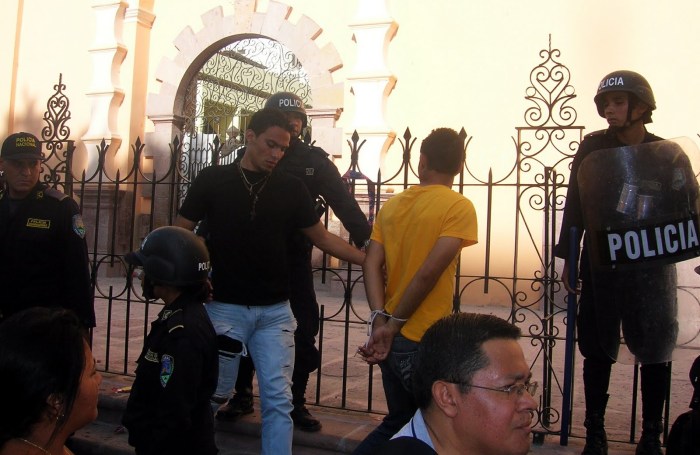 The case of Franklin Meléndez highlights that these attacks on journalists are not isolated incidents and have carried over into 2011. Along with Meléndez’s confrontation, five journalists in March were attacked by police officers while covering protests in the country’s on-going teachers strike. “Honduras is a very dangerous country for journalists right now,” said Ricardo Trotti of the Inter American Press Association (IAPA).

These murders and attacks have shocked and dismayed the journalism community, as Honduras battles to be the focal point of violence in a region of the world normally dominated by bad news from Mexico. “This unprecedented level of violence against the Honduran media has obviously created fear and unease,” said Joel Simon, the executive director of the Committee to Protect Journalists, in a telephone interview. “The murders of five reporters [last March] has inevitably caused widespread self-censorship, and prevented local journalists from reporting on sensitive information, such as crime, local corruption and national security.” 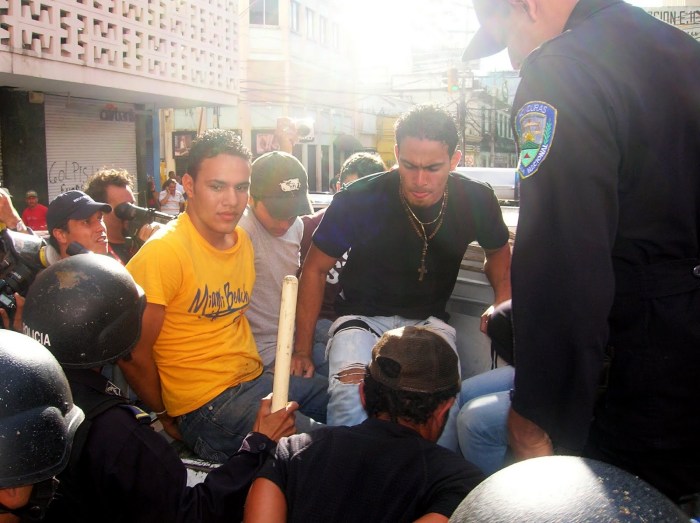 Self-censorship, due to fear of retaliation from the Honduran government or drug-traffickers, has become a major issue within the Honduran journalism community. “Any murder has the effect of intimidating the press corps and causing some journalists to pull their punches and not report what they see as the truth,” Wilkinson said. “This is disastrous for society, which ends up being ill-informed. In a way, not knowing what is really behind the killings ends up creating a multitude of possibilities and a multitude of reasons for journalists to be afraid.”

“In Honduras, it’s a crime to tell people the truth,” Alemán said, adding that when journalists report on certain issues such as drugs or corruption, editors will tell them to work on something else so they don’t draw attention to the press.

Aleman’s manager at the El Tiempo newspaper, Rubén Escobar, agreed that self-censorship is a fact of life in Honduran journalism. Escobar blamed fear of drug traffickers operating in the country for much of the self-censoring. “There are some media outlets that have stopped covering the actions of the drug-traffickers,” he said. “Self-censorship has begun to become widespread.”

Even the President of the Honduran Journalism Association asked reporters to be careful with the information and quotes they are given, according to Escobar. “This is equivalent to self-censorship,” he added.

While many blame drug-trafficking organizations that use Honduras as a stopover point between South America and Mexico for the spike in violence against media workers, others point a finger at the Honduran government and their crackdown on opposition journalists after the June 2009 coup. “Are the Honduran government’s promises to the U.N. and O.A.S. to improve the situation of the media being used as a smokescreen for targeted attacks on outspoken or opposition media?” Reporters Without Borders said. “We have every reason to suspect this, given the latest events and the total absence of protection for the most exposed and vulnerable media.”

The coup took place on the morning of June 28, 2009 when about 100 soldiers stormed the presidential palace in Tegucigalpa, forcibly removed then-President Manuel Zelaya from the premises and flying him to San José, Costa Rica. Citing a plot by Zelaya to eliminate presidential term limits and create a socialist state in the vein of Venezuela’s Hugo Chávez, the National Congress later that day voted to remove Zelaya from office and swore in Speaker of Congress Roberto Micheletti as president.

In the next few months, there were mass protests and violence between demonstrators and police. Many countries, including the United States, refused to recognize the interim government and the United Nations called for Zelaya’s reinstatement. During the turmoil, Zelaya snuck back into Honduras in September and holed himself up in the Brazilian Embassy. Under this atmosphere, Honduras held elections on November 29, 2009. Porfirio Lobo, of the conservative Partido Nacional, won the election and was installed as president two months later on January 27, 2010. That same day, Zelaya flew into exile to the Dominican Republic, after Lobo and Dominican President Leonel Fernández worked out a deal to ensure Zelaya’s safe passage out of Honduras. 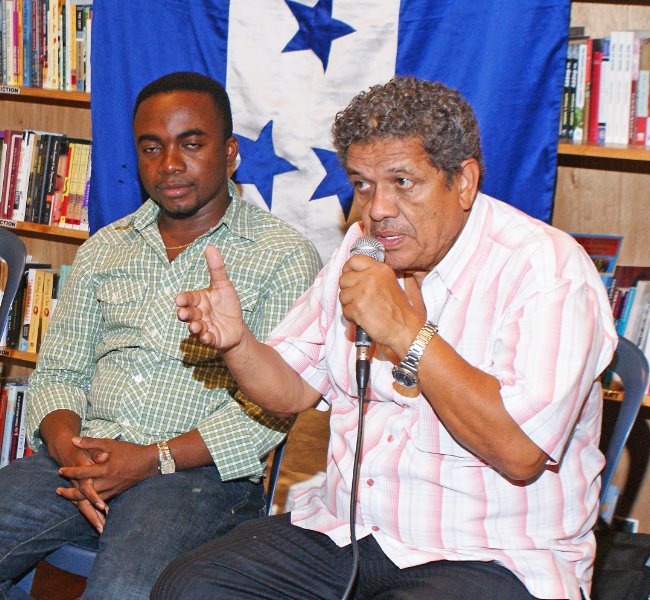 President Lobo is in a difficult position when it comes to the violence against journalists, as he is under constant watch from the coup’s military leaders to rule the way that they see fit. If he relaxes his tough stance on Zelaya supporters he runs the risk of being ousted himself, said Adrienne Pine, a professor at American University and Senior Research Associate at the Council on Hemispheric Affairs. “There’s nothing Lobo can do, even he wanted to,” she added. “It’s horrifying,” she added.

Some of the reporters killed were outspoken critics of the post-coup government, leading some to speculate that the Honduran government is solely responsible for the murders of these journalists. “Honduras is unique. In other parts of Latin America where violence against the press is endemic – Mexico, for example –it’s tied to drug trafficking. In Honduras, at least as far as CPJ can determine, the violence against the press appears to have a political dimension,” Simon said. “That’s an extremely alarming development for the entire region.”

“Of the ten journalists killed, seven were known members of the resistance,” said Gerardo Torres of Honduras’ National Front of Popular Resistance (FNRP, in Spanish). “If this were any other country, everybody would hear about this. When they kill ten journalists in Honduras, nobody knows.”

Torres, an outspoken critic of the coup and the current Lobo government, said that all these murders have gone unprosecuted and that while the Honduran government blames drug-traffickers and common criminals, the government itself is committing these murders.

If the government does not tacitly support the drug traffickers, they at least let them operate freely due to bribes and corruption and might hire them out to do the government’s dirty work. The parties in power are subcontracting the killings of journalists and dissidents out to gang members or even private security agencies that have links to paramilitary groups, Pine added. 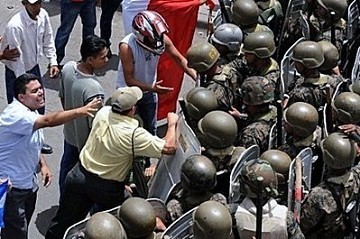 Others, such as the IAPA, don’t believe that the government is so entrenched with drug traffickers and see the problem mainly resulting from reporting on the drug trade. Mexico, in the midst of President Felipe Calderón’s drug war, is a hotbed of violence toward media workers and some fear that the violence has spread into Central America, which is a key region in the drug smuggling routes from South America to Mexico.

With Mexican cartels now holding sway in much of the region, they can recruit from local criminal groups to help with the shipment of drugs as well as form groups to carry out murders and kidnappings of rivals and critics.

“As Mexico and Colombia continue to apply pressure on drug traffickers, the countries of Central America are increasingly targeted for trafficking of cocaine and other drugs primarily destined for the United States,” U.S. President Barack Obama said in a statement on the State Department website.

Whether it’s organized crime, the government, or a mix of both, what cannot be debated is that these murders have struck fear into the hearts of Honduran journalists and cause them to censor much of their work. Will Honduras become like Mexico, where as The New York Times reported, many journalists have stopped covering drug murders and shootouts because they fear retribution from the cartels?

“It’s a climate of fear,” Aleman said. “You can’t trust anyone, only God, because in the end you’re alone.”