Analysis of the Tea Party Movement

What is the Tea Party? Who are they? Who funds them? What are their goals?

The Tea Party Movement first began on January 24, 2009. It was launched by Trevor Leach, chairman of the organization “Young Americans for Liberty” in New York State. The alleged cause for this protest was to challenge “obesity taxes” and “out of control spending,” with many of those attending donned in Native American headdresses, a throwback to the original Boston Tea Party.

The original Boston Tea Party was a rebellion against the monopoly control of the East India Trading Company on all tea imports. Despite bearing no resemblance to the original tea party in form or content, the modern day Tea Partiers consider themselves “patriots.”

Despite the first Tea Party protest being held in January 2009, the Tea Party itself credits conservative blogger Keli Carender with organizing the first “official” protest on February 16, 2009, one day before President Obama signed the stimulus bill into effect (although they admit that the Tea Party label was not used).

This protest took the form of what she called a “Porkulus Protest,” citing the conservative notion that the bill’s Keynesian economic stimulus was somehow a turn towards socialism. Carender also contacted conservative author and Fox News contributor Michelle Malkin and asked her to publicize the rally on her blog. Carender then held a second protest on February 27, 2009, reporting “We more than doubled our attendance at this one.” As reported by The Huffington Post, a Facebook page was developed on February 20 calling for Tea Party protests across the country (1). Soon, the “Nationwide Chicago Tea Party” protest was coordinated across over 40 different cities for February 27, 2009, thus establishing the first national modern Tea Party protest.

According to a New York Times article published on April 10, 2010, the results of a membership and demographics poll showed that:

“The 18 percent of Americans who identify themselves as Tea Party supporters tend to be Republican, white, male, married and older than 45. They hold more conservative views on a range of issues than Republicans generally. They are also more likely to describe themselves as ‘very conservative’ and President Obama as ‘very liberal'” (2).

Of course, the article cited equates these demographics with being “more educated” than the average American, signaling the elitist attitude not only of New York Times editors and Tea Party supporters Kate Zernikef and Megan Thee-Brenan, but also of the Tea Party itself.

The Bloomberg National Poll of adults 18 and over showed that 40% of Tea Party supporters are 55 or older, compared with 32 percent of all poll respondents; 79% are white, 61% are men and 44% identify as “born-again” Christians (3).

Despite the Tea Party’s claims of being a “centrist, race and class neutral” movement, allegations of racism have been plenty ever since the founding of the organization. Representative John Lewis was taunted at least 15 times by the Tea Party, who cried “nigger” repeatedly at him. This was confirmed by spokeswoman Brenda Jones and Democratic representative Andre Carson, who were walking with Lewis at that time. “It was like going into the time machine with John Lewis,” said Carson, a former police officer. “He said it reminded him of another time.”

Another Congressional Black Caucus leader, Rep. Emanuel Cleaver, was spat upon by protesters while walking to the Capitol to cast a vote. Although the culprit was arrested, Cleaver declined to press charges. There were also reports that Democratic Representative Barney Frank was explicitly called a “faggot.” In response, Frank stated, “It’s a mob mentality that doesn’t work politically.” This outcry of racist and homophobic slurs towards Representatives Lewis and Frank is simply inexcusable, indefensible and a strong signal of the underlying motives behind this supposedly “pro-freedom” movement.

Some may claim that the above instances do not represent the Tea Party as a whole. However, it should be noted that the movement is notorious for attracting white supremacists. For example, James von Brunn, the white supremacist who killed a Holocaust Museum guard last year, posted on Tea Party Express website. Another of these instances would concern Billy Joe Roper, a member of the ResistNet Tea Party who also happens to be the founder of the overtly racist White Revolution organization, indulging in “Nazi glamorization” with his eulogy for William Pierce, author of The Turner Diaries, the notorious Neo-Nazi race-war blueprint. Death threats were also made against President Obama by Mark Williams, former chairman of Tea Party Express faction.

On the surface, the Tea Party looks to be a strong and unified movement. In reality, there are a number of national factions that comprise the Tea Party as a whole, each following its own program while being tied together by the professed goals of the Tea Party taken as a whole. One faction that was mentioned above (and the faction whose partner websites von Brunn commented on) is based is Sacramento, California. Tea Party Express was created in 2009 by a pre-existing conservative operation, the “Our Country Deserves Better” Political Action Committee. It is not a membership organization, and one thing that distinguishes the Tea Party Express from other national factions is that they are not attempting to build or support local groups. Unlike other factions, Tea Party Express lacks an online social network or forum.

The current chairman of PAC OCDB is Howard Kaloogian, a former Republican California State Assemblyman who ran a failed Congressional campaign in 2006. His campaign, though, garnered the support of one of the Milita Movement’s founders, Larry Pratt’s “Gun Owners of America Political Victory Club” (4).

The PAC’s “chief strategist” is Sal Russo, a California Republican political consultant who had run Kaloogian’s failed attempt at Congress. The PAC OCDB’s “About Us” section of their website claims that the organization goal is, “to champion the Reaganesque conservatism of lower taxes, smaller government, strong national defense, and respect for the strength of the family as the core of a strong America (5)”. In April 2009, the PAC’s coordinator, Joe Wierzbicki, wrote a memo announcing that OCDB would become part of the Tea Party movement.

In 2009, Mark Williams of Tea Party Express self-published a book entitled It’s Not Right versus Left, It’s Right versus Wrong; Exposing the Socialist Agenda, which was republished in 2010 under the title of Taking Back America One Tea Party At A Time. In a chapter entitled “Some people should not vote,” Williams makes no attempt to hide his elitist politics when he writes that, “Sometimes the best choice for the rest of us is if some of us don’t vote at all (pg. 122)”. He later compares Obama’s administration to the seven deadly sins, exemplifying once more his irrationality and metaphysical style of argument. The passage reads:

“Barack Obama and his followers embody the Seven Deadly Sins; pride, greed, envy, wrath, lust, gluttony and sloth. … The man and those around and allied with him are driven by a narcissistic pride that allows no room for being wrong in his worldview, nor does it allow room for facts to derail his increasing, angry determination to not be disputed. He and his kind derive power from the exploitation and feeding of his followers’ envy, greed, sloth, and gluttony. Where the President deviates from garden variety liberalism and ventures deep into the depravity of authoritarian socialism is the sin of wrath” (pg. 163-164). 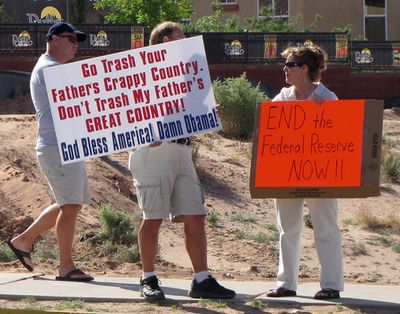 The faction, “Tea Party 1776,” has its headquarters in Houston, Texas, and is the faction most closely related to the Minutemen anti-immigrant vigilante group. The group is led by Dave Robertson, a former Naval officer who served in the Marine Corps. In a letter sent out to their supporters on April 20, 2010 entitled “Tea Party Takes over Utah,” Robertson held the view that, “We can do this the easy way or the hard way. If the Republican Party or the Democrat Party does not turn Conservative, and soon, then it will leave the Tea Party no choice but to take them over and clean house.” It should be noted that Robertson was the man who was gained notoriety for holding up a sign that read “Congress = Slaveowner, Taxpayer = Niggar” (6).

On June 8, 2009, Robertson announced that he was forced to sell off the teaparty.org domain name to the highest bidder on Ebay (7). At that point Stephen Eichler, who had graduated from Trinity Law School in 2005 but had never joined the California Bar Association, and Tim Bueler, a media savvy business-type, stepped in. Both men were leaders of the anti-immigrant vigilante organization, the Minuteman Project. Eichler was its executive director and Bueler its media director.

Another Tea Party faction that specializes in “nativism” is ResistNet. This faction began holding protests as soon as the idea first took off in 2009. In March of that year, they held a Louisiana based protest in the city of Lafayette (8). By April, ResistNet had started working with FreedomWorks, and Dawald became one of the three National Coordinators for the September 12, 2009 March on DC. ResistNet listed 142 different local Tea Party chapters in 34 states, and has worked at one time or another with all the national Tea Party factions. As mentioned above, ResistNet has acquired a taste for attracting “nativists” and anti-immigrant advocates.

A few examples include: Robert Dameron, founder of Citizens for the State of Washington (Yakima, WA); Wendell Neal, leader of the Tulsa Minutemen (Broken Arrow, OK); David Caulkett, creator of IllegalAliens.us and Report Illegals (Pompano Beach, FL); and Rosanna Pulido, the founder of the Chicago Minutemen and a former staffer for the Federation for American Immigration Reform (Chicago, IL).

An oft-noted Tea Party organization, “FreedomWorks,” is a Washington, D.C. based faction led by former House Majority Leader Dick Armey. FreedomWorks was born out of one the organizational splinters and disagreements in a 2003 conflict within a conservative think-tank known as Citizens for a Sound Economy (CSE). Like other right wing libertarian groups, FreedomWorks has supported: Social Security privatization, tax cuts for the wealthiest Americans, caps on lawsuit damages, deregulation and free trade. It has opposed efforts to address global climate change, and it has received sizable industry funding.

FreedomWorks Tea Party membership is actually the second smallest of the national factions, despite gaining more attention that most other factions. It had 600,000 online activists as of August 1, 2010 (9). These are concentrated in the Northeast, particularly the corridor from Boston to New York City to Washington DC. Other clusters are in Texas and Florida.

In August 2009, Dick Armey announced that “his organization’s members are ready to sabotage immigration reform, a cap-and-trade proposal and other Democratic legislative priorities that are likely to stir the conservative base” (10). 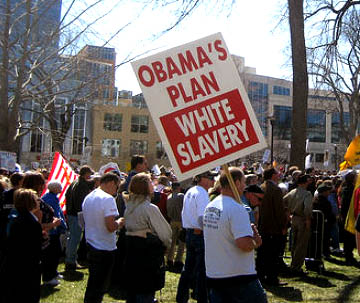 In January 2010, an assortment of Tea Party groupings released the “Declaration of Tea Party Independence,” although Tea Party spokesmen refused to comment on the groups involved in its drafting (11). The five-page document declares war on the Democratic Party and moderate Republicans, as well as stating openly, “We are the Tea Party Movement of America and we believe in American Exceptionalism” (12). In other words, they are giving themselves and the U.S. an excuse for global imperialism and national chauvinism.

The Tea Party is nothing more than a factionalist hodgepodge of all that is reactionary. Their racism, sexism, homophobia and xenophobia have been documented many times and have been witnessed time and time again through real world example. In the long term, such a reactionary line filled with hate, egoism, and nationalism is doomed to fail. The Tea Party is not as strong as they would like you to believe.