Home › International › Britain › Les Hinton sacrificed, but the worst is yet to come for News Corp

Les Hinton sacrificed, but the worst is yet to come for News Corp 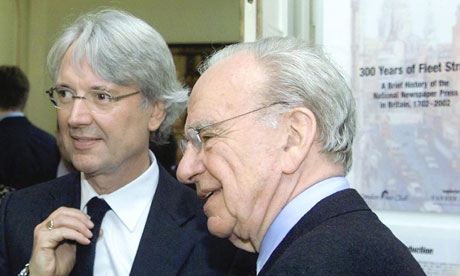 Every time Murdoch ditches a key executive, the flames of scandal flick ever closer to him, writes Matt Wells

No relationship is safe, no loyal bond strong enough for Rupert Murdoch who – looking more than the sum of his 80 years – is mounting a final battle to save the company he built from nothing.

His decision to throw Les Hinton to the wolves is his most dramatic move yet. For more than 50 years, as a journalist and then an executive, Hinton loyally served the Murdoch empire from its roots in Australia to the height of its power in New York.

Now, in a desperate effort to save News Corporation’s most valuable assets – its 27 US broadcast licences and the 20th Century Fox movie studio – Murdoch is prepared to sacrifice one of his closest allies.

The problem for Murdoch is that every time he ditches a key executive, the flames of scandal flick ever closer to him.

Hinton was ditched because he was the crucial link between Murdoch’s valuable US businesses and the tainted operation in Britain. He was at the helm of NI – the holding company for his UK newspapers including the News of the World and the Times – when it seemed that everyone who was in sniffing distance of a significant news story found their phones being hacked.

Questions were being raised about what Hinton knew about corrupt payments to London police officers: if he was shown to have been aware of them, that would be a felony in the US under the Foreign Corrupt Practices Act.

The problem for News Corp now is that, at every stage, its attempts to contain this story have failed. The decision to close the News of the World was motivated in part to save the chief executive of NI, Rebekah Brooks: that decision bombed and Brooks resigned on Friday.

But the departure of Brooks was not enough to contain the scandal in Britain, so Hinton, who has been more significant to the company’s fortunes and to Murdoch personally for far longer than Brooks, also left.

The inevitable next move for Murdoch is prolicide. His son James, appointed in 2007 as chairman and chief executive of News Corporation’s operations in Europe and Asia, based at News International’s headquarters in Wapping, east London, clings on – but only for now.

In London, James Murdoch oversaw the response to the hacking scandal. He approved the £700,000 hush money paid to Gordon Taylor, the former chief executive of the Professional Footballers’ Association – a decision he has blamed on poor advice. (The legal director of News International, Tom Crone, was one of the executives of News International to leave this week.)

The departure of Hinton suggests that News Corporation has finally got to grips with the global significance of this story, but the worst is yet to come. The FBI has launched an investigation into accusations that News of the World journalists asked a former New York police officer for the phone records of relatives of 9/11 victims. If that toxic allegation is shown to have been true, one thing is certain: Fox News is finished, along with the rest of News Corporation as we know it.

The emotional supercharge of 9/11 in the US is many times greater than Milly Dowler in the UK – and look what happened here.

Commentators have compared the crisis to Watergate; Carl Bernstein, the former Washington Post reporter whose revelations helped depose a US president, says it is evident to him the events of the past week “are the beginning, not the end, of the seismic event”.

To coin a famous Murdoch newspaper headline: will the last person to leave News Corporation turn off the lights?

Like Loading...
‹ Israel seizes French boat heading for Gaza
Gay Couple Told to Move to Back of Bus ›