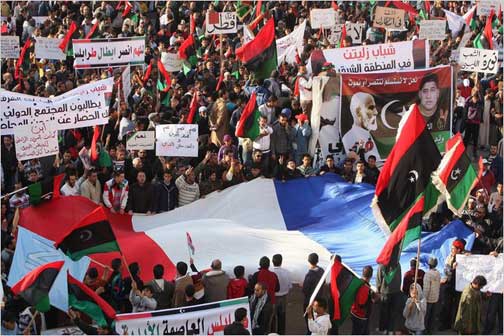 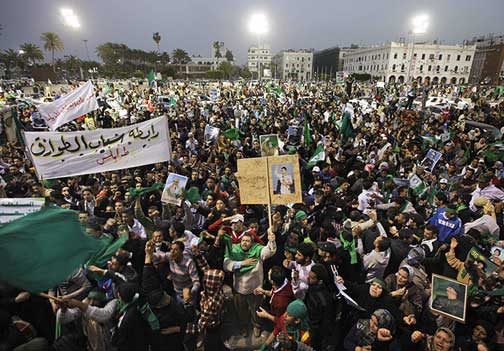 Muammar Gaddafi is still at large as loyalist forces staged a defiant and bloody last stand in the Libyan capital against advancing rebels.

In a morale boosting development for the regime, the embattled dictator’s son Saif al-Islam also appeared in Tripoli – just days after he was reportedly arrested by anti-government forces.

Television images showed a jubilant and free Saif al-Islam meeting supporters outside a loyalist-held hotel before claiming that forces loyal to his father had “broken the backbone” of the rebel offensive. He also indicated that Gaddafi remained in the violence-torn capital, stating that the weakening regime remained in control.

Saif al-Islam’s unlikely appearance came after David Cameron and President Obama called on Gaddafi to “relinquish power once and for all”.

The leaders shared a late night telephone call during which they discussed plans for a “peaceful transition to democracy”. But they also warned rebels to continue “avoiding civilian casualties” and preside over reforms that were “just and inclusive for all of the people of Libya”.

Loyalist forces fought fierce battles as rebels surged into Tripoli from all directions, taking control of large areas of the city. There were significant casualties after clashes around the dictator’s heavily fortified compound.

The head of the Libyan National Transitional Council (NTC), Mustafa Abdel Jalil, warned that victory was not yet complete. But he added: “The youth of Libya have written an epic heroic battle.”

Saif al-Islam, who is regarded as Gaddafi’s immediate successor, was pictured outside the Hotel Rixos in the early hours where he spoke to western journalists before driving in a convoy through loyalist strong-holds in the city. He said the rebels had fallen into a “trap” in Tripoli, adding: “We are going to win, because the people are with us.”

Mr Cameron, who broke off his holiday in Cornwall as rebel forces advanced on Tripoli, said people should be “proud” of Britain’s role in the uprising but stressed there was no room for “complacency”. Speaking in Downing Street he called on Gaddafi to “stop fighting, without conditions”.

He added: “Our task now is to do all we can to support the will of the Libyan people which is for an effective transition to a free, democratic and inclusive Libya. This will be and must be and should be a Libyan-led and Libyan-owned process with broad international support co-ordinated by the UN. This has not been our revolution, but we can be proud that we have played our part.”