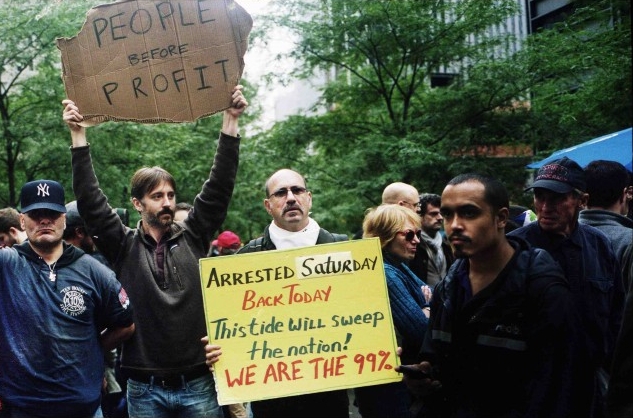 (Reuters) – Labor unions including nurses, and transit workers were set to join the growing anti-Wall Street movement march on Wednesday through New York’s financial district, and some college students walked out of classes in solidarity.

The American Federation of State County and Municipal Employees, Communications Workers of America and the Amalgamated Transit Union said they would be joining the protesters voicing discontent and anger over such issues as high unemployment, home foreclosures and the 2008 corporate bailouts.

Students on college campuses added their voices, with walkouts set on Wednesday at some 75 universities across the nation.

“We stand in solidarity with those protesting Wall Street’s greed,” said Gerald McEntee, president of the 1.6 million-member AFSCME union, in a statement. “The economy that has wrecked so many lives, obliterated jobs, and left millions of Americans homeless and hopeless is the fault of banks that gamble with our future.”

The CWA, representing 600,000 workers, said in its statement:

“It is an appropriate expression of anger for all Americans, but especially for those who have been left behind by Wall Street.”

In Boston, nurses planned to rally in support of the Occupy Boston protest, according to the Massachusetts Nurses Association website. Boston protesters have set up a make-shift camp in the financial district, with tents pitched across from the Federal Reserve Bank of Boston building.

Retired teacher Frank Mello, 69, said he joined the Boston movement to “demonstrate that we are stronger when we are united and Wall Street is as powerful as we allow them to be.”

“I cannot afford not to be here,” he said.

In Chicago, where dozens of protesters have gathered at the heart of the financial district every day, banging drums and holding up signs, office worker Tom McClurg, 52, said Wednesday was the first day he had joined the group.

“I’m hoping it’s going to raise awareness here of people’s opposition to domination by financial interest of their elected representatives,” he said, adding, “I think there are a million times more people not here who are sympathetic.”

The New York protests have grown bolder since they started on September 17. While the demonstrations have been largely peaceful, there have been occasional scuffles and some protesters have challenged police.

Last Saturday, more than 700 people were arrested when demonstrators blocked traffic lanes on the Brooklyn Bridge while attempting an unauthorized march across the span.

Camped out in Zuccotti Park in downtown Manhattan, the New York protesters have sometimes been dismissed by Wall Street passersby or cast in the mainstream media as naive students and mischief makers without realistic goals.

Members of the group have vowed to stay through the winter.

This week, Washington will be the site of a protest on Thursday, organizers said.

Protests have spread to Los Angeles, Baltimore, Philadelphia, Tampa, St. Louis and other cities across the nation.