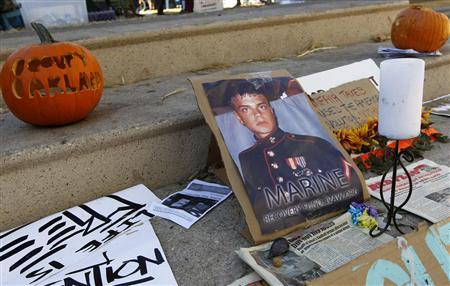 In downtown Oakland, California, where protesters affiliated with the Occupy Wall Street movement demonstrated on Wednesday, a makeshift shrine honors Scott Olsen, an Iraq war veteran who has become an accidental symbol of their cause.

Pictures of Olsen in his Marine Corps uniform sit next to images of him lying bleeding on the ground after being hit in the head by a projectile during a violent confrontation between police and Occupy Oakland protesters last week.

Those images have appeared often on social media networks, helping encourage rallies in other cities and drawing more military veterans to the movement, which began in New York as a protest against economic unfairness and corporate greed.

Olsen, 24, is being treated in a local hospital, in fair condition, according to friends.

Energized by Olsen’s fate and last week’s police move to clear their tented camp in Oakland, protesters on Wednesday sought to mount a general strike in this city across the bay from San Francisco.

The fact that this war veteran fell wounded not on a battlefield in Iraq but in an American city, apparently as a result of police action, strikes many who have followed the Occupy movement as ironic.

The portrait of Olsen that emerges from numerous interviews with friends, relatives and childhood acquaintances is one of a man whose personal journey reflects many of the social dynamics that have given rise to the Occupy movement.

He joined the military, went off to war — and came back not with horrible injuries or post-traumatic stress disorder but with a heightened sense of what was important to him and a desire to act on those beliefs.

Olsen grew up in Onalaska, Wisconsin, a pretty town in a part of the state that once relied on timber harvesting and later breweries and factories before establishing itself as a modestly prosperous healthcare, education and retail hub. As a teenager, he worked at a sandwich shop. Co-workers knew him as Scotty, a quiet kid who loved skateboarding, computer games and classic rock, and had a quirky sense of humor.

“He didn’t really want to go to college. He just didn’t think it was the right choice for him,” said Deanna Wolf, owner of Lindy’s Subs and Salads and his boss for three years.

Wolf said they talked a lot about life after high school, and that he was drawn to the military because it offered him the opportunity to get paid to “do what he enjoyed,” which was playing with computers.

Olsen served two tours in Iraq, working as a technician and earning a handful of service medals. He stayed in touch with friends in Onalaska while in Iraq, but shared little of his experiences, brushing off inquiries with a signature phrase: “I’m just doing what I do.”

But he soured on military life. He started a website, now defunct, called “I hate the Marine Corps” that served as a forum for disgruntled servicemen.

Olsen received an “administrative discharge” from the service in late 2009, according to his uncle George Nygaard, though the precise reasons for it could not be confirmed. Such a discharge can result from any number of behavioral or disciplinary issues.

Olsen’s conversion from U.S. Marine to active critic of America’s wars, and then to anti-establishment activist, appears to have come not from a specific searing experience in Iraq but rather from a more subtle evolution in the way he saw the world.

“He started a bit before he got out — he got really into it right after he got out,” said Keith Shannon, who served with him in the military and is now his roommate in the San Francisco area.

“When he came back, he had a different perspective,” Wolf said. “He seemed to be very passionate about everything. I guess having seen what he saw it had just given him another perspective. I just saw a change. He had been a funny kid, with a witty sense of humor. He was more serious.”

Shortly after leaving the military, Olsen moved to Moline, Illinois, where he worked as a computer network administrator. He became increasingly involved in the peace movement, and his political activism deepened.

He made three-hour car trips to attend peace group meetings in Chicago, according to Nygaard, his uncle, and in February of this year he joined thousands of others in the Wisconsin state capital to protest Republican Governor Scott Walker’s move to take bargaining rights away from public sector unions.

He later moved to San Francisco and landed a job at a software company.

Activists in the San Francisco area who know him say Olsen appeared to be doing well with his life, and did not seem to suffer from the kinds of emotional and psychiatric problems that afflict many veterans.

“He just showed up at one of our monthly meetings,” said Aaron Hinde, an Army veteran and friend of Olsen’s at Iraq Veterans Against the War. “It was a real surprise to have a new face just walk in. He just sat down and introduced himself.”

Emily Yates, an Army veteran and aspiring musician, met Olsen when he came with a friend to her first concert at a neighborhood bar. He helped Yates broadcast her show live on the Internet.

“It’s the fact he has a good job, he can maintain close relationships, which a lot of vets have trouble doing,” Yates said. “That’s a litmus test. If he’s dealing with stuff, he’s dealing with it in a healthy way.”

When the Occupy Wall Street movement started in New York in September and spread to other cities, Olsen began to camp out with other protesters in San Francisco at night — then went to work during the day.

After police cracked down on activists in neighboring Oakland on October 25, Olsen and a handful of other veterans made the half-hour trip across San Francisco Bay to join protesters trying to reoccupy a plaza from which police had expelled them.

“They came out to show support for the occupiers and protesters,” said Matt Howard, a friend and former Marine now studying at the University of California, Berkeley.

As protesters that night clashed with police using tear gas and “nonlethal” crowd-control projectiles, Olsen was struck in the head and taken to a hospital. He was later transferred from an Oakland hospital to one closer to his home south of San Francisco. Doctors and family members have declined to comment on his condition, saying last week that he was awake and communicative, though not able to speak.

Occupy protesters have held him up as a hero. Police brutality and the plight of veterans have joined joblessness and income inequality as key issues for many in the movement.

Some conservative bloggers, on the other hand, have called Olsen a traitor, citing his anti-Marine website and his online support for WikiLeaks, the website that published leaked U.S. military and diplomatic documents, and imprisoned U.S. Army soldier Bradley Manning, who is accused of leaking material.

In Onalaska, friends had a more personal reaction to Olsen’s fate: shock and sadness.

Christy De Ruyter, who worked with him at the sandwich shop, said she cried after seeing video of Olsen bloodied.

She added, “I was not surprised that he was at a protest, speaking up. Scott had gotten older, he’d grown up and gotten a voice. He wasn’t a completely different person when he came back. He’d just seen a lot things. And I was proud of him, standing up for something he believed in.”

Like Loading...
‹ US, UK and Israel threaten to attack Iran
At least 4,000 are at the gates to the Port of Oakland ›