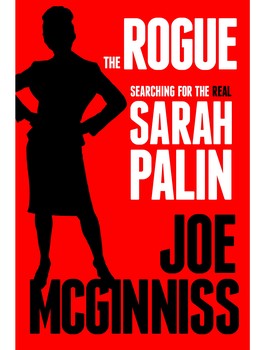 A new one-volume guide to virtually every rumor, controversy, assertion and accusation about Sarah Palin — scurrilous or otherwise — is about to hit the stands, and it’s already generating a storm of controversy.

“The Rogue: Searching for The Real Sarah Palin” by Joe McGinniss is a merciless review of Palin’s personal life and meteoric rise from the mayor of a small Alaskan town to the center of America’s political universe.

CNN obtained a copy of the book — which relies heavily on unnamed sources — earlier this week.

Palin critics will find some of their worst assumptions about the former governor reinforced by McGinniss; Palin defenders will be outraged. The book portrays Palin as an image-obsessed governor who was ill-prepared for the burdens of Wasilla’s town hall — much less for the Republican presidential ticket.

If that’s not enough for you, how about charges of racism, adultery, and cocaine abuse? Her parenting skills also leave something to be desired, if McGinniss is to be believed.

Needless to say, those closest to the former governor are not amused. The Palin family has had a rocky relationship with McGinniss since he moved in next door to their home in Wasilla last summer to research the book.

Palin’s husband, Todd, accused McGinniss this week of “relentlessly stalking my family to the point of moving in right next door to us to harass us and spy on us to satisfy his creepy obsession with my wife.”

“His book is full of disgusting lies, innuendo, and smears,” Todd Palin asserted.

The former governor told Fox News that McGinniss “needs to get a life.”

The Palin circle is not alone in its criticism of McGinniss. New York Times reviewer Janet Maslin called most of the book “dated, petty and easily available to anyone with Internet access.” Maslin accused McGinniss of using his time living near the Palins “to chase caustic, unsubstantiated gossip,” often attributed to unnamed sources such as “a friend” or “one resident.”

In an interview broadcast Thursday on NBC’s “Today” show, McGinniss said: “I think I was as fair as I could possibly have been given the fact that (Palin) told all the people who were closest to her not to talk to me.”

Palin “overreacts,” McGinniss said. “She has no modulation in her responses to stress.”

McGinniss’ other notable books include “The Selling of the President” in 1969 — a critical review of Richard Nixon’s first successful presidential campaign — and “Fatal Vision” in 1983 about Dr. Jeffrey MacDonald, a military physician who was convicted of murdering his wife and children.

McGinniss’ website calls his latest work “an extraordinary double narrative that alternately traces Palin’s curious rise to political prominence and worldwide celebrity status and then recounts the author’s day-to-day experiences as he uncovers the messy reality beneath the glossy Palin myth.”

Among other things, the book cites an unnamed friend who claims Sarah Palin once snorted cocaine off an overturned 55-gallon oil drum while on a snowmobiling trip. As for Todd Palin, he “did coke with us all,” former friend John Bitney says in the book. “He was on the end of the straw plenty.”

“I’m not saying Todd and Sarah Palin today abuse cocaine or even use it, but there is no question they both did at one point in their lives,” McGinniss told NBC.

Bitney was fired from his position as Gov. Palin’s legislative director because he “dared to embark on a romantic relationship with the estranged wife of a friend of Todd’s,” McGinniss writes in the book.

McGinniss also repeats an allegation that Palin had an affair with Brad Hanson, one of her husband’s former business partners.

Hanson denied the charge in a statement Thursday, calling it “a complete and outright lie.”

One gossipy tidbit: Palin had a sexual encounter with former NBA star Glen Rice in 1987, before she was married. Rice played for the University of Michigan at the time.

“She freaked out afterward,” McGinniss quotes a source in the book as saying. “The thing that people remember is … how completely crazy she got” over the fact that she had sex with an African-American. “She was just horrified. She couldn’t believe that she’d done it.”

Rice, according to McGinniss, remembers Palin as “a sweetheart.”

McGinniss states that, as governor, Palin fired roughly two dozen state employees who had formed a coalition known as the Diversity Group. “Her distaste for people of color … became manifest,” McGinniss asserts.

“Sarah just isn’t comfortable in the presence of dark-skinned people,” Bitney says in the book.

“From the start … Todd was the parent,” one source says in the book. “When he was home, he changed the diapers. He fed the kids. Sarah never lifted a finger.”

In her New York Times review, Maslin complained that McGinniss spent too much time writing about his own day-to-day experiences and not enough on detailed research.

Noting that McGinniss’ book includes a comment by one source on the condition of the Palins’ toilet, Maslin wrote: “A journalist as seasoned as Mr. McGinniss surely knows what these details will do to his credibility regarding the book’s more serious claims.”

Right or wrong, the book has thrust McGinniss into a media spotlight that continues to follow Palin despite the fact that she is no longer in public office and has not announced any campaign for the White House in 2012.

There is even a “Doonesbury” connection to the latest Palin drama. Garry Trudeau, the celebrated creator of the long-running comic strip, last summer developed a story line with one of his stock characters — Fox News TV journalist Roland Hedley Jr. — moving next door to McGinniss in Wasilla to spy on his spying on the Palins.

McGinniss subsequently contacted Trudeau and the pair came up with a way to release tweet-sized advance excerpts of the book in “Doonesbury” — this time via a pre-publication copy of the manuscript of “The Rogue” that lands in the fictional Hedley’s hands.

The “Doonesbury” story line has Hedley’s boss at Fox News warning him to protect fellow Fox contributor Palin in his coverage of the book, and Hedley tweeting misleading depictions of the real excerpts.

Several newspapers, including the Chicago Tribune and the Atlanta Journal-Constitution, have decided against running the installments of “Doonesbury” that involve the Palin book.

“This week we are not publishing ‘Doonesbury’ comic strips because they do not meet our standards of fairness,” said a published note by Tribune Editor Gerould Kern. The Tribune noted that copies of the book were unavailable for review.

Maslin wondered in her review what was stopping the Tribune and others from publishing the cited strips.

“Is it the book’s intrepid reporting, or its questionable tone?” she asked. “Mr. McGinniss’s most quotable, inflammatory lines call Ms. Palin a clown, a nitwit, a rabid wolf and a lap dancer — and those aren’t the parts that assail her as a wife and parent.”

CNN’s Alan Silverleib and Tom Cohen contributed to this report