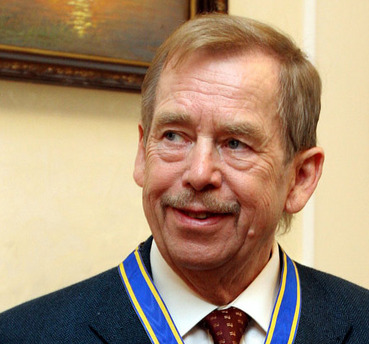 No figure among the capitalist restorationists in the East has won more adulation from U.S. officials, media pundits, and academics than Vaclav Havel, a playwright who became the first president of post-Communist Czechoslovakia and later president of the Czech Republic. The many left-leaning people who also admire Havel seem to have overlooked some things about him: his reactionary religious obscurantism, his undemocratic suppression of leftist opponents, and his profound dedication to economic inequality and unrestrained free-market capitalism.

Raised by governesses and chauffeurs in a wealthy and fervently anticommunist family, Havel denounced democracy’s “cult of objectivity and statistical average” and the idea that rational, collective social efforts should be applied to solving the environmental crisis. He called for a new breed of political leader who would rely less on “rational, cognitive thinking,” show “humility in the face of the mysterious order of the Being,” and “trust in his own subjectivity as his principal link with the subjectivity of the world.” Apparently, this new breed of leader would be a superior elitist cogitator, not unlike Plato’s philosopher, endowed with a “sense of transcendental responsibility” and “archetypal wisdom.” Havel never explained how this transcendent archetypal wisdom would translate into actual policy decisions, and for whose benefit at whose expense.

Havel called for efforts to preserve the Christian family in the Christian nation. Presenting himself as a man of peace and stating that he would never sell arms to oppressive regimes, he sold weapons to the Philippines and the fascist regime in Thailand. In June 1994, General Pinochet, the man who butchered Chilean democracy, was reported to be arms shopping in Czechoslovakia – with no audible objections from Havel.

Havel joined wholeheartedly in George Bush’s Gulf War, an enterprise that killed over 100,000 Iraqi civilians. In 1991, along with other [e]astern European pro-capitalist leaders, Havel voted with the United States to condemn human rights violations in Cuba. But he has never uttered a word of condemnation of rights violations in El Salvador, Columbia, Indonesia, or any other U.S. client state.

In 1992, while president of Czechoslovakia, Havel, the great democrat, demanded that parliament be suspended and he be allowed to rule by edict, the better to ram through free-market “reforms.” That same year, he signed a law that made the advocacy of communism a felony with a penalty of up to eight years imprisonment. He claimed the Czech constitution required him to sign it. In fact, as he knew, the law violated the Charter of Human Rights which is incorporated into the Czech constitution. In any case, it did not require his signature to become law. In 1995, he supported and signed another undemocratic law barring communists and former communists from employment in public agencies.

The propagation of anticommunism has remained a top priority for Havel. He led “a frantic international campaign” to keep in operation two U.S.-financed, cold war radio stations, Radio Free Europe and Radio Liberty, so they could continue saturating Eastern Europe with their anticommunist propaganda.

Under Havel’s government, a law was passed making it a crime to propagate national, religious, and CLASS hatred. In effect, criticisms of big moneyed interests were now illegal, being unjustifiably lumped with ethnic and religious bigotry. Havel’s government warned labor unions not to involve themselves in politics. Some militant unions had their property taken from them and handed over to compliant company unions.

In 1995, Havel announced that the ‘revolution’ against communism would not be complete until everything was privatized. Havel’s government liquidated the properties of the Socialist Union of Youth – which included camp sites, recreation halls, and cultural and scientific facilities for children – putting the properties under the management of five joint stock companies, at the expense of the youth who were left to roam the streets.

Under Czech privatization and “restitution” programs, factories, shops, estates, homes, and much of the public land was sold at bargain prices to foreign and domestic capitalists. In the Czech and Slovak republics, former aristocrats or their heirs were being given back all lands their families had held before 1918 under the Austro-Hungarian empire, dispossessing the previous occupants and sending many of them into destitution. Havel himself took personal ownership of public properties that had belonged to his family forty years before. While presenting himself as a man dedicated to doing good for others, he did well for himself. For these reasons some of us do not have warm fuzzy feelings toward Vaclav Havel.