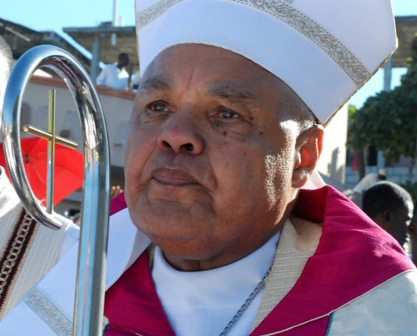 Did Bishop Louis Kébreau, president of the Haitian Episcopal Conference, call on Haitian President Martelly to be ruthless and dictatorial?

In an article published on Aug. 11 by the Haitian daily newspaper, Le Nouvelliste, Bishop Kébreau, a close friend of President Martelly, urged him to put his “Sweet Micky pants on” so as to govern the country. Martelly’s administration has essentially not even begun to function since Parliament refused to accept two of his selections for prime minister.

The upper echelons of the Catholic Church in Haiti and the Vatican have a deplorable history of backing repression. The Vatican, virtually alone in the world, recognized the Cedras military dictatorship of 1991-1994. Recent WikiLeaks have exposed the Vatican’s behind the scenes encouragement of U.S. efforts to undermine democracy in Haiti prior to the 2004 coup. After the coup, the Vatican openly applauded it by saying there was “nothing to regret” about Aristide’s ouster.

To defend his remarks, Bishop Kébreau said on Radio Magik 9 that he was misinterpreted and that there was “no question of repression, no question of dictatorship.” But he added, “If we continue to undress the president we will go nowhere.”

It is extremely unlikely that Bishop Kébreau will be punished by his superiors for his openly partisan intervention in Haitian politics. However, it was Bishop Kébreau himself who supported a letter to suspend the late Father Gerard Jean-Juste in his sacerdotal function in 2006 while imprisoned by the Latortue dictatorship, no less. 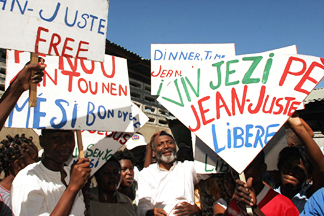 The Haitian people, who had fought fiercely for his freedom, welcome their beloved Father Jean-Juste on his release in 2004 from his first stint in prison (above) and again on Nov. 26, 2007, when the charges against him were finally dropped (below). Cruelly punished by both the Haitian government and the church, he was imprisoned again in 2005 when President Latortue feared he would run for president in the 2006 election and he was stripped of his role as pastor of St. Claire’s, where he had fed hundreds of children daily. In prison, he fell gravely ill with leukemia and was eventually released to seek medical treatment in Miami. But the church cut off his health insurance and he died in 2009. – Photo below: Wadner Pierre

Father Jean-Juste was a vocal supporter of Aristide and was suspending from celebrating mass as punishment for being political. While human rights groups around the world, including Amnesty International, called for Jean-Juste’s release, the Catholic Church in Haiti decided that even more punishment was justified.

None of this is surprising for anyone who has followed the involvement of the church in Haiti’s political affairs even before the country’s independence in 1804.

As a former altar boy, I am very disturbed by the declaration of someone of high profile in the church like Bishop Kébreau; but I am not surprised, because powerful clerics like him have always fought against a democratic government in Haiti. They have always been on the side of the elite – about 5 percent of the population.

In December of 2007, while celebrating the 65th anniversary of the consecration of Haiti to Our Lady of Perpetual of Help, Bishop Kébreau made a vague statement urging Rene Preval – then president – to deal with “social injustice.” Of course, Bishop Kébreau did not identify the cause of this “injustice.”

May the leaders of the Catholic Church become, one day, promoters of social justice, not social injustice and despotism. Amen.