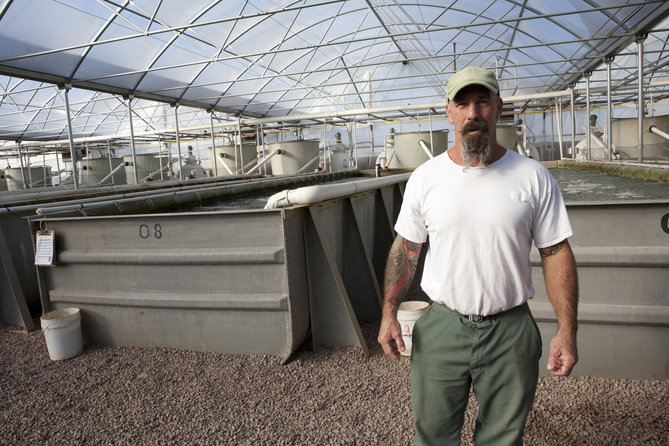 At the East Cañon Correctional Complex, the tilapia program, staffed by inmates, has become a model for other prisons across the country. Photos by David Kidd.

The Cañon City Correctional Complex in southern Colorado is a veritable city of prisoners. More than 8,000 inmates are housed in the complex of 13 correctional facilities — nine state and four federal — most notably in the Supermax, a state-of-the-art federal facility known as the “Alcatraz of the Rockies.” But on a recent early spring day, Colorado Correctional Industries (CCi) Director Steve Smith isn’t concerned with inmates. He’s concerned with tilapia.

In a greenhouse in the center of the correctional complex, Smith surveys the fish splashing and thrashing about in a pool of murky green water. “This is their death row,” says Smith, seemingly oblivious to the warm water pelting his gray suit. From here, the hormone-free tilapia will be killed, gutted, cleaned, chopped, vacuum-sealed and ultimately shipped to Whole Foods stores.

This fish-farming program is staffed by inmates, and that’s not the only job performed by the Cañon City prisoners. Across some 6,000 rural acres, low-security inmates also raise cows and goats to produce milk, craft custom fishing rods, train dogs, grow flowers, tame mustangs, recycle trash from nearby counties to resell it, build chairs for state agencies, and more.

CCi receives no tax dollars, Smith says, but the entire operation last year generated $57 million in revenues, which benefits the state economically. “Every inmate that works here saves taxpayers $5,000 a year,” Smith says. “Most states are going away from agriculture, selling land to balance their budgets. We’re trying to expand.”

The idea to put prisoners to work has been around for decades. In the 1950s, chain gangs in the South built roads and broke rocks as a form of punishment. But now, with states drowning in budget deficits, prison labor has become more valuable than ever. In the face of falling tax revenue and fading federal financing, officials are finding creative ways to utilize inmate labor. In Washington state, inmates recycle mattresses that would have ended up in landfills. In California, they help clean state parks, and at the California Institution for Men, some perform underwater welding work. In Hunterdon County, N.J., they clear dead deer off local and county roads to ease the costs of roadkill removal.

Cheap prison labor, supporters say, helps offset the high costs of incarceration, prepares inmates for real-world jobs and reduces recidivism in a system plagued by overcrowding. But public employee groups object to what they say amounts to inmates’ taking over jobs that once belonged to government workers.

Last year in Racine County, Wis., the decision to use inmates to cut grass along state highways at no cost to taxpayers hit a snag when a county employee union successfully argued that the move would violate county labor contracts. In 2009, Ohio wanted to use prisoners with good records to replace statehouse janitors laid off because of budget cuts. After the Ohio Civil Service Employees Association filed a grievance, the proposal was put on hold. The union argued that the plan to employ inmates was not only unfair, but also unsafe given the number of children who tour the statehouse.

In Nebraska last summer, even as state corrections officers were forced to take unpaid furloughs, 250 prison inmates reportedly received $525 bonuses for showing up on time and doing good work at prison shops. According to the state corrections agency, the bonuses were part of a long-standing program to reward inmates for good behavior. But public employee representatives saw the move as grossly unfair. “Inmates are looking at employees and saying, ‘Ha ha, I got a bonus,’ while the employees are taking pay cuts,” says Julie Dake Abel, executive director of the Nebraska Association of Public Employees. “It’s not good for the morale of public employees.”

Despite public employees’ concerns, the recession has spurred the expansion of prison programs in recent years, and officials don’t plan to stop. Following Colorado’s lead, Correctional Industries in Washington is in the infant stages of a tilapia farm. In its mattress recycling program, inmates process 36,000 mattresses a year to put them back into retail. “It works well for a prison because we don’t have the labor costs,” says Tom Beierle, assistant director for Correctional Industries in Washington. “Am I making a lot of money on it? No. But if I can break even and keep the mattresses out of the landfills, does the state of Washington benefit? Definitely.”

Like Loading...
‹ The World is a Ghetto: Global Slums – Out of Sight and out of Mind: Deterioration of the Human Condition
St. Patrick’s Day and the Irish Struggle ›