Zimmerman, One-Man Lynch Mob, Intended To Kill Trayvon All Along 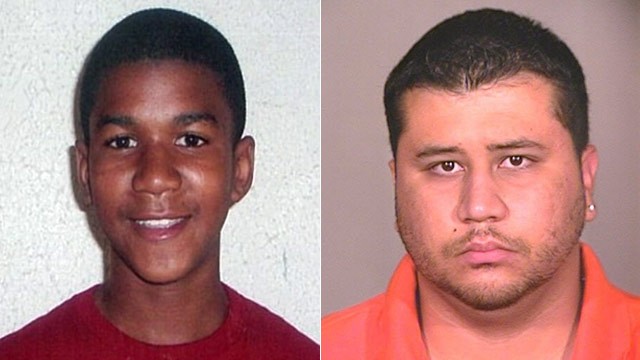 The parents of Trayvon Martin have demonstrated remarkable dignity and composure under duress and one can see why their son’s execution by the one-man lynch mob, George Zimmerman, has garnered global support.

Yesterday while in New York City the parents appeared at what was billed as a “Million Hoodies March” on Union Square and hundreds of supporters showed up on short notice.

“My son did not deserve to die,” Sybrina Fulton, Trayvon’s mother, told supporters. “Our son is your son.” Several supporters –all strangers– wept when she uttered these calm measured words. She also said: “My heart is in pain.”

Trayvon’s father, Tracy Martin, also was at the rally and said: “If Trayvon had been alive he would be right here on these steps with you guys rallying for justice—-Trayvon Martin is you. Trayvon Martin did matter. And I just want New York to know that we’re not going to stop until we get justice for Trayvon.”

The insulated town of Sanford, Florida, where Trayvon was executed on the street by Zimmerman is beginning to wake up. The City Commission returned a 3 to 2 “no confidence” vote in the Police Chief Bill Lee, who should now be fired immediately or forced to resign.

There seems to have been a coverup by the Police. Zimmerman should have been arrested promptly on the night of the shooting. Instead, it was Martin, who was given a drug test even though he was already dead; Zimmerman who didn’t sound sober on his 911 call, should have been the one tested.

He was, after all, the one who shot and killed another human being. Zimmerman was allowed to go home with his gun, meaning the weapon was never even tested to determine the distance from which it was fired as well as the direction and angle.

Florida’s so-called “Stand Your Ground” law permits people to not have to back off when confronted with a threat. This law, which itself is outrageous, does not apply in this case. During the 911 call Zimmerman told the dispatcher that he was pursuing Martin; this is a critical admission. It means Zimmerman could not have feared for his life, he was the hunter; Trayvon Martin was his prey. It was Trayvon who eventually stood his ground after he realized he was being pursued and asked why Zimmerman was following him.

But it was Zimmerman who had the gun. He shot and killed the teenager who had been on the phone with his girlfriend; she urged him to run but he refused, probably aware that a young Black man on the run was justifiable moving target for shooting, in the eyes of many White folk.

The 911 call makes it clear that the killer had intention to confront Trayvon and to be willing to engage him, even with lethal force. Zimmerman knew he could, and would use his gun. There is pre-meditation here.

Even after the dispatcher told Zimmerman not to follow Trayvon Martin, he did so anyway. Martin was returning to the home of his father and his father’s girl friend to watch the second half of the All Star basketball game and had in his hands Skittles and a soda. He was defenseless and unarmed.

When Zimmerman made the 911 call he was actually manufacturing an alibi. Clearly, he was speaking to a witness, the dispatcher, to whom he wanted to criminalize the boy in order to inoculate himself from guilt for the action which he had already decided to take–which was to kill Trayvon:

“He looks like he’s on drugs or something,” and “he’s wearing a hoodie,” and “now he’s just staring at me,” and “he’s got his hands on his waist band,” and “and he’s a Black male,” and “something’s wrong with him” and “he’s got something in his hands” and “they always get away..”

Some media have raised questions as to whether Zimmerman also said the “fucking coons” always get away. There are reports that this slur can be heard on one version of the police 911 tape and not on other versions. Any investigation should determine whether the police tapes have been doctored given the suspicious and incompetent actions by Sanford Police.

The Department of Justice and FBI are now involved in the Martin case. The Governor of Florida also has asked for a review. The State’s attorney has announced that a Grand Jury could hear the facts by April 10.

National media must keep the eyes of the world on this Southern murder case. Zimmerman must be arrested and tried for the execution of an innocent young man. The preposterous “Stand Your Ground” law must be repealed before another Zimmerman decides to become judge, jury, and executioner.

Like Loading...
‹ U.S. official: Bales to be charged with 17 counts of murder
Review of “The Hunger Games” ›