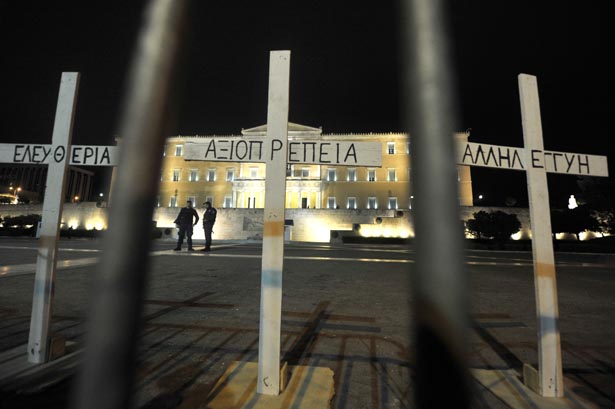 Crosses reading 'Solidarity,' 'Dignity ' and 'Freedom' stand in front of the Greek parliament, where demonstrators gathered in protest after a retired pharmacist shot himself last week, saying austerity cuts had left him in deep poverty.
(Photo by Louisa Gouliamaki/AFP/Getty Images)

“I am not committing suicide. They are killing me.” According to one witness, these were the last words of 77-year-old Dimitris Christoulas before shooting himself in the head in Greece’s Syntagma Square last week.

Speaking to The Guardian, mourners of the retired pharmacist agreed. “For me it is not a suicide … It is murder. A very obvious murder. It is financial, economic murder.”

Hundreds gathered on Saturday to attend a funeral for Christoulas, described as a “martyr for Greece” by the Greek newspaper Eleftheros Typos. The paper acknowledged that his final act, committed in Athens’ busiest square situated across from the Greek Parliamentary building, was filled with “profound political symbolism” and could “shock Greek society and the political world and awaken their conscience.”

The man, described by those that knew him as “quiet and gentle”, but also “a passionate leftist deeply shaken by the pain that the crisis had inflicted on his fellow citizens” felt pressed to end his life by the desecration of pensions and social programs during Greece’s intense era of austerity. “I cannot find any other form of struggle except a dignified end before I have to start scrounging for food from garbage bins,” he said in a letter he left behind.

His death has acted as the symbol for many struggling to survive as state spending has been drastically cut. International loan backers, the European Union and International Monetary Fund, have forced the implementation of austerity measures that include the slashing of pensions by up to 40 per cent and the minimum wage by one fifth while taxes continue to increase. More cuts and tax increases are being planned. At the same time, over 1 in 5 Greeks are without a job, with the number of young people out of work outnumbering those that are employed.

The day after the death of Christoulas and seven months after setting his own body on fire in an attempted suicide, Apostolos Polyzonis told CNN that these conditions are spreading, pushing more citizens to the brink.

“The situation is becoming every day worse,” he said. “Every day people lose their jobs, every day people are unable to pay rent for their house, the basics to find something to eat–the last step before doing what I did or what another human being yesterday did in Greece.”