Law allows creationism to be taught in Tenn. public schools 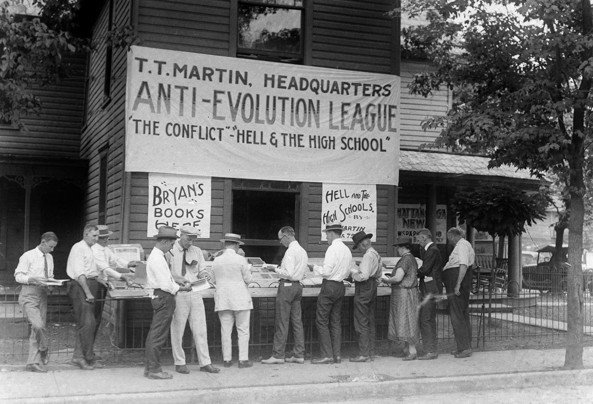 Books against the theory of evolution are sold at an outdoor stand in Dayton, Tenn., 1925, scene of the John Scopes “monkey trial. “

A bill that allows Tennessee public school teachers to teach alternatives to mainstream scientific theories such as evolution will become law this month after the governor refused to sign or veto the measure, The Washington Post’s Valerie Strauss reports.

Supporters of the law say its goal is to encourage healthy skepticism among students. “Critical thinking, analysis fosters good science,” Robin Zimmer, a biotechnology consultant and affiliate of a creationist organization, wrote in the Nashville Tennessean in March.

But critics say the true goal of what they call “the monkey bill” is made clear by the list of subjects that could be challenged by teachers during class, including global warming and evolution. The bill is a “permission slip” for schools “to bring creationism, climate-change denial and other non-science into science classrooms,” Eugenie Scott, director of the National Center for Science Education, told Nature magazine.

The American Association for the Advancement of Science and the National Association of Biology Teachers has also condemned the bill, along with more than 4,000 Tennessee residents who submitted a petition to ask the Republican governor, William Haslam, to veto the bill.

The name “monkey bill” refers to the landmark Scopes Monkey Trial of 1925, in which Dayton, Tenn., high school science teacher John Scopes was prosecuted by the state for violating a state law against teaching evolution.

The bill passed in both houses of the Republican-controlled state legislature. Under the Tennessee State Constitution, a bill automatically becomes law if the governor fails to sign it within 10 days.

“I do not believe that this legislation changes the scientific standards that are taught in our schools or the curriculum that is used by our teachers,” Haslam said in a written statement to Nature magazine.

Attempts by states to teach creationism and other alternatives to mainstream scientific theories have mostly been stymied in the past by the federal prohibition against promoting religion in public schools.

But while the overwhelming majority of scientists accept the theory of evolution as sound, some Americans continue to believe that both evolution and creationism should be taught together in public schools.

A 2010 Gallup poll found that four out of 10 Americans believe God created humans in their present form about 10,000 years ago.

At the “Miss USA” pageant last year, a number of contestants said that it was “silly” or “ignorant” not to learn both creationism and evolution in school. Miss Kentucky and Miss Alabama said they did not believe in the theory of evolution.

The new Tennessee law comes after a similar measure was enacted in Louisiana in 2008.