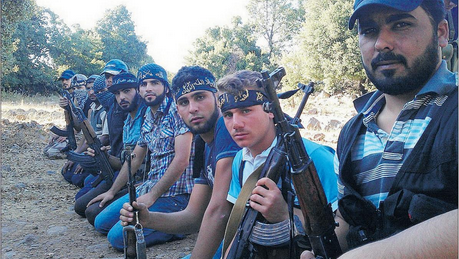 Members of the Free Syrian Army have been kidnapping people for ransom to help fund their cause.

Common criminals also getting in on the game, with wealthy families being targeted

An epidemic of kidnapping has broken out in Syria, with rebels using ransoms to fund their military operations and common criminals taking the opportunity to cash in.

In al-Bab, a town on the edge of Aleppo, the country’s second largest city, abductions have become so frequent rebels from the Free Syrian Army are publicizing a helpline number, writing it on walls and placing it on social media websites.

“When they receive a call from relatives of the victim, they track down the kidnappers. Then they either issue threats, or they go in for the rescue using force,” said a resident from the area.

Mousab Azzawi, from the Syrian Network for Human Rights, confirmed abductions were becoming more frequent. “Only recently in Aleppo we have heard of three abductions by groups asking for ransom,” he said.

Residents said all sides in the civil war were using the tactic. A student at Aleppo University who gave his name as Mohammed said the same FSA group that was hunting down the gangs of kidnappers was also running its own operations to raise “funds for the revolution.” This unit, known as the Abu Bakr al-Siddiq brigade, kid-napped the “son of my uncle’s business partner,” said Mohammed, who claimed the group demanded almost $74,000 for his release.

A former Catholic clergyman said he fled Aleppo when fighting reached his home and a number of acquaintances were kidnapped.

“The FSA know who the rich families are in Aleppo. They watch their homes and movements,” he said. “A man I know, whose father is very rich, was on the pavement when a rebel group forced him into a car and drove away. Two weeks later they called the father and demanded a huge sum of money: I think it was ($233,700). They said on the phone that they didn’t want the money for themselves, but for the revolution.”

The money was left in the appointed place and the rebels collected it with their faces covered. “Ten minutes later, he received a call telling him where his son was,” said the former clergyman.

The violence is now reminiscent of the lawlessness that gripped Iraq after the invasion in 2003, with kidnappings, mass killings and car bombings becoming near daily events in Damascus.