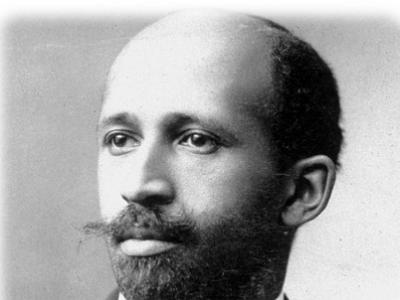 On October 20, 1956, W. E. B. Du Bois delivered this eloquent indictment of US politics and why he won’t vote in the upcoming Presidential election. Du Bois condemns both Democrats and Republicans for their indifferent positions on the influence of corporate wealth, racial inequality, arms proliferation and unaffordable health care. The article appeared in The Nation.

This article was republished in Hartford Web Publishing.

“No ‘two evils’ exist. There is but one evil party with two names.”

Since I was twenty-one in 1889, I have in theory followed the voting plan strongly advocated by Sidney Lens in The Nation of August 4, i.e., voting for a third party even when its chances were hopeless, if the main parties were unsatisfactory; or, in absence of a third choice, voting for the lesser of two evils. My action, however, had to be limited by the candidates’ attitude toward Negroes. Of my adult life, I have spent twenty-three years living and teaching in the South, where my voting choice was not asked. I was disfranchised by law or administration. In the North I lived in all thirty-two years, covering eight Presidential elections. In 1912 I wanted to support Theodore Roosevelt, but his Bull Moose convention dodged the Negro problem and I tried to help elect Wilson as a liberal Southerner. Under Wilson came the worst attempt at Jim Crow legislation and discrimination in civil service that we had experienced since the Civil War. In 1916 I took Hughes as the lesser of two evils. He promised Negroes nothing and kept his word. In 1920, I supported Harding because of his promise to liberate Haiti. In 1924, I voted for La Follette, although I knew he could not be elected. In 1928, Negroes faced absolute dilemma. Neither Hoover nor Smith wanted the Negro vote and both publicly insulted us. I voted for Norman Thomas and the Socialists, although the Socialists had attempted to Jim Crow Negro members in the South. In 1932 I voted for Franklin Roosevelt, since Hoover was unthinkable and Roosevelt’s attitude toward workers most realistic. I was again in the South from 1934 until 1944. Technically I could vote, but the election in which I could vote was a farce. The real election was the White Primary.

Retired “for age” in 1944, I returned to the North and found a party to my liking. In 1948, I voted the Progressive ticket for Henry Wallace and in 1952 for Vincent Hallinan.

“Hughes promised Negroes nothing and kept his word.”

In 1956, I shall not go to the polls. I have not registered. I believe that democracy has so far disappeared in the United States that no “two evils” exist. There is but one evil party with two names, and it will be elected despite all I can do or say. There is no third party. On the Presidential ballot in a few states (seventeen in 1952), a “Socialist” Party will appear. Few will hear its appeal because it will have almost no opportunity to take part in the campaign and explain its platform. If a voter organizes or advocates a real third-party movement, he may be accused of seeking to overthrow this government by “force and violence.” Anything he advocates by way of significant reform will be called “Communist” and will of necessity be Communist in the sense that it must advocate such things as government ownership of the means of production; government in business; the limitation of private profit; social medicine, government housing and federal aid to education; the total abolition of race bias; and the welfare state. These things are on every Communist program; these things are the aim of socialism. Any American who advocates them today, no matter how sincerely, stands in danger of losing his job, surrendering his social status and perhaps landing in jail. The witnesses against him may be liars or insane or criminals. These witnesses need give no proof for their charges and may not even be known or appear in person. They may be in the pay of the United States Government. A.D.A.’s and “Liberals” are not third parties; they seek to act as tails to kites. But since the kites are self-propelled and radar-controlled, tails are quite superfluous and rather silly.

“A.D.A.’s and ‘Liberals’ are not third parties; they seek to act as tails to kites.”

The present Administration is carrying on the greatest preparation for war in the history of mankind. Stevenson promises to maintain or increase this effort. The weight of our taxation is unbearable and rests mainly and deliberately on the poor. This Administration is dominated and directed by wealth and for the accumulation of wealth. It runs smoothly like a well-organized industry and should do so because industry runs it for the benefit of industry. Corporate wealth profits as never before in history. We turn over the national resources to private profit and have few funds left for education, health or housing. Our crime, especially juvenile crime, is increasing. Its increase is perfectly logical; for a generation we have been teaching our youth to kill, destroy, steal and rape in war; what can we expect in peace? We let men take wealth which is not theirs; if the seizure is “legal” we call it high profits and the profiteers help decide what is legal. If the theft is “illegal” the thief can fight it out in court, with excellent chances to win if he receives the accolade of the right newspapers. Gambling in home, church and on the stock market is increasing and all prices are rising. It costs three times his salary to elect a Senator and many millions to elect a President. This money comes from the very corporations which today are the government. This in a real democracy would be enough to turn the party responsible out of power. Yet this we cannot do.

“He has no clear policy on war or preparation for war.”

The “other” party has surrendered all party differences in foreign affairs, and foreign affairs are our most important affairs today and take most of our taxes. Even in domestic affairs how does Stevenson differ from Eisenhower? He uses better English than Dulles, thank God! He has a sly humor, where Eisenhower has none. Beyond this Stevenson stands on the race question in the South not far from where his godfather Adlai stood sixty-three years ago, which reconciles him to the South. He has no clear policy on war or preparation for war; on water and flood control; on reduction of taxation; on the welfare state. He wavers on civil rights and his party blocked civil rights in the Senate until Douglas of Illinois admitted that the Democratic Senate would and could stop even the right of Senators to vote. Douglas had a right to complain. Three million voters sent him to the Senate to speak for them. His voice was drowned and his vote nullified by Eastland, the chairman of the Senate Judiciary Committee, who was elected by 151,000 voters. This is the democracy in the United States which we peddle abroad.

Negroes hope to muster 400,000 votes in 1956. Where will they cast them? What have the Republicans done to enforce the education decision of the Supreme Court? What they advertised as fair employment was exactly nothing, and Nixon was just the man to explain it. What has the Administration done to rescue Negro workers, the most impoverished group in the nation, half of whom receive less than half the median wage of the nation, while the nation sends billions abroad to protect oil investments and help employ slave labor in the Union of South Africa and the Rhodesias? Very well, and will the party of Talmadge, Eastland and Ellender do better than the Republicans if the Negroes return them to office?

“What has the Administration done to rescue Negro workers, the most impoverished group in the nation?”

I have no advice for others in this election. Are you voting Democratic? Well and good; all I ask is why? Are you voting for Eisenhower and his smooth team of bright ghost writers? Again, why? Will your helpless vote either way support or restore democracy to America?

Is the refusal to vote in this phony election a counsel of despair? No, it is dogged hope. It is hope that if twenty-five million voters refrain from voting in 1956 because of their own accord and not because of a sly wink from Khrushchev, this might make the American people ask how much longer this dumb farce can proceed without even a whimper of protest. Yet if we protest, off the nation goes to Russia and China. Fifty-five American ministers and philanthropists are asking the Soviet Union “to face manfully the doubts and promptings of their conscience.” Can not these do-gooders face their own consciences? Can they not see that American culture is rotting away: our honesty, our human sympathy; our literature, save what we import from abroad? Our only “review” of literature has wisely dropped “literature” from its name. Our manners are gone and the one thing we want is to be rich – to show off. Success is measured by income. University education is for income, not culture, and is partially supported by private industry. We are not training poets or musicians, but atomic engineers. Business is built on successful lying called advertising. We want money in vast amount, no matter how we get it. So we have it, and what then?

“This might make the American people ask how much longer this dumb farce can proceed without even a whimper of protest.”

Is the answer the election of 1956? We can make a sick man President and set him to a job which would strain a man in robust health. So he dies, and what do we get to lead us? With Stevenson and Nixon, with Eisenhower and Eastland, we remain in the same mess. I will be no party to it and that will make little difference. You will take large part and bravely march to the polls, and that also will make no difference. Stop running Russia and giving Chinese advice when we cannot rule ourselves decently. Stop yelling about a democracy we do not have. Democracy is dead in the United States. Yet there is still nothing to replace real democracy. Drop the chains, then, that bind our brains. Drive the money-changers from the seats of the Cabinet and the halls of Congress. Call back some faint spirit of Jefferson and Lincoln, and when again we can hold a fair election on real issues, let’s vote, and not till then. Is this impossible? Then democracy in America is impossible.