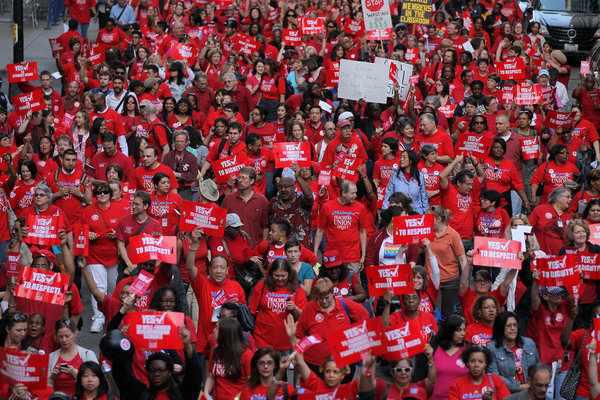 “This was a strike of choice, a bad choice for our children and not necessary,” decried an irritated Chicago Mayor Rahm Emanuel. 350,000 students and 26,000 teachers have stayed out of classes now for two days as contract negotiations take place between Chicago Public School officials and the city’s teachers’ union. This is not small beer – the strikes are taking place in the third-largest school district in the U.S.

It is also the first time such broad strike action has been used in Chicago since the four week strike of 1987, and many of the issues are similar – teaching conditions, benefits, pay raises, air-conditioning in class rooms. The target may also be, speculates Rick Perlstein of Salon (Sep 11) bullyboy plutocracy. Emanuel, in fits of misdirected toughness, has been forcing initiatives down the throats of teachers, a notable one being the lengthening of Chicago’s school day.

The force and effect of the strike may not be as significant as past actions, for the simple fact that America’s union movement has been well and truly defanged. Since June 2009, the largest teacher’s union, the NEA, has lost 100,000 members, leaving it with a membership base of 3 million (NPR, Sep 10). That said, it would be a mistake to underestimate their influence. In Perlstein’s defiant words, “It’s an inspiration to anyone frustrated that people have forgotten how good it feels to stand up to bullies – and how effective it can be.”

Unions are also easily mocked as unchanging monoliths, and have come under attack in Indiana, Idaho, Tennessee and Wisconsin. Since the 2010 elections, those states have clipped the wings of teachers keen on pursuing collective bargaining. Mitt Romney sees them as self-interested entities keen in keeping prices and costs up. Notably, there are cracks in the Democratic Party over education policy and what the reform agenda might look like. As Emanuel has himself stated, “We will do no favours to our city employees or our taxpayers if we let outdated rules and outmoded practices make important government services too costly to deliver.”

Parallel realities on the state of negotiations have formed. “The Chicago Public Schools has made proposals to change every article [of the contract],” suggests union spokesperson Stephanie Gadlin. “It is not accurate to say both sides are extremely close – this is misinformation on behalf of the board and Mayor Emanuel” (NYT, Sep 12). This should hardly come as a surprise – the Emanuel machine is smooth, slick and totally disingenuous.

The question being posed then is: to change and collaborate, or oppose and resist altogether? But this is hardly the question to ask when one considers the features of what has to change. Take teacher evaluations which, depending on how they are used, can cause considerable damage. A merit and pay system, such as what has been implemented in Denver, is one thing, but how merit is measured is often contentious. Not even the Chicago Teachers’ Union has shied away from the idea that teacher evaluations can’t be based, at least in part, on measures of student growth. The problem there lies in whether those measures are state standardized or individually designed by teachers in the district.

Banging on about teacher evaluations is a patent admission that teaching has become a consumer product that one can simply purchase from a store. Is it deficient? Does it match ‘quality assured’ practices as guaranteed by the institution that offers them? In a sense, the debate about how the quality of teachers and teaching can be assessed is a long one. What has been in dispute is how uneven the processes have been. Systems such as the edTPA, a peer-developed process that focuses on a candidate’s mastery of a certain body of knowledge and skills, is an example of an evaluation system that has received approval in some circles.

None of this gets away from a fundamental problem. The way teachers are evaluated has become a product of entrepreneurial interference and a hostage to the tech geniuses who supposedly have some inner knowledge of the teaching process. If there is an ‘app’, get it. That way lies corporatisation. This is not to say that teachers have not themselves being trying to buck assumptions that they are not accountable in their practices. A general perception, fed by Romney et al, is that they are not.

To imagine the pupil-teacher relationship as one of finance, student growth, popularity scores and spread sheets is mind jarringly obscene, but this has not stopped the process from accelerating. In fact, it is becoming more rigorous than ever, taking hold in universities at an alarming rate. As part of the same mix, the U.S. Department of Education has proposed to use the test scores of graduates’ students to evaluate schools of education. Never mind the fact that such scores are notoriously unreliable.

Once you make teachers servile to the market economy and the managerial classes, their performance ceases to be one of teaching but entertaining. One is not getting so much better teaching than better circus acts, backed by the dull machinists of power point. In that case, we get not only the teachers we deserve but the graduates we don’t want. This is truly a kingdom of dunces.

Given that unionised labour is a traditional hunting ground for Democrat votes, the Chicago strikes may have broader resonance. President Obama can’t afford to have too many distractions leading to the election but then again, whoever wins come November will not prevent the incessant march of corporatized teaching.

Like Loading...
‹ Political Cartoon: “Innocence of Muslims”: The film that KILLS!
Video: US embassies in Sudan, Tunisia, Yemen attacked by angry mobs ›