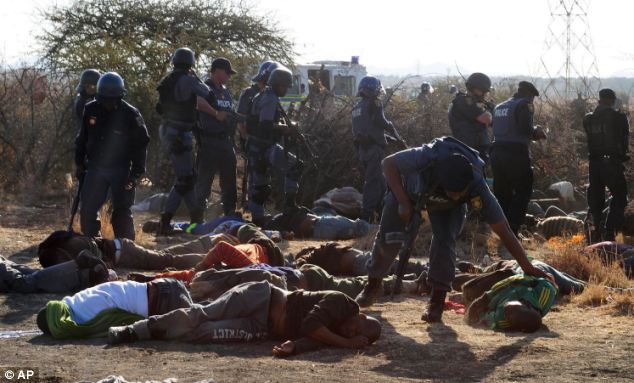 South Africans need calm heads to examine what caused the slaughter of 44 workers and police officers at the Marikana mine. The judicial commission of inquiry appointed by President Jacob Zuma may present the facts.

But we have to go past who fired the first bullet. It will take painstaking commitment on all sides to rebuild trust. This is a complex dispute that is a political microcosm of South African society.

The critical question is how could this have happened in 2012, 18 years into our democracy and the centenary of the foundation of the African National Congress? The fiasco of Marikana is a sign of failure of leadership on all sides.

There is growing ferment in South Africa. The people in our townships, rural areas and squatter camps are bitter that democracy has failed to deliver the fruits they see a tiny elite enjoying. Many leaders they once revered have abandoned the townships for the Armani lifestyle previously exclusive to leafy white suburbs. They have long lost touch with the disgruntlement brewing in society.

To compound the situation, a new, predatory elite of middlemen is unashamedly corrupting state officials and stealing tenders and licences. They cloak their crime of looting the state treasuries with militant, populist rhetoric that further inflames the already difficult reality. But they strike a chord with the growing underclass.

There is legitimate anger and restlessness at the obscenity of the inequalities in wealth. The poor well understand they are election fodder. As a new apartheid grows, the horrified citizens of South Africa ask the question: “Why are we such a violent society?”

In the absence of strong, legitimate political organisation, communities see violence as the only language leaders will listen to. It is a vicious cycle that sees poor and forgotten people burn down any institution representing the state, whether a school, a library or a public building.

A militarised, over-armed and poorly trained police force is mobilised as the battering ram of political enforcement. But a narrow law and order approach will not work in this depressing context.

The growth of the platinum belt in North West Province, where Marikana is located, created an opportunity to develop the new, non-racial towns of the future. Instead, we see the mushrooming of informal settlements, racial divisions and the spatial planning of South Africa’s apartheid past.

As job seekers flooded in from all over the country, the competition over scarce resources was inevitable. We ignored the festering discontent in the bosom of our economy.

Lonmin appears to have been woefully oblivious to the conditions its workers lived under. It is a reminder to corporate leaders that social stability must be part of the business agenda. It cannot be written off as a responsibility of local government and political leaders.

Marikana is a wake up call that leaders in the unions, politics and business should heed. The platinum mines yield a precious metal while many of their workers live in informal settlements with minimal services.

Today 15 million South Africans are only saved from starvation by the social grants they receive every month. In the context of vast structural unemployment the average worker supports up to eight people on a take-home minimum wage.

According to labour force survey figures, 50 per cent of all workers earn less than R3,000 a month ($350). Many of these workers are the sole income earners in their households.

The South African people are exhausted by the excuses given by our leaders. They want solutions and not more task teams, policy statements and conferences. They want action that improves day-to-day lives, that delivers water and textbooks to schools, and medicines to our clinics.

The genuine anger in society needs a genuine political solution.

The majority of South Africans believe we have the opportunity to build a model of social inclusion and development. The lessons from Marikana should lead us towards the tough choices that place the interests of people at the forefront.

Taking the entire country back to work and the road to successful democracy after a catastrophe such as Marikana is the ultimate test for any political leadership.

Jay Naidoo was the founding general secretary of the Congress of South African Trade Unions and a minister in the Cabinet of President Nelson Mandela. A version of this article has appeared in the Financial Times, London.