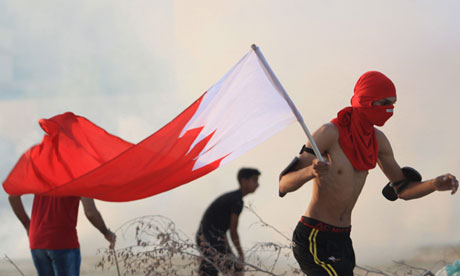 A masked pro-reform protester holds the Bahraini flag in a cloud of teargas during clashes with police in Sitra village, south of the Bahraini capital Manama Photograph: EPA

Bahrain is facing international censure after announcing a ban on all protest gatherings and threatening to take legal action against opposition groups that organise anti-government demonstrations.

The order, announced by the interior ministry in Manama on Tuesday, is the most-far reaching attempt to quell unrest in the Gulf kingdom since martial law was imposed last year. It is a blow to the hopes of western countries trying to balance their own strategic and economic interests while encouraging peaceful reform.

Britain swiftly issued a statement expressing “concern” at what it called an “excessive” blanket ban.

Sheikh Rashid al-Khalifa, the interior minister, said that “repeated abuse” of the rights to freedom of speech and expression could no longer be tolerated. In future protests would only be permitted once security and stability were sufficient to maintain national unity.

Bahrain, where a Sunni minority rules over a Shia majority, is often described as lying on a sectarian fault line of the Arab world and on the frontline of a tense confrontation between Iran and its Gulf Arab neighbours.

The interior ministry said that any “illegal rally or gathering would be tackled through legal actions against those calling for and participating in it”.

Bahraini observers said the move appeared to reflect divisions and hesitation within the government and the lack of dialogue between it and the opposition. “The situation is stagnant and there is no horizon for a political solution,” said Mansoor al-Jamri, editor of al-Wasat newspaper. “They are tightening their grip, but this is not a crackdown. That will mean mass arrests and opening the jails and taking senior people into custody.”

Bahrain has permitted limited protests and marches, but much of the violence occurs outside authorised gatherings.

Bahrain’s brief chapter of the Arab spring – known to activists as the “Pearl Revolution” – ended last March, when the Saudis and other members of the Gulf Cooperation Council intervened to help restore order. But sporadic protests have continued and escalated in recent days.

The target of the warning appeared to be the largest Shia political bloc, al-Wefaq, which has organised many marches. Another rally was planned for Friday.

Al-Wefaq condemned the interior ministry order as breaching international law and human rights. The authorities had rejected a Wefaq request for a rally on Sunday evening at Akar, a village near the capital Manama where a bomb fatally wounded a policeman on October 18. The opposition movement then organised a licensed demonstration, but when people took to the streets, they chanted “Down with Hamad,” a reference to the king.

A full crackdown on the opposition would anger the US, Britain and other western allies that have stood by the Bahraini since last year’s unrest.

The US has important military links with Bahrain, which hosts the US Navy’s 5th Fleet, but it has also called for increased efforts at dialogue to ease the tensions.

Britain has repeatedly called on Bahrain to implement the recommendations of the Bahrain Independent Commission of Inquiry, which issued its report last year.

“I am concerned that the government of Bahrain has decided to ban all rallies and public gatherings until further notice,” said Alistair Burt, the UK foreign office minister. “We understand the government’s concerns about maintaining law and order, especially when faced with increasingly violent protests, but a blanket ban of this nature is excessive. Peaceful protest is a democratic right. I hope the Bahraini government will rescind this measure as quickly as possible. I also call on protesters to desist from violent protest. Violent acts should be condemned publicly by prominent members in society.”

Shias comprise about 70% of Bahrain’s 525,000 citizens, who claim they face systematic discrimination and gerrymandering of constituency boundaries.

The monarchy has made a series of concessions, including giving more powers to the elected parliament, but opposition groups say the reforms do little to loosen the ruling family’s hold on power. More than 50 people have been killed in Bahrain’s unrest since February 2011.