Romney Refuses To Comment On Plans To Eliminate FEMA, 14 Times 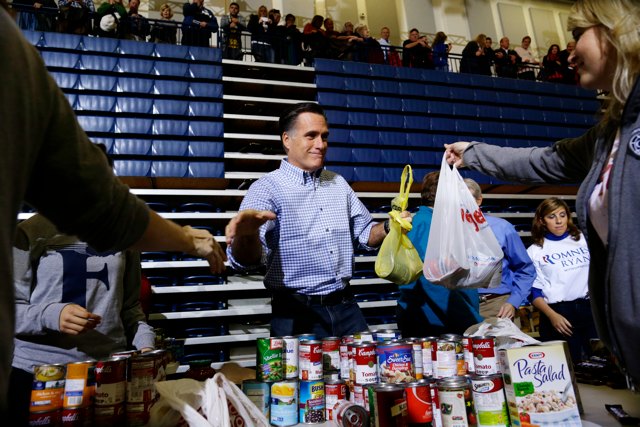 Romney at a “relief” rally this morning (AP).

Hurricane Sandy is not turning into a political windfall for Republican presidential candidate Mitt Romney. Not only did Romney’s buddy New Jersey Governor Chris Christie go and call President Obama a “great leader” for his storm response but now some of the former Massachusetts governor’s previous statements about disaster relief are coming back to bite him. Not that he wants to talk about that when there is politicking to do.

As the Times eloquently points out today, the Federal Emergency Management Agency (FEMA) has been pretty important to our response to Hurricane Sandy. And what do you know, last year Romney made it very clear he didn’t think FEMA needed to exist. Would he get rid of it?

Here’s the video if you prefer:

So does Romney still feel that way? Who knows! He certainly wasn’t willing to talk about it today at a press briefing:

“Governor, are you going to see some storm damage?” one reporter asked.
Several others again asked Romney whether he would eliminate FEMA.
“Governor, you’ve been asked 14 times. Why are you refusing to answer the question?” one asked.
Romney ignored the reporters’ queries and continued loading up the truck. Earlier, during the event, he ignored similar queries.

Still, campaign officials insist he would not abolish FEMA if he became president.

No wonder when Chris Christie was asked about the chances for the election next week all he had to say on the topic was, “I don’t give a damn about Election Day. It doesn’t matter a lick to me at the moment. I’ve got bigger fish to fry and so do the people of New Jersey.”

Anyway, FEMA isn’t even the only thing the Romney campaign is under fire for today. Some are angrily questioning his team’s choice to screen campaign
advertisements to attendees of a “storm relief event.” Even his team isn’t really helping: