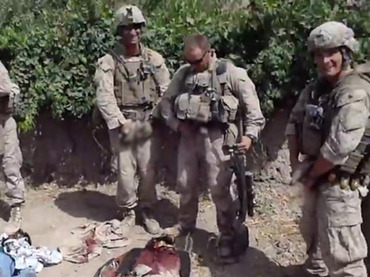 A still image taken January 11, 2012 from an undated YouTube video shows what is believed to be U.S. Marines urinating on the bodies of dead Taliban soldiers in Afghanistan. (Reuters/YouTube)

A US Marine has had his rank reduced and been fined $500 fine for urinating on corpses of Taliban fighters in Afghanistan after pleading guilty at a special court martial in Camp Lejeune, North Carolina.

Footage of the incident, which occurred during a counter-insurgency operation in Afghanistan’s Helmand Province in July 2011, quickly went viral after it was uploaded to the Internet in January this year, sparking world-wide outrage.

The video shows four Marines in uniform laughing and joking while urinating on the bodies of three bearded men. One of the men says, “Have a nice day, buddy.” A caption identifies them as members of Scout Sniper Team 4.

US Defense Secretary Leon Panetta called the Marines’ behaviour “utterly deplorable” and promised an investigation, while Afghan President Hamid Karzai condemned the actions as “inhuman”. US Secretary of State Hillary Clinton also promised that the Marines would be punished after expressing her “total dismay”.

However, following an eight-month investigation, the Marine Corps decided on undisclosed administrative punishments for three of the Marines in August. All three had pleaded guilty to misconduct charges, including “wrongly video-recording” the incident, failing to report it, as well as posing next to the bodies.

The relatively lenient punishment will only spark more violence against the American troops in Afghanistan, says Ann Wright, a retired US army colonel and a US diplomat.

“There will probably be a violent reaction to the news that this is what the punishment is and retaliation on US government officials should be predicted,“ she told RT.

Their records will also be permanently marked, preventing them from any future promotions or re-enlistments.

Chamblin waived his right to a jury and pleaded guilty to the charges, for which he was sentenced to 30 days’ imprisonment, a reduction in rank by three grades and a $2,000 fine. However, the initial sentence will be reduced by a marine general to a $500 fine and one grade reduction in rank, based on a plea agreement.

Wright argues that the behaviour of both the marines and the court which judged them will enrage the local population in the war-torn country. It also indirectly sanctions similar behaviour by other US troops in other combat zones, “where you have sergeant Bales killing sixteen Afghans, you have this incident of marines urinating on the bodies of the Taliban and you have the issue of Karan being burned on a military base. Afghanis are outraged about these things.”