The ‘war on terror’ – by design – can never end 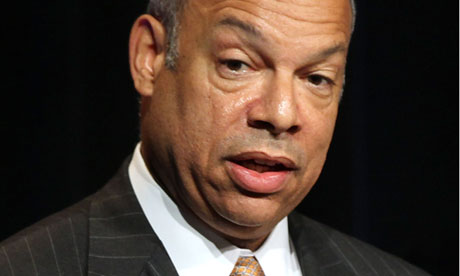 As the Pentagon’s former top lawyer urges that the war be viewed as finite, the US moves in the opposite direction

Last month, outgoing pentagon general counsel Jeh Johnson gave a speech at the Oxford Union and said that the War on Terror must, at some point, come to an end:

“Now that efforts by the US military against al-Qaida are in their 12th year, we must also ask ourselves: How will this conflict end? . . . . ‘War’ must be regarded as a finite, extraordinary and unnatural state of affairs. We must not accept the current conflict, and all that it entails, as the ‘new normal.’ Peace must be regarded as the norm toward which the human race continually strives. . . .

“There will come a tipping point at which so many of the leaders and operatives of al-Qaida and its affiliates have been killed or captured, and the group is no longer able to attempt or launch a strategic attack against the United States, that al-Qaida will be effectively destroyed.”

On Thursday night, MSNBC’s Rachel Maddow interviewed Johnson, and before doing so, she opined as follows:

It is precisely the intrinsic endlessness of this so-called “war” that is its most corrupting and menacing attribute, for the reasons Maddow explained. But despite the happy talk from Johnson, it is not ending soon. By its very terms, it cannot. And all one has to do is look at the words and actions of the Obama administration to know this.

In October, the Washington Post’s Greg Miller reported that the administration was instituting a “disposition matrix” to determine how terrorism suspects will be disposed of, all based on this fact: “among senior Obama administration officials, there is broad consensus that such operations are likely to be extended at least another decade.” As Miller puts it: “That timeline suggests that the United States has reached only the midpoint of what was once known as the global war on terrorism.”

The polices adopted by the Obama administration just over the last couple of years leave no doubt that they are accelerating, not winding down, the war apparatus that has been relentlessly strengthened over the last decade. In the name of the War on Terror, the current president has diluted decades-old Miranda warnings; codified a new scheme of indefinite detention on US soil; plotted to relocate Guantanamo to Illinois; increased secrecy, repression and release-restrictions at the camp; minted a new theory of presidential assassination powers even for US citizens; renewed the Bush/Cheney warrantless eavesdropping framework for another five years, as well as the Patriot Act, without a single reform; and just signed into law all new restrictions on the release of indefinitely held detainees.

Does that sound to you like a government anticipating the end of the War on Terror any time soon? Or does it sound like one working feverishly to make their terrorism-justified powers of detention, surveillance, killing and secrecy permanent? About all of this, the ACLU’s Executive Director, Anthony Romero, provided the answer on Thursday: “President Obama has utterly failed the first test of his second term, even before inauguration day. His signature means indefinite detention without charge or trial, as well as the illegal military commissions, will be extended.”

There’s a good reason US officials are assuming the “War on Terror” will persist indefinitely: namely, their actions ensure that this occurs. The New York Times’ Matthew Rosenberg this morning examines what the US government seems to regard as the strange phenomenon of Afghan soldiers attacking US troops with increasing frequency, and in doing so, discovers a shocking reality: people end up disliking those who occupy and bomb their country:

“Such insider attacks, by Afghan security forces on their Western allies, became ‘the signature violence of 2012’, in the words of one former American official. The surge in attacks has provided the clearest sign yet that Afghan resentment of foreigners is becoming unmanageable, and American officials have expressed worries about its disruptive effects on the training mission that is the core of the American withdrawal plan for 2014. . . .

“But behind it all, many senior coalition and Afghan officials are now concluding that after nearly 12 years of war, the view of foreigners held by many Afghans has come to mirror that of the Taliban. Hope has turned into hatred, and some will find a reason to act on those feelings.

“‘A great percentage of the insider attacks have the enemy narrative — the narrative that the infidels have to be driven out — somewhere inside of them, but they aren’t directed by the enemy,’ said a senior coalition officer, who asked not to be identified because of Afghan and American sensitivities about the attacks.”

In other words, more than a decade of occupying and brutalizing that country has turned large swaths of the population into the “Taliban”, to the extent that the “Taliban” means: Afghans willing to use violence to force the US and its allies out of their country. As always, the US – through the very policies of aggression and militarism justified in the name of terrorism – is creating the very “terrorists” those polices are supposedly designed to combat. It’s a pure and perfect system of self-perpetuation.

Exactly the same thing is happening in Yemen, where nothing is more effective at driving Yemenis into the arms of al-Qaida than the rapidly escalated drone attacks under Obama. This morning, the Times reported that US air strikes in Yemen are carried out in close cooperation with the air force of Saudi Arabia, which will only exacerbate that problem. Indeed, virtually every person accused of plotting to target the US with terrorist attacks in last several years has expressly cited increasing US violence, aggression and militarism in the Muslim world as the cause.

There’s no question that this “war” will continue indefinitely. There is no question that US actions are the cause of that, the gasoline that fuels the fire. The only question – and it’s becoming less of a question for me all the time – is whether this endless war is the intended result of US actions or just an unwanted miscalculation.

It’s increasingly hard to make the case that it’s the latter. The US has long known, and its own studies have emphatically concluded, that “terrorism” is motivated not by a “hatred of our freedoms” but by US policy and aggression in the Muslim world. This causal connection is not news to the US government. Despite this – or, more accurately, because of it – they continue with these policies.

One of the most difficult endeavors is to divine the motives of other people (divining our own motives is difficult enough). That becomes even more difficult when attempting to discern the motives not of a single actor but a collection of individuals with different motives and interests (“the US government”).

But what one can say for certain is that there is zero reason for US officials to want an end to the war on terror, and numerous and significant reasons why they would want it to continue. It’s always been the case that the power of political officials is at its greatest, its most unrestrained, in a state of war. Cicero, two thousand years ago, warned that “In times of war, the law falls silent” (Inter arma enim silent leges). John Jay, in Federalist No. 4, warned that as a result of that truth, “nations in general will make war whenever they have a prospect of getting anything by it . . . for the purposes and objects merely personal, such as thirst for military glory, revenge for personal affronts, ambition, or private compacts to aggrandize or support their particular families or partisans.”

If you were a US leader, or an official of the National Security State, or a beneficiary of the private military and surveillance industries, why would you possibly want the war on terror to end? That would be the worst thing that could happen. It’s that war that generates limitless power, impenetrable secrecy, an unquestioning citizenry, and massive profit.

Just this week, a federal judge ruled that the Obama administration need not respond to the New York Times and the ACLU’s mere request to disclose the government’s legal rationale for why the President believes he can target US citizens for assassination without due process. Even while recognizing how perverse her own ruling was – “The Alice-in-Wonderland nature of this pronouncement is not lost on me” and it imposes “a veritable Catch-22” – the federal judge nonetheless explained that federal courts have constructed such a protective shield around the US government in the name of terrorism that it amounts to an unfettered license to violate even the most basic rights: “I can find no way around the thicket of laws and precedents that effectively allow the executive branch of our government to proclaim as perfectly lawful certain actions that seem on their face incompatible with our Constitution and laws while keeping the reasons for their conclusion a secret” (emphasis added).

Why would anyone in the US government or its owners have any interest in putting an end to this sham bonanza of power and profit called “the war on terror”? Johnson is right that there must be an end to this war imminently, and Maddow is right that the failure to do so will render all the due-process-free and lawless killing and imprisoning and invading and bombing morally indefensible and historically unforgivable.

But the notion that the US government is even entertaining putting an end to any of this is a pipe dream, and the belief that they even want to is fantasy. They’re preparing for more endless war; their actions are fueling that war; and they continue to reap untold benefits from its continuation. Only outside compulsion, from citizens, can make an end to all of this possible.

Like Loading...
‹ Endless ‘debate over two-state solution’ is cover for the real story, annexation of West Bank
Amnesty International’s latest arms trade campaign is colonialism with a kindly face ›