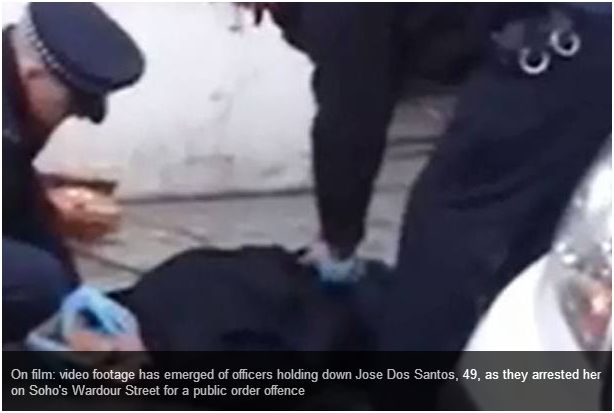 Police officers allegedly ripped a wig from a transgender woman’s head and emptied the contents of her handbag onto the street.

Video footage has emerged of officers holding down Jose Dos Santos, 49, as they arrested her on Soho’s Wardour Street for a public order offence.

Gay Star News spoke to two people who claim to have witnessed the incident.

They said: “The victim then had her wig ripped from her head, her handbag and purse literally emptied out on the road, so her personal belongings were damaged and scattered around her.

In further allegations they added: “ Police officers mocked her for her dress and having feminine items in her handbag shouting at her: ‘You’re not normal. We’ll let you get you up in a few minutes but you need to act like a normal human being.’”

Speaking to The Independent, the Metropolitan Police said a complaint had been received and that the incident was being investigated by the Directorate of Professional Standards, the body that looks into the conduct of officers when allegations are made against them.

Dos Santos was charged under Section 5 of the Public Order Act and appeared by virtual link in Westminster Magistrates Court yesterday where she was bailed until May.

According to those present, officers arrested the woman after she vomited outside the Le Pain Quotidien restaurant shortly after 3pm.

A crowd gathered and people filmed the incident on their shot video of the arrest on their phones.

A video uploaded to YouTube shows Dos Santos being held on the floor.

A police officer is heard to say: “If you keep putting your legs up I’m going to keep standing on them. Just relax”.

Like Loading...
‹ British have invaded nine out of ten countries – so look out Luxembourg
The dirty dozen: Israel’s racist ringleaders ›