Force Col. Michael W. Butler, 53, from Rembert, South Carolina, who was killed by a rocket-propelled grenade in Iraq while working as a private contractor, is drawn by horses to the gravesite during funeral services 22 August 2007 at Arlington National Cemetery. 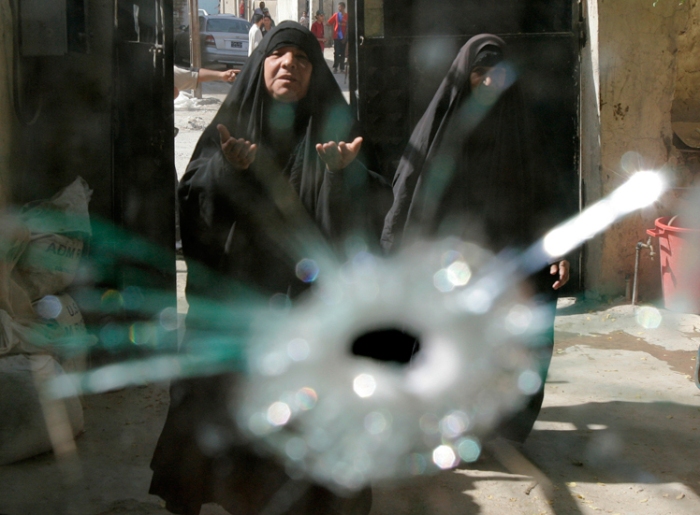 Two old women dressed in black walking towards a window pierced by a bullet in the al-Amin al-Thaniyah neighborhood of Baghdad on July 12, 2007 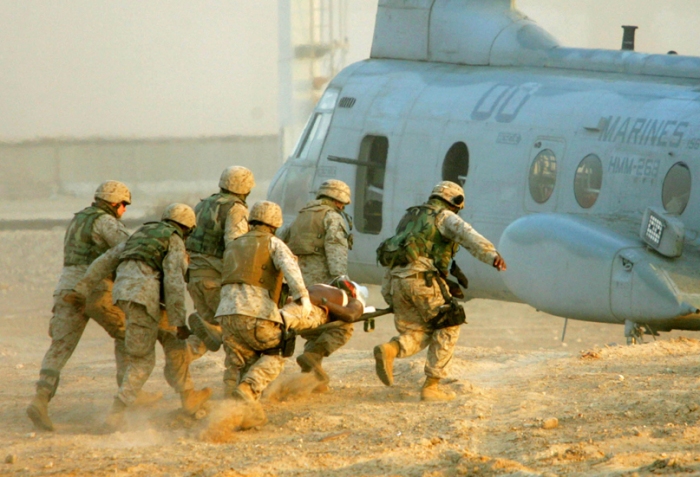 U.S. Marines carry an injured colleague to a helicopter near the city of Falluja, November 10, 2004 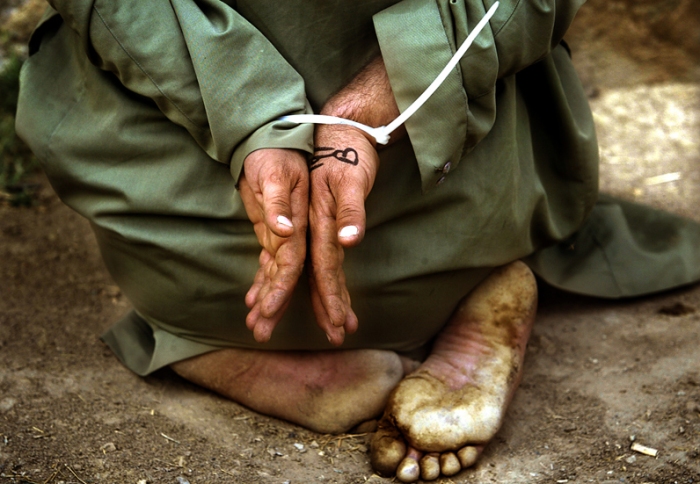 A barefoot Iraqi man is detained by soldiers of U.S. Army’s 4th Infantry Division (Task Forse Ironhorse) during a raid in the suburb of Baquba November 9, 2003

US Marines kick in a door while securing a building next to the main hospital in central Baghdad April 15, 2003, which will be used as a temporary Iraqi police headquarters 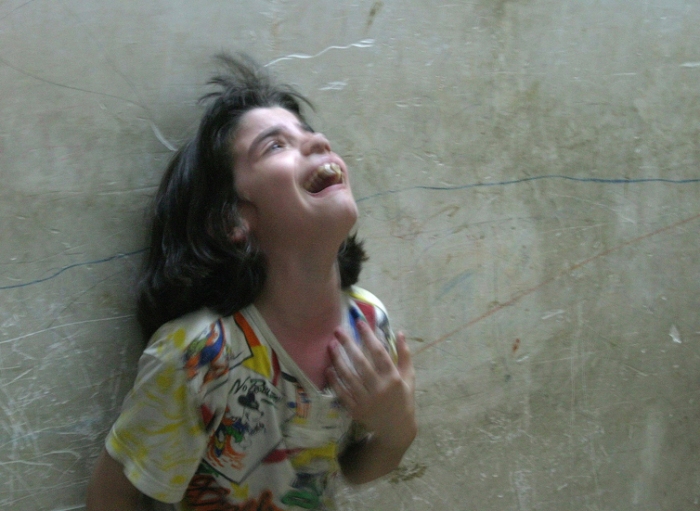 Mays, a young Iraqi Shi’ite girl, cries after a mortar shell which landed outside the family’s home in a Najaf residential area injured her uncle August 18, 2004

An Iraqi woman tries to explain that she has nothing to do with illegal fuel as soldiers from the 2nd battalion, 32nd Field Artillery brigade patrol search for illegal fuel sellers in Baghdad August 6, 2007 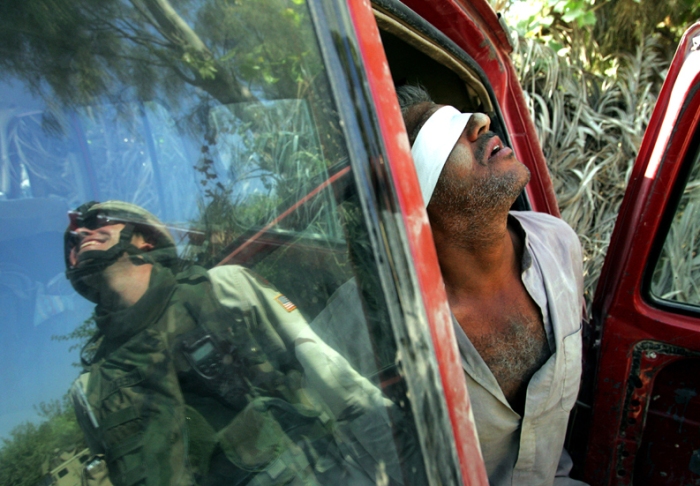 An Iraqi man suspected of having explosives in his car is held after being arrested by the U.S army near Baquba, Iraq, October 15, 2005 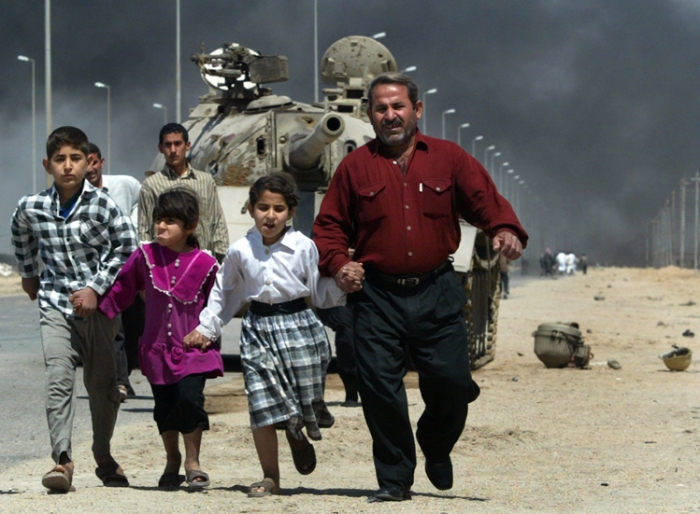 A family flees past a destroyed Iraqi T-55 tank after a mortar attack on British Army positions in the southern city of Basra March 28, 2003

British soldier jumps from a burning tank which was set ablaze after a shooting incident in the southern Iraqi city of Basra September 19, 2005

A row of U.S. Army helmets are perched on M-16 rifles during a memorial at Al Asad air base November 6, 2003 for the 15 victims of a Chinook helicopter which was shot down by insurgents on the weekend

An Iraqi man holds the body of a boy after a car bomb explosion at a market in the neighbourhood known as New Baghdad, southeast of Baghdad, February 18, 2007 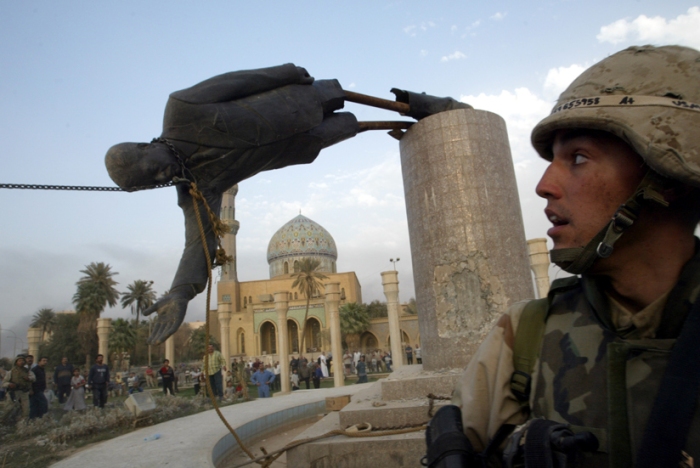 A U.S.soldier of the 1st Battalion (22nd regiment) of the fourth Division of the U.S. army stands guard next to detained Iraqis caught during a raid in Tikrit, September 10, 2003

An Iraqi baby lies in a cradle while a woman argues with U.S. soldiers of 1/8 Bravo Company searching for weapons, explosives and information about militants in the area during a foot patrol in a neighbourhood of Mosul June 26, 2008

Coffins of U.S. military personnel are prepared to be offloaded at Dover Air Force Base in Dover, Delaware in this undated photo

An Iraqi girl holds her sister as she waits for her mother (R) to bring over food bought in Basra, March 29, 2003