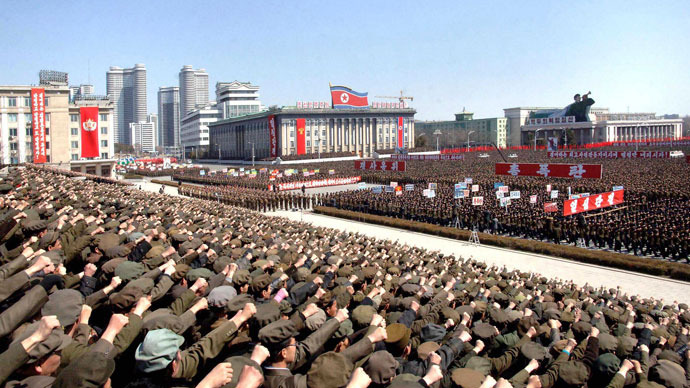 North Koreans including soldiers attend a rally in support of North Korean leader Kim Jong-un’s order to put its missile units on standby in preparation for a possible war against the U.S. and South Korea, in Pyongyang March 29, 2013.(Reuters / KCNA)

North Korea has entered a “state of war” against its Southern neighbor, stating that from now on any issues between the two countries will be resolved in a “wartime manner.”

“From this time on, the North-South relations will be entering the state of war and all issues raised between the North and the South will be handled accordingly,” a special statement by the country’s top military command reads, according to the KCNA state news agency.

However, technically, the two Koreas are still in state of war since a peace treaty after the 1950-53 conflict had never been signed.

Both North Korea and the US bear responsibility for the recent substantial escalation of tensions, Lavrov said on Friday, calling on “all sides not to flex their military muscle.”

“We are concerned that alongside the adequate, collective reaction of the UN Security Council, unilateral action is being taken around North Korea that is increasing military activity,” Lavrov added, apparently referring to US plans to boost missile defense against the North, the joint US-South Korean contingency plan in the event of an attack as well as their recent military drills.

In a noteworthy contrast to all the previous war games, this time American B-2 bombers flew over 10,000 kilometers to stage a mock bombing of Korean soil, in a move that US officials confirmed to be unprecedented.

“The situation could simply get out of control,” Sergey Lavrov told journalists on Friday, calling for a resumption of a six-party discussion of North Korea’s nuclear arsenal within the framework of country’s international obligations. 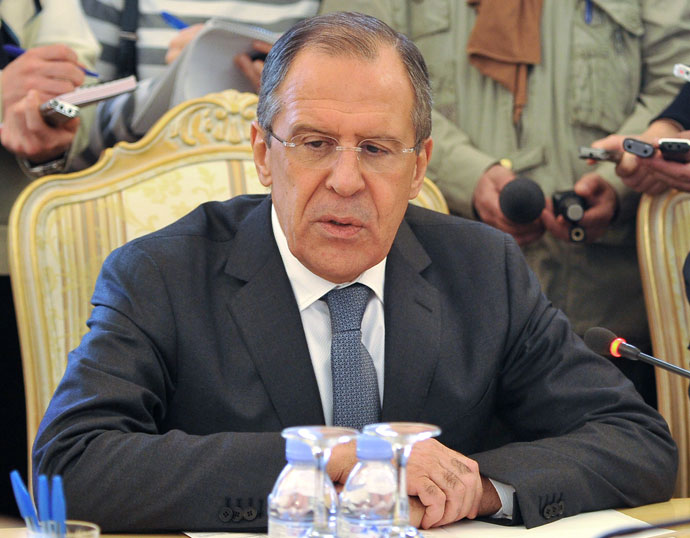 While N. Korea has firmly pledged to “settle accounts with the US imperialists” and “mercilessly strike the US mainland, their stronghold, their military bases” in case of any further provocations, US officials seemingly do not consider the threat to be as real as the democratic republic is trying to present it to be.

The threats towards the US are only hurting North Korea itself as well as its people, White House spokesman Josh Earnest said on Friday.

“The bellicose rhetoric emanating from North Korea only deepens that nation’s isolation,” Earnest said, adding that North’s unconditional renouncement of nuclear arms is the only clear path to resolve the situation.

Despite all the tensions, the United States is capable of defending its interests in the region, Earnest added.

Military experts agree that North Korea is at least several years from building a nuclear warhead or a missile capable of reaching the mainland US, which makes the threats, at this point, groundless.

However, a detailed plan of a nuclear strike on the US mainland can be clearly seen behind the North Korean leader on photos published in national newspaper. Such a demonstration of nuclear capabilities is likely aimed at an internal audience, in support of the idea of “sweeping away the US aggressors.” 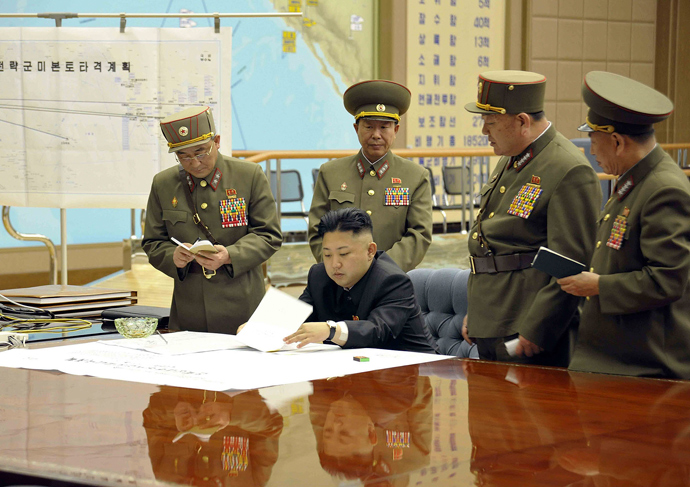 Nevertheless, US Defense Secretary Chuck Hagel admitted on Thursday that “every provocative, bellicose word and action” of Kim Jong-un has to be taken seriously.

Earlier this month Washington decided to address North Korea’s faster-than-anticipated progress in nuclear weapons development, announcing that the US will have 14 missile interceptors up and running by 2017, even abandoning a key part of its Eastern European missile defense plan in order to curb the threat from North Korea.

Like Loading...
‹ US sends nuclear-capable B-2 bombers to S. Korea
U.S. B-52 Bombers Simulated Raids over North Korea During Military Exercises ›