China has started mobilizing military forces around the Korean peninsula in response to rising tensions that follow recent threats by North Korea to launch missile attacks against its southern neighbor and the United States.

According to US officials, Pyongyang’s declaration of a ‘state of war’ against South Korea has led to the Chinese People’s Liberation Army (PLA) to increase its military presence on the border with the North. The officials say the process has been going on since mid-March, and includes troop movements and readying fighter jets. The PLA is now at ‘Level One’ readiness, its highest.

Chinese forces, including tanks and armored personnel carriers, have been spotted in the city of Ji’an and near the Yalu River, which splits China and North Korea. Other border regions were also reportedly being patrolled by planes.

China has also been conducting live-firing naval exercises in the Yellow Sea, scheduled to end on Monday. The move is widely viewed as open support for North Korea, which continues to show extreme opposition to the US-South Korean military drills that are to last until May.

The news comes as the US deployed its USS Fitzgerald destroyer off the coast of North Korea, adding to its Sunday deployment of F-22 fighter jets to take part in the drills with the friendly South, which has further served to heighten tensions on the peninsula.

Meanwhile, North Korea has been mobilizing its short and medium-range missile arsenal, according to analyses of satellite imagery. Officials say Pyongyang is set to test its new KN-08 medium-range mobile missile; they say preparations have been spotted in the past. Pyongyang claims that since March 26, its forces have been placed on their highest possible status of alert.

Although officials believe Pyongyang will not provoke Seoul during the war games, they also fear that a miscalculation by South Korea could lead to all-out war, following its promise of retaliation against the North, should it launch its missiles first. 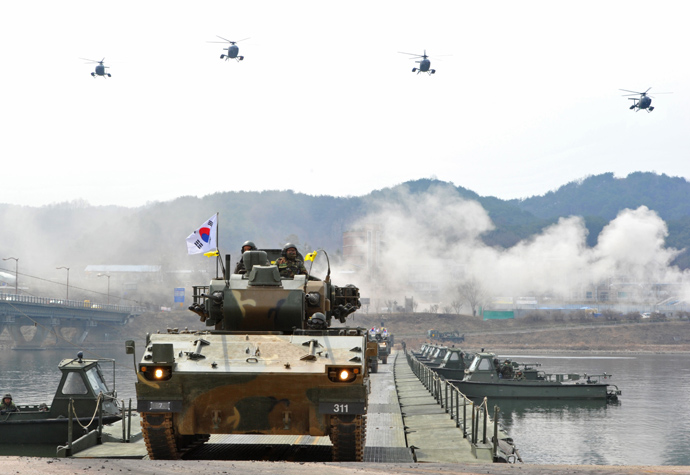 South Korean anti-aircraft armoured vehicles move over a temporary bridge during a river-crossing military drill in Hwacheon near the border with North Korea on April 1, 2013 (AFP Photo / KIim Jae-Hwan)

North Korea and China have maintained a long-standing defense treaty under which Beijing is to come to Pyongyang’s aid in the event of an attack. The last time this was put into practice was during the Korean War, when tens of thousands of Chinese volunteer forces were deployed on the Korean Peninsula. The relationship between the two countries is often referred to as being “as close as lips and teeth” by Chinese military spokesmen.

Despite the heated tensions leading to an apparent disruption in trade and commerce between China and North Korea, the two are already making future plans to bolster their economic ties. March 27 saw the announcement of a new high-speed railway, as well as a special highway passenger line.

Still, many in Chinese circles have shown displeasure at Pyongyang’s seemingly aggressive relationship with Seoul and Washington. A Chinese official, speaking to Reuters on condition of anonymity, has testified that US presence in the region is a helpful restraint against an unpredictable Kim Jong-un, which many believe to be the real reason Beijing has not been strong in its criticism of the amassing of US forces in the region.

Furthermore, Chinese websites and blogs could sometimes be found openly bashing the North Korean leader for an apparent mishandling of the situation in the region, playing diplomatic games amid chronic food shortages in his country. An editor at the country’s Study Times newspaper was recently suspended for openly criticizing China for abandoning North Korea. 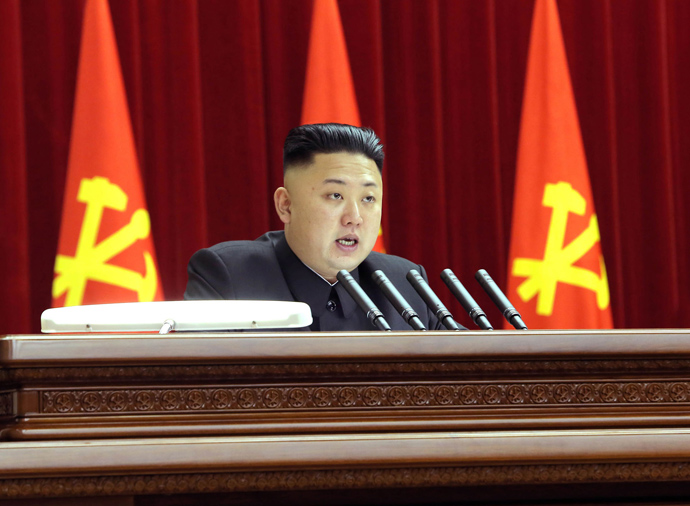 Expert opinion differs on what China’s exact position is in the unfolding regional crisis.

US officials claim the China’s main fear is a collapse of order in North Korea, which would lead to a large-scale refugee flow into China.

Another possible reason for China to worry is advanced by journalist James Corbett, host of the Corbett Report, who believes that foreign military presence in the region is just as unnerving to China as it is to Pyongyang. He discussed this in the light of the latest war drills.

“I think that this has the possibility of ratcheting things up to the point where tensions might actually spill over as a result of this, and we saw that recently with the deployment of B-2 nuclear armed bombers in South Korea which is not only, I think, worrying to Pyongyang, but also to China, to have nuclear bombers that close to the peninsula there, on China’s southern border. I think that China wouldn’t be pleased with that either, so this is quite an escalation that’s taking place.”

Others believe openly that the US strategy is geared not towards the destabilization of North Korea, but that of China. Li Jie, an expert with a Chinese navy research institution, has told Reuters that “the ultimate strategic aim is to contain and blockade China, to distract China’s attention and slow its development. What the US is most worried about is the further development of China’s economy and military strength.”

Retired Major General Luo Yuan, who is one of China’s foremost military authorities, believes, however that “once the joint US-South Korean exercises have finished and with birthday celebrations for (late founder of North Korea) Kim Il-sung imminent, the temperature will gradually cool and get back to the status quo of no war, no unification.”

While it has been urging calm and peace in the region, Beijing has been very obliging at the UN Security Council, when it helped push through the latest round of sanctions against North Korea in March, following its third nuclear test the previous month. Despite being Pyongyang’s greatest ally in the region, some experts believe this is a sign of Beijing’s growing impatience. American diplomat Christopher R. Hill, who helped under the Bush administration to negotiate a deal for the dismantling of North Korea’s nuclear facilities (which didn’t last), says that the Chinese strategy is“not about the words, it is about the music.”

The resolution came hours after North Korea, angered at both the US-South Korean war games, and at the proposed UN plan, threatened pre-emptive nuclear action against the South and US military bases in the region.

This latest standoff between North and South Korea and the US is credited to have started on February 12, when Pyongyang supposedly performed its latest underground nuclear weapons test. Just this weekend, North Korea vowed to boost its nuclear arsenal, calling it a “treasure of a reunified country”which it would never trade for anything, even “billions of dollars” worth of aid.