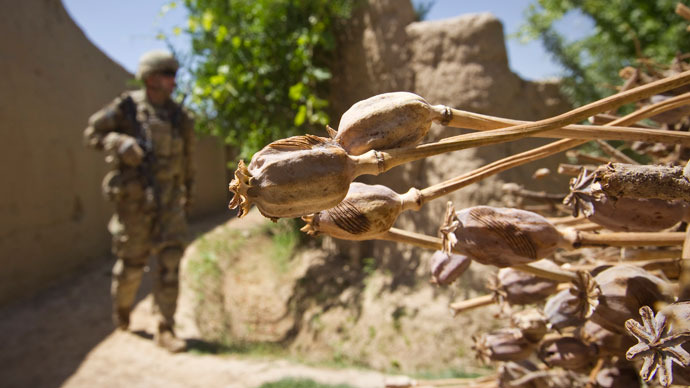 Heroin production in Afghanistan increased 40 times since NATO began its ‘War on Terror’ in 2001, the head of Russia’s Federal Drug Control Service stated, adding that more than 1million people have died from Afghan heroin since then.

“Afghan heroin has killed more than 1 million people worldwide since the ‘Operation Enduring Freedom’ began and over a trillion dollars has been invested into transnational organized crime from drug sales,”Viktor Ivanov said at the conference on the drug situation in Afghanistan.

Ivanov stressed that the main factor of instability in the war-torn country remains the prosperous heroin industry.

“Any impartial observer must admit the sad fact that the international community has failed to curb heroin production in Afghanistan since the start of NATO’s operation.”

According to his presentation at UN’s 56th session of the Commission on Narcotic Drugs in Vienna on March 11, opium growth has increased by 18 per cent from 131,000 hectares to 154,000.

As the situation in Afghanistan changed with NATO withdrawing its troops, Russia along with Afghanistan and the international community must face the new reality and develop an efficient strategy to deal with the heroin problem, explained Ivanov.

Opium production has been central to Afghanistan’s economy ever since US and NATO forces invaded in October 2001. Just before the invasion Taliban had implemented a ban on poppy growing, declaring it to be anti-Islam, which lowered the overall production. But after the West’s involvement, production resumed and now the country produces some 90 per cent of the world’s opium, the great bulk of which ends up on the streets of Europe and Russia.

US and NATO officials have been stuck in a Catch-22 fight against Afghan opium. At the UN Commission on Narcotic Drugs in Vienna in March, Ivanov stated that on the one hand, they are attempting to win the hearts and minds of the local population, which increasingly depends on the cultivation of opium poppy for their livelihood. On the other, they need to cut off finances to the Taliban insurgency, which is fueled by the sale of opium poppy to foreign markets.

About 15 per cent of Afghanistan’s Gross National Product depends on drug-related exports, which amounts business worth US$2.4 billion a year, according to UN 2012 figures.

Spokesman for Afghanistan’s Counternarcotic Ministry Qayum Samir told Radio Free Europe on Monday that 157,000 hectares are being planted with poppies this spring, which is up by an estimated 3,000 hectares since last year. Samir argued that lack of security, lack of governance and widespread poverty are the reasons behind the increase in heroin production.

Moscow believes the simplest solutions are the most effective ones, and eradicating the country’s poppy fields is the key to solving the problem, underlined Viktor Ivanov.

But there is a big difference between how Russia and the US see the solution to the problem.

“Metaphorically speaking, instead of destroying the machine-gun nest, they suggest catching bullets flying from the machine-gun,” Ivanov explained. “We suggest eradicating the narcotic plants altogether. As long as there are opium poppy fields, there will be trafficking.”

However, based on the US and NATO strategy, there seems no intention to get rid of all Afghan poppy fields, which is an inconsistency in the Western approach.

“The US together with the Colombian government eradicates 200,000 hectares of coca bushes a year. In Afghanistan, only 2,000 hectares of poppy fields are being eradicated – one 100th of that amount,” Ivanov pointed out.

And alongside the refusal to get rid of the poppies, there is the apparent interest of international banks in “dirty” money. Narcotics have nearly as large a share in total world trade as oil and gas, argued Ivanov in his presentation to UN.

The head of Russia’s drug enforcement suggested US and European banks tacitly welcome and “encourage” the inflow of drug money, he explained.

Gil Kerlikovske, director of the Office of National Drug Control Policy in the executive office of the US president, told RT that “We can intercept and seize tons of narcotics, we can make arrests of traffickers, but we really need to choke off the funds that supply this.”

Currently, Russia supports solutions proposing to improve social and institutional development in Afghanistan and discussing the problem at the international level. 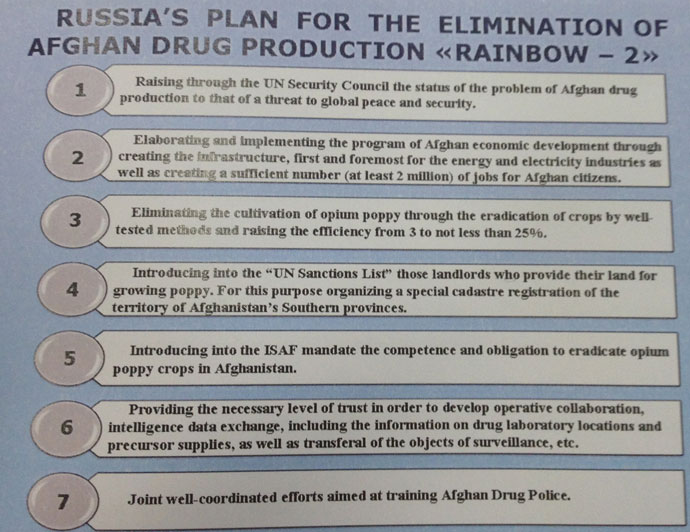