Afghan villagers sit near the bodies of children who they said were killed during an air strike in Kunar province April 7, 2013. (Reuters)

A NATO airstrike has killed 11 children and one woman in the East of Afghanistan, report local officials. A house collapsed during the attack, causing the casualties and leaving six women injured.

The civilians were killed during a joint Afghan-NATO operation late on Saturday night in the Shigal district of Kunar province, which borders Pakistan.

“Eleven children and a woman were killed when an air strike hit their houses,” provincial spokesman Wasifullah Wasifi said on Sunday.

A Reuters journalist saw the bodies of 11 children being carried by their families and other villagers. They were on their way to the office of Mohammad Zahir Safai, the Shigal district chief, to register their protest.

The body of the female victim was not seen, as women’s bodies are not displayed in accordance of custom. However, local residents told the journalist of her death.

Six militants – two of them senior Taliban leaders – and an American civilian adviser to the Afghan intelligence agency were also killed in the operation.

A spokesman for the NATO-led security mission in Afghanistan said they were aware of reports regarding civilian casualties and were assessing the incident, Reuters reports.

The spokesman, Captain Luca Carniel, said the International Security Assistance Force (ISAF) had provided “air support” during the operation, but that no ISAF troops were on the ground.

The airstrike had been called in by NATO forces, and not their Afghan allies, he continued.

Earlier on Saturday, five Americans, including three US soldiers, a young diplomat and a US Defense Department contractor were also killed when a car bomb targeted their convoy in the southern province of Zabul.

Provincial governor Mohammad Ashraf Nasery was in the convoy, but was not injured in the attack,  local and NATO officials said.

“Our American officials and their Afghan colleagues were on their way to donate books to students in a school in Qalat, the province’s capital, when they were struck by this despicable attack,” US Secretary of State John Kerry said in a statement.

Four other US diplomats were wounded, one critically, Kerry continued.

Recently, Afghan security forces have been taking the lead in operations against Taliban insurgency in preparation for the final withdrawal of alliance forces in 2014.

US Special Forces were forced to withdraw from two Afghan provinces back in February by the government after a number of reports of “harassing, torturing and murdering innocent civilians.” 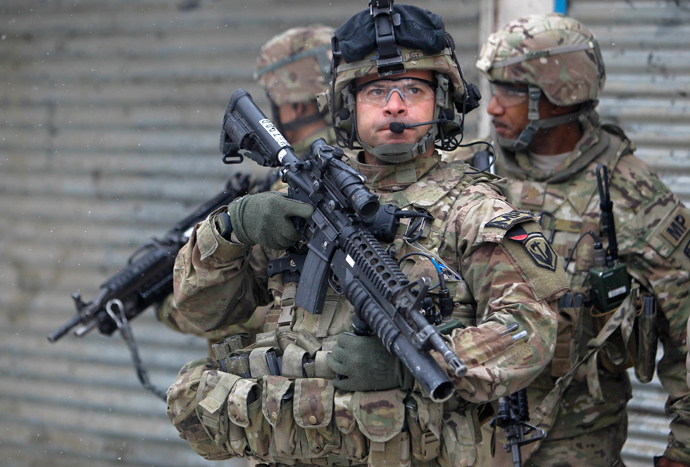 Afghanistan’s President Hamid Karzai slammed the US forces for fueling “insecurity and instability” in troubled provinces located close to Kabul.

But despite President Karzai’s often contentious relationship with ISAF forces over “collateral damage”, NATO will continue to launch airstrikes when it is tactically beneficial, political analyst Habib Hakimi told RT.

Errant NATO airstrikes have put Afghan President Karzai in a particularly precarious position, as he both owes his power to US-led forces but also is delegitimized as a result of their actions, RT’s Gayane Chichakyan reports.

“These airstrikes come amid repeated pleas of the Afghan government of President Karzai to stop killing civilians. In Karzai’s words, they fuel insecurity and instability, they further alienate Afghans from their government, which many Afghans see as a puppet government,” she said.

“President Karzai, though he does owe his power to allied forces, to Washington specifically, he clearly understands that those civilian casualties steer more violence in Afghanistan and undermine his government even further,” Chichakyan continued.

News editor at Antiwar.com, Jason Ditz believes that in many cases, American airstrikes almost tend to have the exact opposite effect to what everyone desired, creating more problems for the Americans themselves.

“The long-term effects are the bigger deal in that civilians who had relatives killed in those incidents are more likely to support the Taliban. Fighting men who were maybe on the sideline are also more likely to join the Taliban after an incident like this… even airstrikes that kill militants tend to create more militants… And certainly, if you kill children, it’s going to leave a dramatically worse impact.”

Lawrence Davidson, Professor of Middle East History at West Chester University says that it is hard for Americans to understand why this war went on for 11 years and what they are still doing there now.

“From the American standpoint this war was never winnable – if winnable means the defeat of the Taliban or anti-foreign forces that passed by the name of the Taliban,” he told RT.

“We are not going to defeat the Taliban, which is  a multifaceted sort of operation. We are in a country that isn’t really unified. The central government really doesn’t have a lot of power throughout the country. And when we are done, my opinion is that it will rapidly disappear.”

Peace activist David Swanson blames US media coverage for  keeping Americans unaware of the real face of the war in Afghanistan, which he describes as “one-sided slaughter of helpless people.”

“Even the news articles about this strike which killed a greater number of people are dominated by paragraphs talking about another strike that killed Americans,” he told RT.

“The US deaths of course are always smaller numbers but they dominate the coverage. Americans are not aware of the extent to which this war is essentially a one-sided slaughter of helpless people who meant us no ill, and has been for over a decade.”

Like Loading...
‹ Why Would Anyone Celebrate the Death of Margaret Thatcher? Ask a Chilean
Missouri Man Arrested at Hospital for Refusing to leave Gay Partner ›