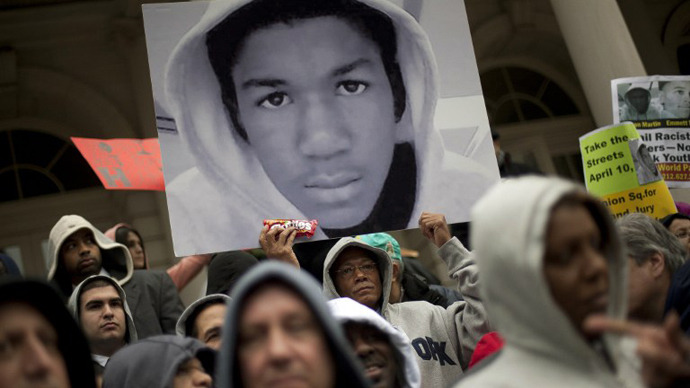 People along with New York City Council members attend a press conference to call for justice in the February 26 killing of 17-year-old Trayvon Martin in Sanford, Florida, on the steps of City Hall March 28, 2012 in New York City. (AFP Photo / Allison Joyce)

A Florida policeman has been fired for using photos of 17-year-old Trayvon Martin, shot and killed last year by a neighborhood watchman, for target practice. Martin’s family attorney condemned the act as “depraved.”

Sgt. Ron King of the Florida’s Port Canaveral Police Department allegedly offered paper shooting targets emblazoned with Martin’s image to two other officers, an internal review revealed. He was dismissed on Friday for possessing a number of such shooting targets.

Martin, 17, was gunned down by neighborhood watchman George Zimmerman in February 2012 in Sanford, about 50 miles northwest of Port Canaveral. Zimmerman claims that he shot the teenager in self-defense, and will stand trial for second-degree murder in June.

The Martin family says that Martin was unarmed when Zimmerman shot him, and had left his father’s house in the neighborhood to go to a convenience store.

“It is absolutely reprehensible that a high-ranking member of the Port Canaveral Police, sworn to protect and serve Floridians, would use the image of a dead child as target practice,” attorney Ben Crump said in a statement. “Such a deliberate and depraved indifference to this grieving family is unacceptable.”

In an unexpected move, Zimmerman waived his right to a ‘stand-your-ground’ in March of this year, relinquishing the opportunity to convince the judge pre-trial that he had acted in self-defense. Had he succeeded, his actions would have been deemed self-defense and the murder charges would have been dropped.

The stand-your-ground law allows Florida citizens to defend themselves with deadly force in public if they believe they are being threatened. Martin’s death sparked a wave of protest against the controversial law demanding that it be overturned. Under this legislation, Zimmerman initially managed to evade arrest.