Gay teens starved, tortured, killed at camp to turn them into “men” 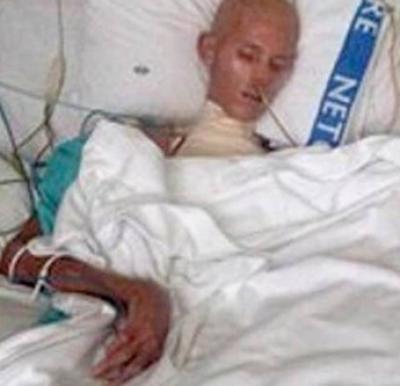 Game ranger course ‘general’ is on trial for murder, child abuse, neglect and allegedly forced teen to eat his own feces

Three ‘gay and effeminate’ teens have died after being starved, tortured and killed at a camp that promised to turn them into ‘men’.

A picture of Raymond Buys, 15, taken in April 2011 showed a skeletal, emaciated figure fighting for his life.

Just 10 weeks before, the teen’s parents signed him up to the Echo Wild Game Rangers training course in South Africa in perfect health.

In hospital, Buys was severely malnourished, dehydrated, his arm was broken in two places and there were burns and wounds all over his body. He lay in intensive care for four weeks until he died.

And now, the course ‘general’ Alex De Koker, 49, and employee Michael Erasmus, 20, are on trial for charges of murder, child abuse and neglect, along with two cases of assault with intent to do grievous bodily harm in relation to Buys’ death.

‘I sent my son on this course to make him a better man, to give him a better future,’ Buys’ mother told The Daily Telegraph. ‘I trusted Alex De Koker with his life.’

Last week, the Vereeniging District Court heard the testimony of a boy who had shared a tent with Buys, the Daily Maverick reports.

Gerhard Oostuizen, 19, claims Buys was chained to his bed every night, was refused permission to visit the toilet and on one occasion was forced to eat his own faeces.

He also said he would be beaten with planks, hosepipes and sticks when he failed to carry out manual labor tasks.

Oostuizen alleged further he saw De Koker tied Buys to a chair naked with his head covered in a pillowcase, and would electrocute him with a stun gun.

Gender activist Melanie Nathan has said the three young men were all perceived as ‘gay and clearly effeminate’.

In reference to ‘gay conversion camps’, Nathan writes: ‘With a little bit of digging [into the story], the gay reparative undertones start to emerge.’

Eric Calitz, 18, and Nicolaas Van Der Walt, 19, had both died after being enrolled at the Echo Wild Game Rangers camp four years earlier.

When Calitz requested to leave, De Koker reportedly told him he ‘wasn’t a moffie [gay] and he would make a man out of him’.

Calitz’s family was informed of his death via text message, saying he had died of a heart attack.

Afterwards, doctors said the cause of death was from a seizure, dehydration and found bleeding from the brain.

Van Der Walt was also claimed to have died from a heart attack, but doctors said he had appeared to have been choked with a seatbelt.

In 2009, De Koker was handed a suspended sentence over Calitz but escaped charges for the death of Van Der Walt, and the camp was allowed to continue.

Both De Koker and Erasmus have pleaded not guilty to the charges. The case continues.