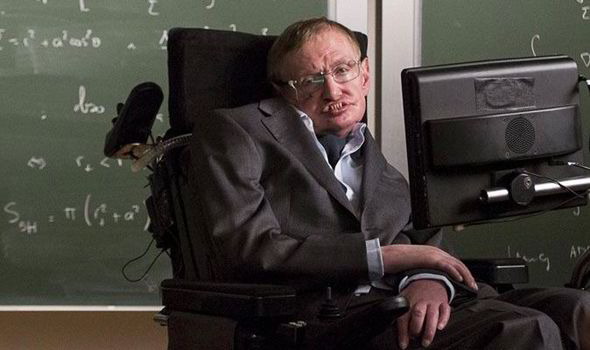 WORLD renowned theoretical physicist Stephen Hawking has faced a barrage of vile abuse today from people furious over his boycott of Israel.

The tirade of criticism came after the highly-respected Cambridge professor joined an academic embargo by refusing to attend a conference hosted by Israeli president Shimon Peres.

Professor Hawking was to take part in the Facing Tomorrow annual conference planned to be held in June but pulled out in protest at the treatment of Palestinians.

“Hawking has made an independent decision to respect the boycott, based upon his knowledge of Palestine, and on the unanimous advice of his own academic contacts there,” the British Committee for the Universities of Palestine said.

Reacting angrily to the Professor’s decision to join the academic boycott, pro-Israeli users voiced their outrage on social media sites.

“The anti-Semite Stephen Hawking can’t even wipe his own a**,” one sick user posted.

“He should die already!,” another said, while one user said Professor Hawking – widely considered one of the most intelligent men in the world today – is “also crippled in the head.”

“Someone should release the hand brake when he’s on a hill,” another vile post read.

Disgusted users condemned the revolting abuse, describing it as a “festival of hate.”

Professor Hawking’s move follows a boycott of Israel by the Teachers’ Union of Ireland and by the American members of the Association for Asian American Studies.

In 2009, Professor Hawking had also condemned the three-week onslaught on Gaza, saying the response to firing of rockets from the coastal strip was “plain out of proportion … The situation is like that of [Apartheid] South Africa before 1990 and cannot continue”.

The Israeli Ambassador to London, Daniel Taub, said: “The price that democratic societies all pay is freedom of speech, even for outrageous and objectionable opinions.

“This is why it is so important to encourage intelligent debate and discussion – and why it is such a shame that Professor Hawking will not be able to joining in such open dialogue at the President’s Conference.”