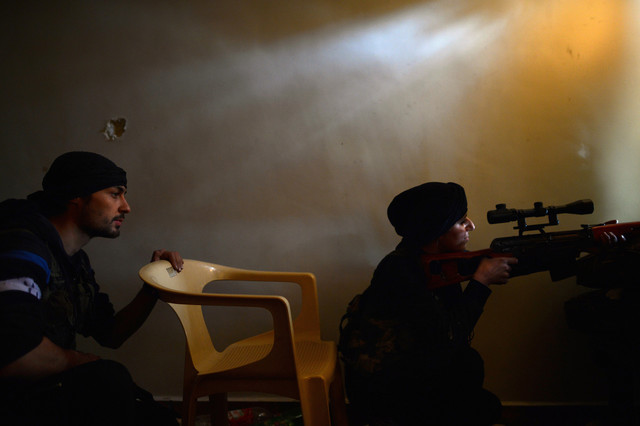 The Syrian uprising began with peaceful protests that evolved into a civil war after the government began attacking the demonstrators. Photographer: Dimitar Dilkoff/AFP via Getty Images

Communities inhabited by Shiite Muslims and President Bashar al-Assad’s Alawite minority will be “wiped off the map” if the strategic city of Al-Qusair in central Syria falls to government troops, rebel forces said.

“We don’t want this to happen, but it will be a reality imposed on everyone,” Colonel Abdel-Hamid Zakaria, a spokesman for the Free Syrian Army in Turkey, told Al-Arabiya television yesterday. “It’s going to be an open, sectarian, bloody war to the end.”

Fighter planes and heavy artillery pounded the city today, the U.K.-based Syrian Observatory for Human Rights said in an e-mail. It said two people were killed during clashes between rebels and government troops backed by Hezbollah fighters, bringing the death toll from clashes at Al-Qusair in the last three days to more than 90.

Al-Qusair is close to the highway linking Damascus to the coast and has been a conduit for weapons from Lebanon to the rebels. The government offensive began with attacks on villages on the city’s outskirts last month.

Bassam al-Dada, a political adviser to the Free Syrian Army, said from Istanbul yesterday that Assad’s forces were still at the outskirts of the city. “Our people are still fighting inside and very strongly, but it’s not an easy situation,” he said.

“Failure to hold the town would be a major setback for opposition forces, impacting their ability to maintain clear lines of supply between safe havens in Lebanon and combat units in Syria,” said David Hartwell, senior Middle East analyst at IHS Jane’s.

The conflict in Syria, which began in March 2011, is increasingly dividing the country and the surrounding region along religious lines.

The Shiite Lebanese militia Hezbollah and Shiite-led Iran have been key allies of the Assad government, whose upper ranks come from the Alawite sect, derived from Shiite Islam. Leaders of the rebel army and political opposition are mostly Sunni, and they are backed by key Sunni powers including Saudi Arabia and Turkey.

The Arab League will hold an emergency meeting today to discuss Syria at the request of Qatar, Egypt’s state-run Middle East News Agency reported. Talks will focus on Al-Qusair and the participation of Hezbollah and the Iranian Revolutionary Guards in the fighting, the agency cited an unidentified league official as saying. Hezbollah is backed by Iran and is classified as a terrorist group by Israel and the U.S.

Hezbollah’s open involvement in the Syrian crisis is worrying because it pits the militia against Sunni extremist groups, according to Hartwell.

“While it may suit states such as Qatar, Saudi Arabia and even the United States to see this type of sectarian conflict develop as a means of retarding the regional influence of Iran (via Hezbollah) and al-Qaeda, the results in terms of long-term regional instability could be dramatic,” Hartwell said in an e-mailed note.

U.S. Secretary of State John Kerry is returning to the Middle East this week and is seeking to promote peace talks. Syrian opposition leaders, due to meet May 23 in Istanbul to choose a new leader, have rejected attendance at any peace conference that includes Assad or his inner circle.

The Syrian uprising began with peaceful protests that evolved into a civil war after the government began attacking the demonstrators. Radical Islamists, some with ties to al-Qaeda, have since joined the fight against Assad.

Like Loading...
‹ “Environmental genocide”: Native Americans quit talks over Keystone XL pipeline
In Colorado, Blacks Make Up 4 Percent Of The Population And 100 Percent Of Death Row ›