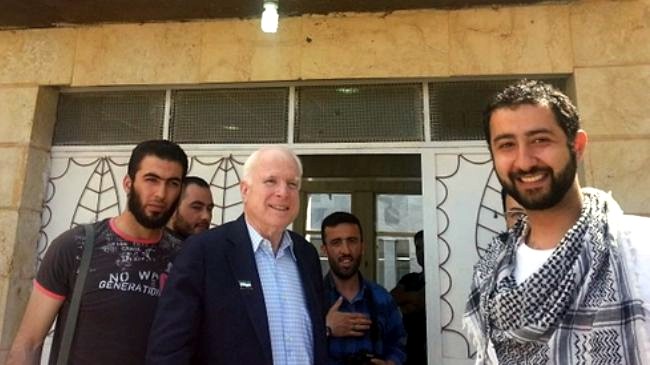 BEIRUT (Reuters) – U.S. Senator John McCain was photographed during a trip to Syria with a man implicated in the kidnapping by Syrian rebels of 11 Lebanese Shi’ite pilgrims a year ago, a Lebanese newspaper said on Thursday.

McCain, a Republican, has been an outspoken advocate for U.S. military aid to the rebels fighting President Bashar al-Assad and made a short, highly publicised trip to meet rebel commanders in Syria three days ago.

He has insisted that the United States could locate the “right people” to help among rebel ranks infiltrated with radicalised Islamists.

However, he may have crossed paths with men linked to a group notorious in the region for kidnapping the pilgrims, the Daily Star said.

The paper said that as well as McCain’s photographs with rebel commanders, one image showed the face of Mohammad Nour – identified by two freed hostages as the chief spokesman and photographer for the Northern Storm brigade that kidnapped them.

The image demonstrates the difficulty of identifying who the West might want to deal with and could possibly further inflame the delicate sectarian balance in a conflict that is spilling over Lebanon’s borders.

A spokesman for McCain said none of the people he met identified themselves as Nour and it had not been his intention to meet anyone of that name.

“A number of the Syrians who greeted Senator McCain upon his arrival in Syria asked to take pictures with him, and as always, the senator complied. If the individual photographed with Senator McCain is in fact Mohammad Nour, that is regrettable,” spokesman Brian Rogers said.

“But it would be ludicrous to suggest that the senator in any way condones the kidnapping of Lebanese Shia pilgrims or has any communication with those responsible. Senator McCain condemns such heinous actions in the strongest possible terms.”

The hostages were seized in northern Syria as they returned from a pilgrimage in Iran. Lebanese officials flew to Turkey on Thursday in the latest effort to secure the release of the remaining nine hostages.

McCain has denounced Democratic President Barack Obama for shying away from deeper involvement in the conflict. The uprising-turned-civil war has become increasingly bloody and has claimed more than 80,000 in over two years of conflict.

“The senator believes his visit to Syria was critical to supporting the many brave Syrians who are fighting for their lives and the freedom of their country against a brutal regime and its foreign allies that are massacring Syrian citizens on Syrian territory,” the spokesman said.