Syria calls on Turkish PM to resign over crackdown 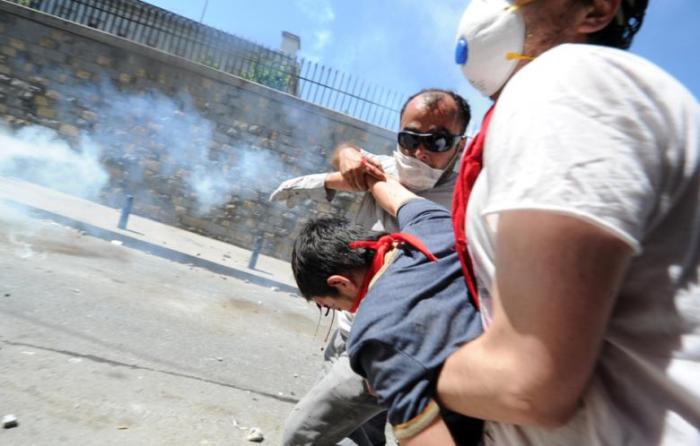 A bleeding protester is assisted after being attacked by riot police on 1 June 2013, during an anti-government protest in Taksim Square in Istanbul. (Photo: AFP – Bulent Kilic)

Syria gleefully turned the tables on Turkish Prime Minister Tayyip Erdogan on Saturday over his response to anti-government demonstrations, calling on him to halt the violent repression of peaceful protests or resign.

Erdogan, a former ally of Bashar al-Assad, turned against him after the Syrian uprising erupted in March 2011, which has since descended into a brutal civil war.

Syrian state television broadcast hours of live footage from Istanbul, where thousands of protesters clashed for a second day with riot police who fired teargas and water cannons.

The unrest was triggered by government plans for a building complex in Istanbul’s Taksim Square, long a venue for political protest, but widened into a show of defiance against Erdogan and his Islamist-rooted Justice and Development Party (AKP).

“The demands of the Turkish people don’t deserve all this violence,” Syrian television quoted Information Minister Omran Zoabi as saying. “If Erdogan is unable to pursue non-violent means, he should resign.”

“Erdogan’s repression of peaceful protest … shows how detached he is from reality.”

The Turkish prime minister turned against Assad after he said the Syrian leader had rejected Ankara’s advice for political reform in response to protests which erupted in Syria two years ago, inspired by uprisings across the Arab world.

It now hosts Assad’s political and military opponents, infuriating Damascus which accuses Erdogan of fueling the bloodshed in Syria.