Erdogan pledges ‘no more tolerance’ for protest amid police crackdown

Turkey has ‘no more tolerance’ for violent protest, Prime Minister Erdogan told the parliament. He was speaking as police used water cannons and tear gas to take over Taksim Square in Istanbul from anti-government activists.

Erdogan lashed out at the protesters as he was addressing MPs on Tuesday. In his speech he separated the peaceful protesters concerned with the development plans at Gezi Park from those in Taksim Square, who he said are responsible for violent clashes with police forces.

Erdogan’s speech came hours after hundreds of police walked into Taksim Square just after dawn and used tear gas and water cannons to fend of protesters attempting to enter it. Police removed protest banners from buildings overlooking the square. The prime minister hailed the move, which he described as tearing down “rags”.

Clashes erupted in the streets surrounding Taksim Square, while the police took over part of the square by marching in large formation and then driving out the remaining protesters by rounds of tear gas. 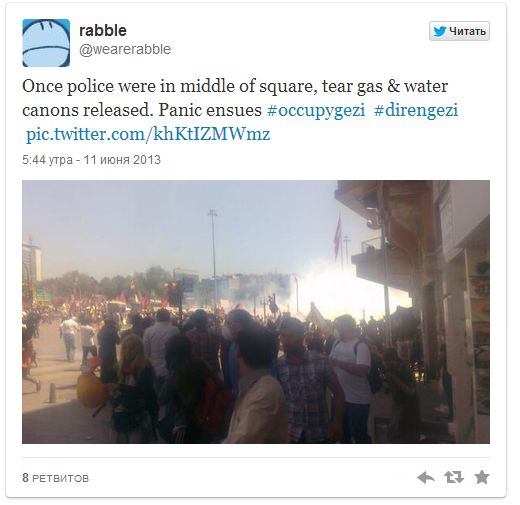 Some people threw Molotov cocktails, and one of the riot police cars was set on fire. Those protesting in Gezi Park have distanced themselves from the attackers in Twitter posts, some calling them “agents provocateurs,” who play along the official depiction of the protesters as marauders and extremists.

Soon after the police dismantled barricades erected by protesters at the square, some started to pile up another line of barricades further off.

The protesters also remained in the park, which the Istanbul Governor said “will not be touched.”