Part of the ancient Teotihuacán site, pictured above, is now underneath a Walmart. Walmart destroys Mexico’s cultural heritage for profit. An archaeologist gives her view.

As an archaeologist, I welcome the news that “[t]rade unions in Canada, the United States and Mexico are preparing protests and legal action against the Mexican subsidiary of Walmart” . That $24 million in bribes was allegedly paid by Walmart representatives to built the store at Teotihuacán is sad, but, in hindsight, makes a lot of sense. It takes a lot of gall to wilfully risk a country’s most beloved heritage site and, as it seems, it takes a lot of money too. However, I am sure Walmart felt it was worth it: if only a fraction of the 2.5 million annual visitors to Teotihuacán walk through Walmart’s doors, they would have easily recouped their ‘investment’.

Instead of focusing on corporate financial corruption at Teotihuacán, I would like to discuss corporate heritage corruption. The level of bribery exposed by the New York Times would be outrageous in any context, however this is not just any context, this is Teotihuacán. Teotihuacán was one of the most powerful and influential cultural complexes of the Americas. It was one of the largest cities in the world during its heyday. It is a UNESCO World Heritage Site, meant to be preserved as the cultural heritage of all humanity.

Now a portion of it is underneath a Walmart.

Teotihuacán, which is located only about 50km from Mexico City, has become an important symbol of Mexican identity. Even before the Spanish Conquest, the site as a ruin was an evocative place shrouded in nationalistic foundation mythology. As of yet, we do not know what the builders of the site called their own city, however the Aztec name for the place, Teotihuacán (which means something along the lines of “place where the gods were born”), displays the holiness, wonder, and importance of the site.

Lack of written records shroud Teotihuacán in mystery. What we do know comes from extensive archaeological excavations, the written records of the literate neighbouring Maya cultures, and even the deep cultural memories of the native peoples of the region. Teotihuacán was massive and by the 5th century AD, the city was sprawling: it covered over 36 square km and housed, based on some estimates, over 200,000 people. The Teotihuacanos built tremendous structures (the Pyramid of the Sun, for example, is 225 m across and 75 m tall), they developed innovative land reclamation schemes, and there is significant evidence that Teotihuacán was a planned city: purposefully laid out on a grid and zoned. The city appears to have had a significant influence over the region via extensive trade networks, political connections (it is though that Teotihuacanos were the founders of some of the most powerful Maya dynasties), and a outpouring of persuasive iconography. All of this without having developed the wheel, without any beasts of burden, and without the written word.

The Teotihuacan of today is both beautiful and popular.  Around 2.5 million people visit Teotihuacán each year and, according to a study conducted by the Mexican National Institute of Anthropology and History (INAH), on Teotihuacan’s busiest day of the year, controlled groups of 20 to 30 tourists visit the Pyramid of the Sun every 5 minutes. It is not a remote archaeological site without modern value. It is not an ugly ruin standing in the way of progress. It is a living monument to the past, a place for Mexicans and foreigners to reflect on who we were, who we are, and where we are going in the future.

A protest against the Walmart development

Thus when the word got out in 2003/4 that a Walmart store was to be built “near” to Teotihuacán, the archaeological community became extremely worried. We archaeologists often find our discipline difficult to explain to outsiders, specifically outsiders with an unyielding eye for unnuanced commercial development. Just because the core of Teotihuacán is massive and visible, doesn’t mean that the archaeology stops at the edge of the temple. Rather it extends, under the ground, in all directions, hidden from view but waiting to be exposed and studied. Just because you can’t see it doesn’t mean it is not there.

A particularly cringe-worthy example of this is the US Army’s use of the Iraqi site of Babylon. While some of the damage to the site was to visible and important ruins, at least some of the destruction was, apparently, due to a misunderstanding of the site map. Trenches were dug and heavy vehicles were parked in areas that, visually, looked empty but were actually within the ancient city walls. Such activity destabilised the previously-preserved underground archaeological remains and caused destruction that we are not even able to assess.

It is this periphery, these outer zones of sites, that are most at risk for destruction from development. It is difficult to convince planning authorities to protect this kind of past simply because people cannot believe what they cannot directly see. Even worse, it is in these areas that the average people lived: the people who built the massive pyramids, not the people who lived in them. The archaeology of real life, of workers, of farmers, of craftspeople, of the everyday is the hardest to preserve. It gets paved over and destroyed. 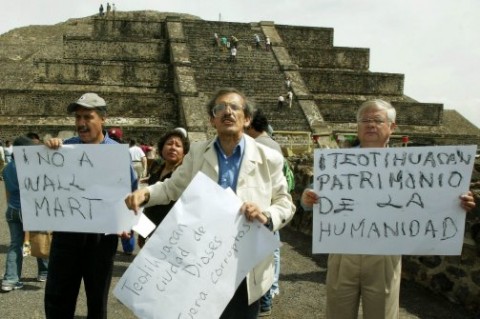 When archaeologists heard that a Walmart store was being opened near the site we thought “here we go again”. The maths seems simple: Teotihuacán covered 36 square km at its peak. The Walmart was being built only 1 km from the preserved tourist park of Teotihuacán and 2.4 km from the Pyramid of the Sun. The Walmart was being built on Teotihuacán. We were horrified but we, and our supporters were powerless to stop the construction. Archaeologists were accused of being in the way of progress, of preventing this new source of jobs to the area (never mind the threat to both locally-owned business and to the massive number of people employed at the archaeological park), of being unreasonable. Now it has been alleged that the construction was the result of significant corruption on the part of both Walmart and local officials. Perhaps the only thing we were standing in the way of was someone’s pay-off.

The Walmart is visible from the top of the Pyramid of the Sun.

According to UNESCO, Mexico has failed to adequately address this issue. In 2007 Mexico “did not submit the design, adoption and implementation of the integrated Archaeological Site Management Plan as requested by the World Heritage Committee in 2005”. They failed to submit a plan in 2008, rather submitted a report that “contains little new substantive information concerning the current situation to address the requests of the World Heritage Committee”. A 2009 report submitted to UNESCO by Mexico also “does not contain substantive information concerning the current status of the property, the intersectorial working group related to the impacts of uncontrolled development, and thus does not respond to all the issues raised by the World Heritage Committee”. A management plan was finally submitted in 2010 and a report on the implementation of this plan was submitted in 2012. Of note in this report is the statement that “access to areas not excavated or closed to the public need stronger restrictions to mitigate deterioration generated by accumulation of trash, structural wear and vandalism”. Eight years before a Walmart was built on just such an area.

I share in the outrage surrounding the allegations of corruption involved in this scandal, however I urge readers to not lose sight of what we may have lost. Luis Gálvez, a leader of the workers’ union of the state National Institute of Anthropology and History, has stated that the Walmart at Teotihuacan is an “offence against Mexico”. I would contend that it is more than that. It is an offence against our shared cultural heritage. Everyone who visits the site, everyone who climbs the Temple of the Sun to look out over the Valley of Mexico and imagine the vast ancient city, painted bright colours and sparkling in the Central American sun will either have to pretend not to see the Walmart or ask themselves why it is there.

That certainly isn’t what I would have wanted.