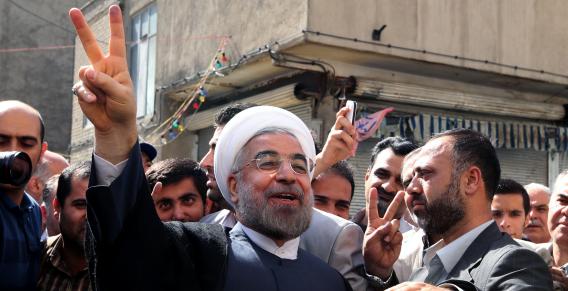 The Saturday news was reported by the country’s Interior Minister Mostafa Mohammad Najjar on state television.

“Mr Hassan Rouhani … got the absolute majority of votes and was elected as president,” Najjar said.

The moderate cleric mastered a lead of 50.71 per cent (18,613,329 votes) which means Iran avoids another round of polls next week.

In the wake of the election results Rouhani hailed his election as a “…victory for wisdom, moderation and maturity… over extremism,” he said in a statement according to local media, AFP reports.

A few hours before the results were announced  crowds began to gather near Rouhani’s headquarters in Tehran.

The supporters  chanted slogans like “Long live reform, long live Rouhani,” according to a reporter at the scene.

“Now you can think about the future of Iran’s politics and the ways of solving the problems of its people,”Khamenei addressed the newly elected president.

Former Iranian President Ali Akbar Hashemi Rafsanjani, who was on the list of presidential candidates this year, but did not pass the selection of the Supervisory Board, said that the country has experienced the “most democratic election in the world.”

The turnout on Friday was significant, with Iranians coming out from Tehran, to desert polling stations, to nomads’ pastures – where people would wait in line for hours in the blazing sun. In fact, voting had to be prolonged by five hours to accommodate the big numbers showing up. This is believed in Iran to be a result of boycotts planned by the liberals having been cancelled in favor of battling those on the other side of the political spectrum.

Female Iranian election officials check the IDs of the women voters as they cast their ballots during the first round of the presidential election at a polling station in Shah Abdolazim mausoleum, in southern Tehran, on June 14, 2013. (AFP Photo)

There was a total of six candidates running in the 2013 presidential election. All the other candidates trailed far behind with Tehran’s mayor Mohammad Baqer Qalibaf coming with 16.56 per cent (6,077,292 votes) and nuclear negotiator Saeed Jalili in the third place with 11.36 per cent (4,168,946 votes), according to preliminary results. Qalibaf and Jallili were coming in close to each other, in the second and third positions.

Jalili was said to occupy the middle ground between conservative and reformist candidates, with his Front of Islamic Revolution Stability. Jalili has been Iran’s chief nuclear negotiator since 2007.

Ali Akbar Velayati, 67, who represents the conservative Islamic Coalition Party, was said to be Jalili’s main rival in the race. He used to be minister of foreign affairs and is currently the foreign affairs advisor to Khamenei.

Of the six, Rouhani was considered to be the only true progressive, wanting to free political prisoners and rekindle relations with the West.

The international community acknowledged the election of Rouhani as Iran’s new president.

The US respects the choice of the Iranian people and hopes the that new president and his government will make “responsible choices” for a better future, White House press secretary, Jay Carney, said in a statement.

He also stressed that Washington is ready for “direct talks” with Iran over its nuclear program to find a diplomatic solution able to calm the international community.

While Russian President, Vladimir Putin has urged the international community to create closer ties with Rouhini.

In the wake of the result announcement France issued a statement saying it is also “ready to work” with him.

“The expectations of the international community with regard to Iran are significant, especially about its nuclear program and its involvement in Syria,” French Foreign Minister Laurent Fabius said in a statement, according to AFP.

While Britain urged Rouhani to ‘set Iran on a different course’  calling for a ‘constructive relationship’ with the West.

The last presidential elections of 2009 were marked by a wave of bitter protesting over a disputed outcome, with President Mahmoud Ahmadinejad being accused of rigging the election to stay in power for a second term. He is prevented by law from seeking a third one.

Despite this, there is an atmosphere of calm on the side of the ruling clerics, as opposition groups appear to be too fragmented or intimidated to have a repeat of 2009. Therefore, Rouhani’s victory (and he is the only cleric in the race) is not predicted to cause a big stir amongst the ruling elite.

Like Loading...
‹ US to give military support to Syrian rebels as ‘red line’ crossed
Past undetected: Nazi commander found living in US since 1949 ›