Home › U.S. News › Discrimination › It’s Juneteenth 2013. More Black people are in prison than were slaves and Paula Deen wants to bring slavery back

It’s Juneteenth 2013. More Black people are in prison than were slaves and Paula Deen wants to bring slavery back 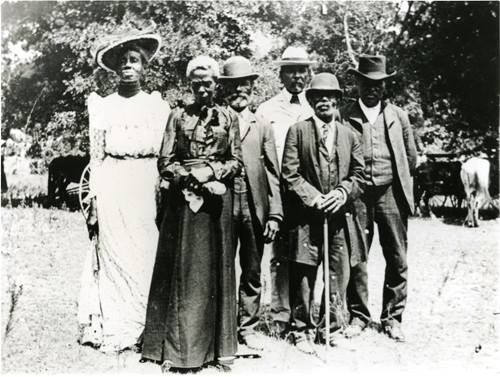 Today is June 19, or Juneteenth. While the Emancipation Proclamation was signed on January 1, 1863, slaves in Texas didn’t find out slavery was over until June 19, 1865, hence commemorating this date as the end of legal slavery in the US.

As Phillipe Copeland points out, the prison system was quickly positioned to take the place of slavery through the 13th amendment:

“Neither slavery nor involuntary servitude, except as a punishment for crime whereof the party shall have been duly convicted, shall exist within the United States, or any place subject to their jurisdiction.” (emphasis mine)

If the architects of the 13th Amendment really wanted to abolish slavery, why make an exception for criminal convictions? Given that slavery at that time was associated in the American imagination with being black, it’s fair to believe its authors had black people in mind when they included this language in the amendment.

This has led to a disturbingly racist reality. While slavery is officially over, our prison system is set up to limit the life possibilities and the take the labor of Black people, people of color more generally, and intersecting groups of marginalized folks.

I wonder what those newly emancipated Africans in 1865 Texas would think if they could travel through time to 2013? What would they make of a supposedly post-Emancipation America where there are more blacks in prison or jail, on probation, or on parole than were enslaved in 1850? Or that more black men are legally denied the right to vote because of felon disenfranchisement laws, than in 1870, when the 15th Amendment was ratified, prohibiting laws that deny the right to vote on the basis of race? How would they make sense of the fact that such things remain true even 50 years after many of their descendents faced bullets, bombs, water hoses, and dogs to secure civil rights that remained unprotected after the Civil War? A black felon living today can rightly ask how we can celebrate “emancipation” under such circumstances.

When discussing this issue the focus is usually placed on the incarceration of Black men, who statistics say make up 40.1% of the prison population. The rates of incarceration of Black folks in women’s prisons are ridiculously high, too. We’ve recently seen how obviously Black women are targeted through the case of incredibly unequal application of stand your ground laws – a Black woman fired a warning shot and got 20 years in jail, a white man killed someone and got off free. Additionally, the prison system is organized based on cissexist definitions of gender, by the notion that the gender assigned to a person at birth should determine where they’re incarcerated instead of their gender identity. And people of color who are perceived as falling outside gender norms (which are also white norms in this country) are uniquely targeted. Which means there are women in men’s prisons, men in women’s prisons, and people who aren’t men or women in both. CeCe McDonald is one of way too many trans women of color who have been targeted with incarceration.

The prison system is one major way in which the racism of US slavery lives on today. While a deposition from Paula Deen is not the same sort of systemic issue, it is representative of systemic bigotries. And, well, just look at Paula Deen’s statement from a deposition that’s been making the news on this Juneteenth. Here’s her explanation of the inspiration for wanting to hire Black cater waiters to play slaves:

The whole entire waiter staff was middle-aged black men, and they had on beautiful white jackets with a black bow tie. I mean, it was really impressive. That restaurant represented a certain era in America… after the Civil War, during the Civil War, before the Civil War… It was not only black men, it was black women… I would say they were slaves.

She also admitted to using the N word with employees. That is some extremely overt racism that’s had to be excused or even accepted repeatedly for Paula Deen to get to the powerful position she’s in today.

Juneteenth is a time to remember and celebrate the end of slavery, and is also an opportunity to highlight a legacy of resistance. But while we remember that a state full of Black people were kept as chattel slaves for over two years after slavery was officially over, it’s also important to recognize that the legacy of slavery is not something that’s just in this country’s past.