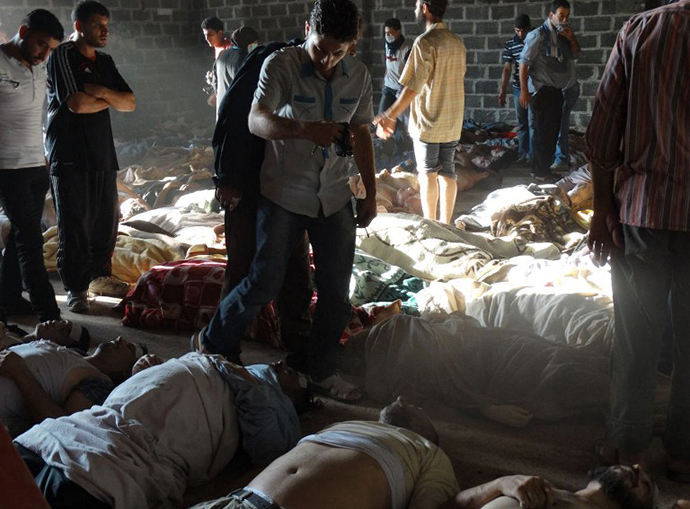 A handout image released by the Syrian opposition’s Shaam News Network shows people inspecting bodies of children and adults laying on the ground as Syrian rebels claim they were killed in a toxic gas attack by pro-government forces in eastern Ghouta, on the outskirts of Damascus on August 21, 2013. (AFP Photo)

Conflicting reports emerged of recent chemical weapons use in Syria. This comes on the same day that the UN inspectors arrive in Damascus to investigate allegations of use of toxic arms. The casualty figures range from dozens to almost 1,300 deaths.

Initially, Al-Arabiya posted news of 280 victims on Twitter. Later, the news outlet upgraded the figure up to 1,188 victims quoting the Free Syrian Army.

The Syrian Observatory for Human Rights had a much lower figure, claiming dozens of people were killed, including children.

News agencies such as Reuters and AP mostly put the numbers of victims at hundreds, but say that reports can’t be independently verified.

George Sabra, the president of the Syrian National Council – Syria’s main opposition group – claimed that some 1,300 people were killed in government forces attacks near Damascus on Wednesday, and alleged that chemical weapons were used.

Speaking at a news conference in Istanbul, Sabra also claimed it was “not the first time the regime has used chemical weapons.” He added that he considered the Wednesday attack a “turning point” in Assad’s military operations, alleging that the chemical were used “for annihilation rather than terror.”

Meanwhile, an RT Arabic correspondent managed to contact some locals who say they haven’t witnessed any “poisonous attack” in the area. However, they point out that gunfire can be heard.

Syrian authorities issued a statement saying there is “no truth whatsoever” to reports of chemical weapons use near Damascus.

The Ghouta region on the outskirts of Damascus is known for its opposition inclinations and has been the site of past clashes between government forces and the rebels.

“Jabhat al-Nusra has had a long-time presence there and the region has borne the brunt of sustained military pressure for months now,” Charles Lister, an analyst at IHS Jane’s Terrorism and Insurgency Center, told Reuters, referring to a hardline Sunni Islamist rebel group allied to al-Qaeda.

The European Union has called for a “thorough and immediate” investigation of an alleged chemical attack in Syria.

“We have seen with grave concern the reports of the possible use of chemical weapons by the Syrian regime. Such accusations should be immediately and thoroughly investigated,” said EU foreign policy spokesman, Catherine Ashton.

“The EU reiterates that any use of chemical weapons, by any side in Syria, would be totally unacceptable.”

The UN Security Council (UNSC) said that conflicting reports of a chemical weapons attack in Syria need to be investigated, adding that such claims represent a “serious escalation with grave humanitarian consequences.”

The news emerged on the day UN inspectors arrive in Damascus to examine suspected cases of chemical weapons use in the war-torn country.

The UN expert and the head of the current mission to Damascus, Swedish scientist Ake Sellstrom, told news agency TT that while he had only seen TV footage, the high number of casualties reported sounded suspicious.

“It sounds like something that should be looked into,” he told TT by phone. “It will depend on whether any UN member state goes to the secretary-general and says we should look at this event. We are in place.”

He said that the high numbers of killed and wounded being reported are “suspicious.”

Among those who also voiced their concern are the Arab league spokesman and UK foreign secretary William Hague.

However, the Assad government denied there had been any use of chemical weapons. Dr. Abdulqader Azouz told RT’s Arabic channel Rossiya al-Yaum the Syrian army was “winning the battle against the rebels” and there was no need for chemical weapons.

“America has always put the pretext of using chemical weapons on the top of its agenda as a means of intervention in Syria,” Azouz told Rossiya al-Yaum. He went on to stress that the Syrian government has pledged “its commitment to full cooperation with the investigation committee and other specialized committees.” 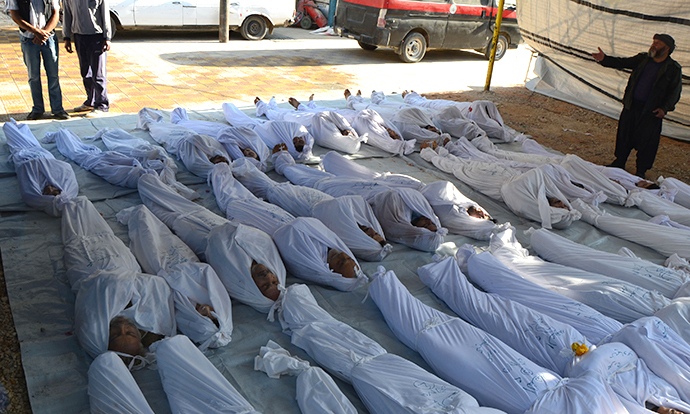 Syrian activists inspect the bodies of people they say were killed by nerve gas in the Ghouta region, in the Duma neighbourhood of Damascus August 21, 2013. (Reuters)

Several videos showing alleged victims of the attack emerged online. The footage shows people lying on the ground, moaning and shouting, with some of them unconscious. One of the videos shows a man shivering violently while lying on the ground, as though he has a fever. Another piece of footage shows a grief-stricken father whose daughters were apparently killed in the attack.

Some footage allegedly showing the aftermath of the attack has been compiled by Reddit.com news portal.

Meanwhile, Syrian state news outlet Sana reported there had been strikes on rebel strongholds in the area which “demolished a number of terrorists’ hideouts, leaving many of them dead and injured.”

Sana said there had been strikes in the villages of Jouber, Erbin and Zamalka in Damascus Countryside.

Weeks ago, the United Nations pointed out that an agreement had been reached with Assad’s government as to the three locations that UN inspectors would be examining, with the mission led by Swedish scientist, Ake Sellstrom. 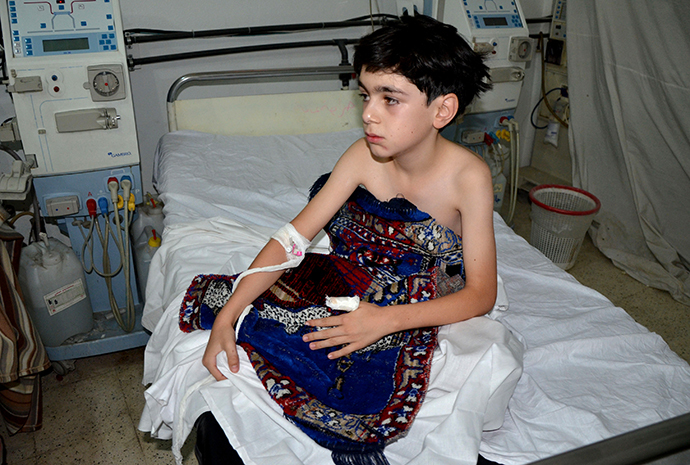 A boy, affected by what activists say is nerve gas, is treated at a hospital in the Duma neighbourhood of Damascus August 21, 2013. (Reuters)

In July, Russia submitted to the UN its analysis of samples taken west of Aleppo. Russia’s findings indicated that it was rebels behind the Khan al-Assal incident, in which more than 30 people died.

The US contradicted the Russian findings, stressing they had their own data which proved that the government forces were behind the attack. However, Paulo Pinheiro, chairman of the UN commission’s inquiry into rights violations in Syria, said the evidence provided by the US did not meet required standards.

The Obama administration repeatedly called the use of chemical weapons in Syria “a red line.” 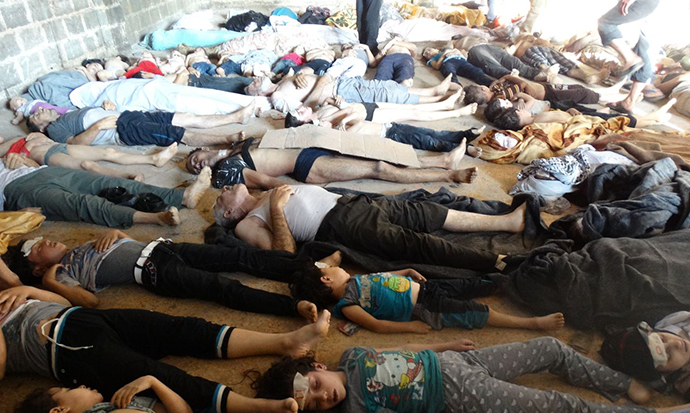 A handout image released by the Syrian opposition’s Shaam News Network shows bodies of children and adults laying on the ground as Syrian rebels claim they were killed in a toxic gas attack by pro-government forces in eastern Ghouta, on the outskirts of Damascus on August 21, 2013. (AFP Photo)