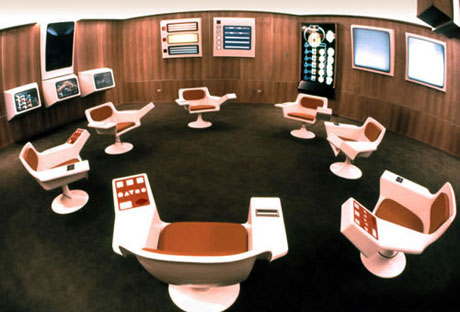 Leigh Phillips tells the story of Cybersyn, Chile’s experiment in non-centralised economic planning which was cut short by the 1973 coup

The story of Salvador Allende, president of the first ever democratically elected Marxist administration, who died when General Augusto Pinochet overthrew the young administration in a US-backed coup on 11 September, 1973, is well known amongst progressives. But the human rights horrors and tales of desaparecidos have eclipsed – quite understandably – the pioneering cybernetic planning work of the Chilean leader, his ministers and a British left-wing operations research scientist and management consultant named Stafford Beer. It was an ambitious, economy-wide experiment that has since been described as the ‘socialist internet’, an effort decades ahead of its time.

In 1970, the Allende government found itself the coordinator of a messy jumble of factories, mines and other workplaces that had long been state-run, others that were freshly nationalised, some under worker occupation and others still under the control of their managers or owners. An efficient strategy of coordination was required. The 29-year-old head of the Chilean Production Development Corporation and later finance minister Fernando Flores – responsible for the management and coordination between nationalised companies and the state, and his advisor, Raul Espejo, had been impressed with Beer’s prolific writings on management cybernetics, and, like Allende, wanted to construct a socialist economy that was not centralised as the variations on the Soviet theme had been.

Allende, a doctor by training, was attracted to the idea of rationally directing industry, and upon Flores’ recommendation, Beer was hired to advise the government, and the scheme he plunged himself into was called Project Cybersyn, a ‘nervous system’ for the economy in which workers, community members and the government were to be connected together transmitting the resources they had on offer, their desires and needs via an interactive national communications network. The whole idea would seem, frankly, eccentrically ambitious, even potty, if today the internet were not such a quotidian experience.

Although never completed, by the time of the coup, the advanced prototype of the system, which had been built in four months, involved a series of 500 telex machines distributed to firms connected to two government-operated mainframe computers and stretched the length of the narrow country and covered roughly between a quarter and half of the nationalised economy. Factory output, raw material shipments and transport, high levels of absenteeism and other core economic data pinged about the country and to the capital, Santiago – a daily exchange of information between workers and their government, easily beating the six months on average for economic data to be processed in this way in most advanced countries.

Paul Cockshott, a University of Glasgow computer scientist who has written about the possibility of post-capitalist planning aided by computing, is a big admirer of Cybersyn as a practical example of the general type of regulation mechanism he advocates: ‘The big advance with Stafford Beer’s experiments with Cybersyn was that it was designed to be a real-time system rather than a system which, as the Soviets had tried, was essentially a batch system in which you made decisions every five years.’

Staff tallied the data and seven government surveyors (seven being the largest number of people who can comfortably participate in a discussion) viewed real-time economic processes for immediate decisions from a space-age, Star-Trek-like operations room, complete with Tulip swivel chairs with built-in buttons, but the aim was to maintain decentralised worker and lower-management autonomy rather than to impose a top-down system of control. The intention was to provide an Opsroom overseeing each industry and within each plant. At the factory level, it was planned that workers’ committees would run the Opsroom. Figures were avoided in favour of graphics displays under the belief that people should be able to engage in economic self-government without formal mathematical or financial training. Vast, economy-wide co-ordination is not the same as centralisation.

When the government faced a CIA-backed strike from conservative small businessmen and a boycott by private lorry companies in 1972, food and fuel supplies ran dangerously low. The government faced its gravest existential threat ahead of the coup. It was then that Cybersyn came into its own, when Allende’s government realised that the experimental system could be used to circumvent the opposition’s efforts. The network allowed its operators to secure immediate information on where scarcities were at their most extreme and where drivers not participating in the boycott were located and to mobilise or redirect its own transport assets in order to keep goods moving and take the edge of the worst of the shortages. As a result, the truck-owners’ boycott was defeated.

After that other September 11 almost forty years ago, when the bombs fell on La Moneda, the presidential palace where Allende took his own life rather than surrender to Pinochet’s fascists, the fires that destroyed democracy in Chile also took the world’s first non-Stalinist [sic] experiment in economy-wide planning with them, replaced by another economic experiment of an altogether opposite character: the monetarist structural adjustment of Milton Friedman, infamously replicated by Margaret Thatcher and her dozens of imitators.

Today, 40 years later, systemic change is on the table again. After decades of defeats, there is a burgeoning – if still fragile – sense that far-reaching transformation going beyond a tinkering with the system might be necessary and, crucially, achievable.

So you would think that the period would be ripe for discussion of a post-capitalist economics, for a blossoming of competing concrete proposals of what a thoroughly different economic system might look like. Yet very few have engaged in the hard thinking about what could happen ‘the morning after’ a presumed victory. We are undergoing the biggest economic disaster since the 1930s, an unprecedented global slump that may turn out to be worse than the Great Depression, and no one wants to theorise about the day after tomorrow, fearful that we may be ‘building castles in the air’.

This is the utility of Allende’s Cybersyn for us in 2013. Cybersyn is not some quirky historical curiosity. Nor was it a utopian dream. Rather, Allende’s experiment was a real-world example of post-capitalist planning that needs to be scrutinised in great depth and then appraised to see what bits of it, if any, can be redeployed were ordinary people once again to win power.