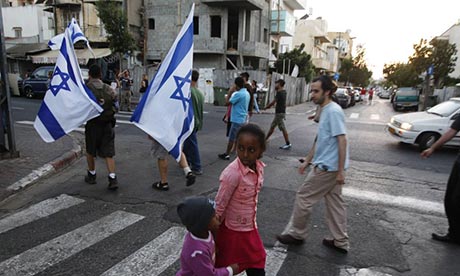 Israel plans to soon begin deporting migrants from Eritrea and Sudan, who number more than 50,000, back to Africa via Uganda, officials said.

Israel regards most of the Africans as illegal visitors in search of jobs, and largely rejects the position of human rights groups that many fled their countries in search of political asylum.

A statement late on Thursday from interior minister Gideon Sa’ar said Israel would soon begin a staged process of deporting the migrants, most of whom have crossed the border with Egypt since 2006.

Sa’ar said an agreement had been reached with Uganda to absorb the “infiltrators”, who would soon be urged “to leave of their own free will”.

The chairwoman of parliament’s committee on foreign workers, Michal Rozin, speaking by phone, said there were “rumours” that Uganda may have agreed to the arrangement in exchange for a deal for money and weapons.

There was no immediate comment from officials in Kampala.

“In the first stage, we will focus on raising awareness within the population of infiltrators while helping them with the logistics of their departure, including costs, airfare and dealing with the possessions they accumulated while they were in Israel,” Sa’ar said.

Later the state would set a deadline by which “certain sectors within the infiltrator population” would be asked to “willingly” leave the country.

Once the deadline passed, the state would stop issuing extensions on visas and would begin enforcing laws that prohibit the employment of illegal migrants, the minister said.

Rozin urged the government to expose more details of the plan, including whether there were assurances that the migrants would not be forcibly repatriated to Sudan or Eritrea, saying that in these countries “we know many would be at risk of their lives”.

Human rights groups say Israel has jailed hundreds of African migrants and taken other steps to get them to agree to leave the country.

A few thousand are believed to have left Israel in the past year since a law enacted in 2012 authorising migrants who lack any official residence permits to be jailed for up to three years, said Sigal Rozen, policy co-ordinator for Hotline for Migrant Workers (HMW), an Israeli human rights group.

In July, a group of 14 Eritreans were repatriated after receiving $1,500 each from Israeli authorities, in what HMW denounced at the time as a “grave human rights violation”, citing Eritrea’s poor human rights record.

At least one group of Africans was flown out of Israel to South Sudan in the past year and other migrants have been offered cash to leave. Some 2,000 Africans are being held in the southern detention centres.

A fortified fence along Israel’s border with Egypt’s Sinai has largely stemmed the flow of migrants, who walked across what was a porous frontier at a rate of up to 2,000 a month in 2011.