Lakotas and Dakotas face off with white supremacists in Leith, North Dakota 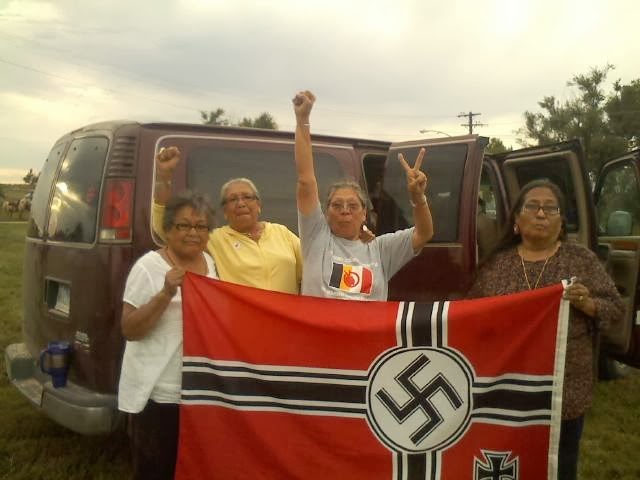 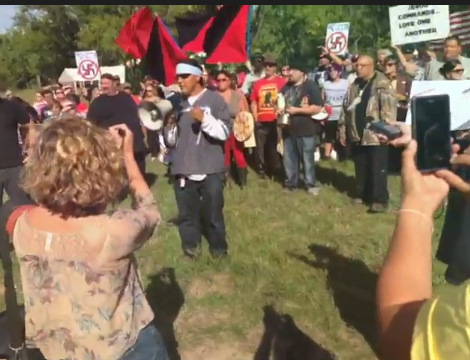 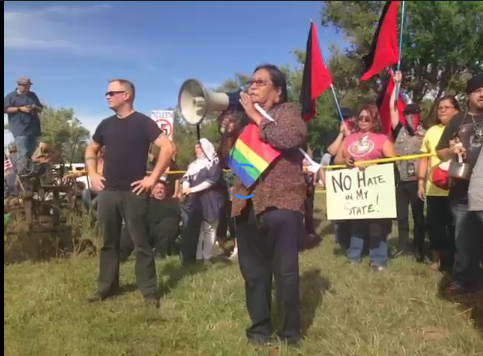 “The mothers will take you on!” Screen capture by Censored News 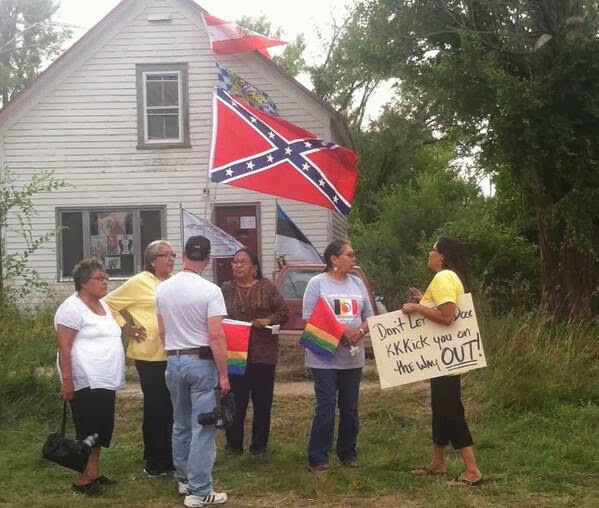 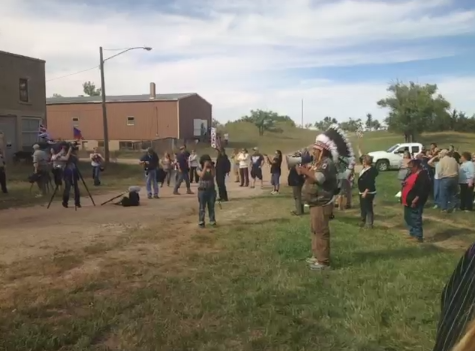 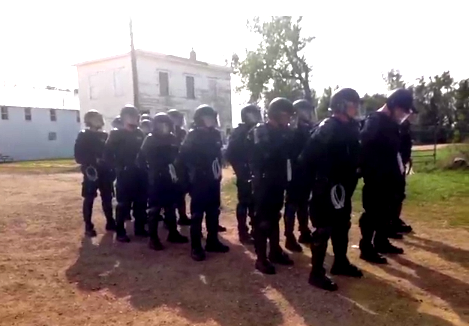 Riot team with no badges to identify them Censored News screencapture

Lakotas and Dakotas face off with white supremacists in Leith, North Dakota 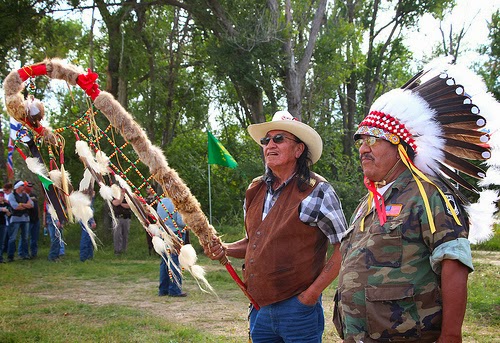 LEITH, North Dakota — Lakotas and Dakotas arrived today in Leith, near the Standing Rock Indian Nation, to defend the town from an invasion and takeover by white supremacists.

Chase Iron Eyes, Lakota from Standing Rock, said on arriving in Leith, “We don’t try to persuade anyone. Warriors do not need to be coerced; we go because we love our children.”
Iron Eyes said Standing Rock Lakotas arrived to the sound of war cries.

Lakotas and Dakotas led by Standing Rock and Last Real Indians delivered powerful words during the rally. They were joined by non-Indians of many races from the region who arrived by caravan from Bismarck. Several hundred people rallied against the white supremacists known for violence and hate crimes.

“You are in Dakota territory.”

“Lakota means allies, Dakota means peace, and that is what we continue to struggle for in this land.”

“My uncle stormed the shores of Normandy to eliminate your forerunners, the Nazis, that killed millions all over the world, so we know what your intent is, to criminalize Dakota territory.

“You will not do it. The grandmothers will stand up to you. The women will take you on.”

The rally began before the Town Hall meeting, with the crowd shouting, “Go home!”

Chase Iron Eyes told the crowd, while facing the white supremacists, “We came here today to our country. We have been living here for tens of thousands of years. We know we have a harsh history between the races.”

“But as I look where the Nazi flag flies, where the swastika flies, I know we have called their bluff. Because they who spread hate rely on other white people to fear non-white people.”

“We have evolved. We do not hate white people.”

“You have come here thinking that you can exploit the ignorance of white people.”

Facing the white supremacists as they were arriving, Iron Eyes said the Lakotas will not react until they are attacked and named the Indian Nations present.

“We are evolved human beings. I think you know you represent a dying cause.”

“You have nothing. That swastika is even our symbol.”

“You have appropriated our intellectual properties because you have none.” 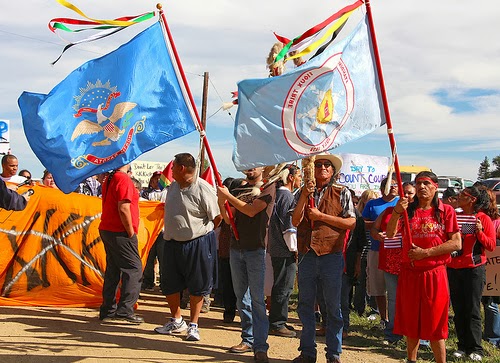 “You’re 30 miles from our border. If you think we’re going to let you come into our territory and affect our children, you’ve got another thing coming. What you see here are the mouthpieces. The warriors aren’t even here. You have come here thinking we are going to react out of fear, but we won’t do that. We are Dakota and Lakota people.”

“You are a dying cause.”

Listen to this address of Chase Iron Eyes:
http://vocaroo.com/i/s00ova5dzK70

State troopers and a riot squad were assembled, with badge numbers removed, as the town hall began. Inside the town hall, the National Socialist Movement attempted to convince the town they are not racists. After music played with bagpipes, the National Socialist Movement, known for its acts of violence and hate crimes, attempted to play the role of victims.

However, they made it clear they were here to take over this town.

Lakotas were not leaving at the end of the day, so riot police formed a walking line with the intent of pushing people out of the tiny town of 24 people. After the Town Hall, the National Socialistic Movement, and Craig Cobb who bought up the land and was basking in media glory, went inside one of the little deteriorating houses with the police lined up outside to protect them.

Protesters appeared to leave with no police problems, and shouted war cries.

The daylong events inside and outside the town hall were live streamed by Unedited Media. 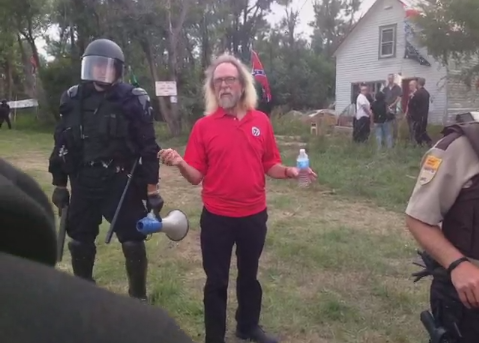 At the end of the day, one Lakota yelled, “You are on Treaty territory, you are not welcome here!” at Cobb, who bought up properties here for white supremacists.

Earlier, Native Americans called for peacekeepers to protect the Treaty Territory and support the local community of Leith on Sunday and Monday.

The Last Real Indians sent out this message, which was shared 315 times in 40 minutes on Saturday night on Facebook. On Sunday morning, it had been shared 725 times in eight hours.

On Saturday night, Last Real Indians, comprised of Native American journalists, said, “Tomorrow is the Caravan to Leith, North Dakota, where the white supremacists movement will host a meeting to protect their hateful pursuit to take over that town.” 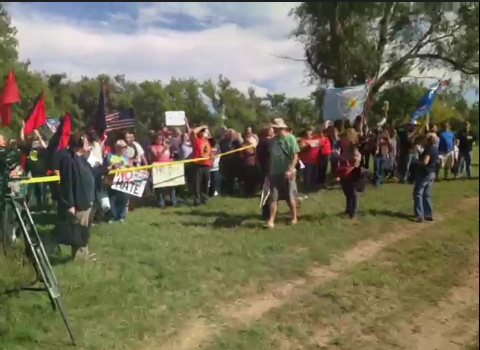 “We need our vets, our brothers, our hunters, and anyone that cares to protect the safety of our children to come help in our peacekeeping force. Be there by 1 pm Central to be sure we join the good evolving citizens of North Dakota to protect Treaty Territory.”

On the radio show, Iron Eyes said these white supremacists carry out terrorism and are a threat to local children and families.

“I know they are violent, and probably armed,” Iron Eyes said, pointing out that all races will join together on the caravan to oppose this. He said the Aryan population will soon vanish and they are acting out of desperation.

UnityND organized a caravan on Sunday from Fargo and Bismarck to oppose the white supremacist takeover of Leigh, located in the southwest corner of North Dakota. http://unitynd.com/

The UK Guardian reported, “The tiny town of Leith in North Dakota is bracing itself for a potentially turbulent weekend. Its 24-strong population is set to be overrun by opposing busloads of neo-Nazis attempting to create a white supremacist community there and their anti-racist detractors.”

“Jeff Schoep, commander of the American National Socialist Movement (NSM), is preparing to travel from Detroit to Leith to hold a town-hall meeting and press conference on Sunday afternoon. On the NSM website, he describes the trip as a ‘gesture of goodwill,’ but goes on to say ominously that the aim is to ‘plant the seeds of National Socialism in North Dakota. http://www.theguardian.com/world/2013/sep/21/north-dakota-neo-nazi-community-leith

The neo-Nazis are the second wave of decay for small towns in North Dakota — including American Indian communities — where the oil and gas industry has already shattered the communities, poisoned the air, water and soil, infested communities with crime and destroyed lives in an Armageddon to community life. The Mandan, Hidatsa and Arikara Indian Nation in North Dakota is among those devastated by oil and gas drilling that has resulted in local deaths. 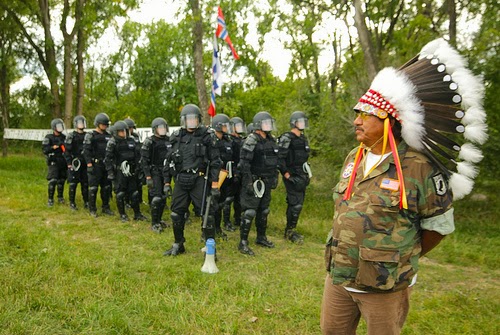 Last Real Indians, proving that journalists can take a bold stand and make a difference, also posted this statement from the town of Leith, ND:

“We are deeply disturbed that one of the residents of our small community has invited hate groups to our town and to the state of North Dakota. One of these hate groups, the National Socialist Movement, is planning to hold a meeting in our city hall on Sunday afternoon, and raise neo Nazi flags on property around our town.

“The values of our town include safety and acceptance for everyone. We stand firmly against the bigoted views of this group, and will not be participating in their events.

“We urge other North Dakotans to peaceably join us in telling hate groups they are not welcome in our state.
“We have been told by other communities where the National Socialist Movement, a neo Nazi group, has tried to organize that the words and actions at their events are designed to provoke confrontation.

“We would rather draw attention to the good people who live in our town, in our county and in our state. While the neo Nazis are meeting in our city hall, we will be gathering in and around Leith to show that we stand together against hate, and stand with all North Dakotans.”

Photo below shared from Last Real Indians: In 1958, the Ku Klux Klan KKK planned a rally in Maxton, NC to harass Lumbee tribal members and other non-whites. On the night of their rally over 500 Lumbee men showed up to the KKK rally with guns and sticks. The Lumbees went on the attack. The KKK members were routed and ran out of town in what is now called the Battle of Hayes Pond. 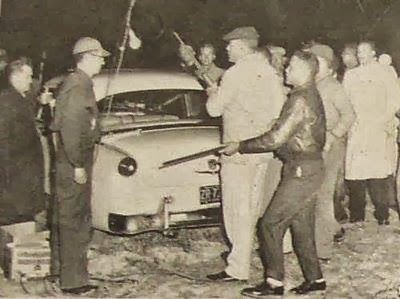